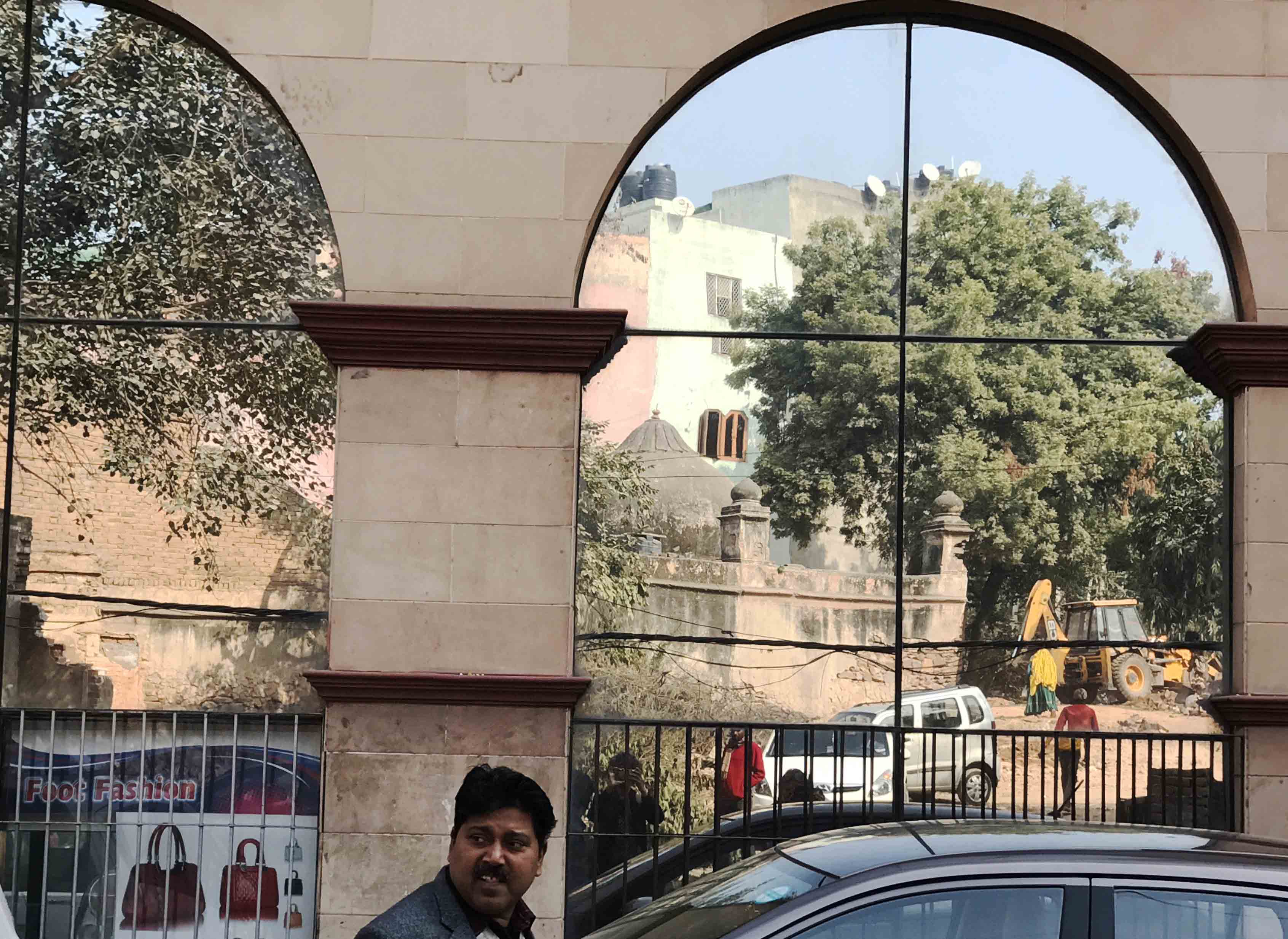 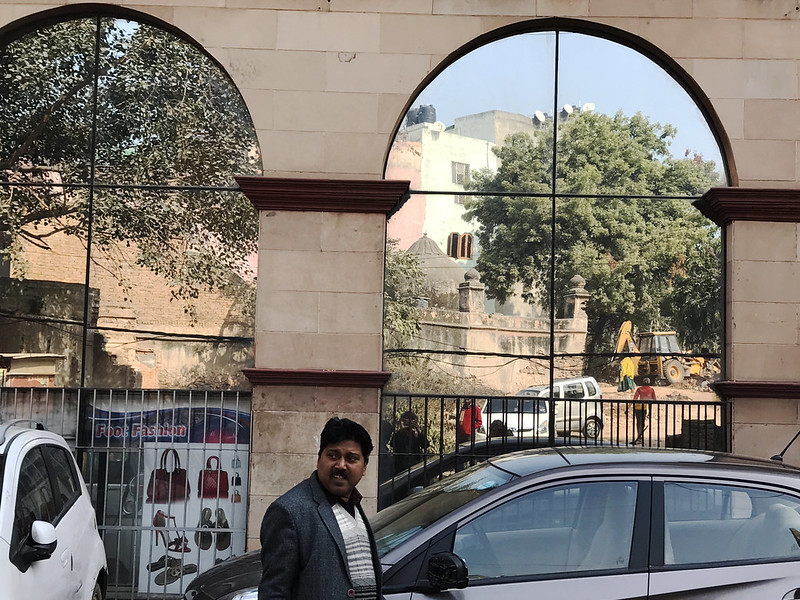 Outrageous. No other word to describe it. A new garish pink building, still splotched with cement stains, now stands right beside what is probably the last important Mughal monument in India—Zafar Mahal. The gap between these two structures is as narrow as the bridge of your nose.

It’s a depressing welcome to Mehrauli, a historic district in Delhi that is even older than Old Delhi. It has hundreds of monuments that can be traced to almost every empire that ruled this part of the subcontinent. Dozens of beautiful monuments lie within what is called the Mehrauli Archaeological Park. The celebrated Qutb Minar, too, is in Mehrauli. That tower has been here for hundreds of years and might outlive all of us but the same thing cannot be said for many of the other monuments in the area.

In December 2016, the Delhi high court asked the Delhi Development Authority and the South Delhi municipal corporation to help the Indian National Trust for Art and Cultural Heritage (Intach) identify heritage structures listed in the urban development department’s notification. According to a report in The Hindu, the department had listed 775 heritage sites and structures in the city, many of them in Mehrauli. Intach reported that many of these listed structures can no longer be found.

The other day The Delhi Walla took a walk in Mehrauli to see the monuments that still stand. Instead of exploring the sprawling archaeological park (at present in danger of being encroached upon), I confined myself to walking around the village. Even then I came across many monuments, known and not known, some of which looked so endangered that they might disappear in our lifetime. Let me give you a sense of what is at stake. 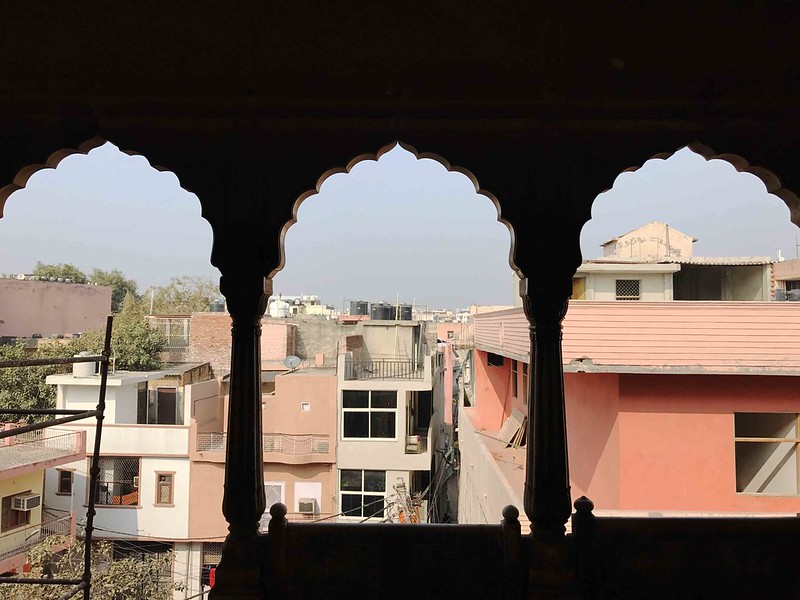 Cracked columns, defaced walls and grounds littered with cat shit. The last important monument erected by the Mughals stands severely damaged. People urinate against the walls. Boys play gilli-danda in the courtyards and the older men, cards. It is not unusual to come across beer cans. This time, however, I chanced upon a discarded track pant flung near a grave.

Zafar Mahal was built by Akbar II, one of the lesser-known Mughal emperors. The dynasty died with his son, Bahadur Shah Zafar, who was exiled by the British to Rangoon after the 1857 uprising. A grassy patch in a marbled enclosure in Zafar Mahal is said to be the space originally marked by Zafar as his burial ground. It might sound like I’m making this up for effect, but I saw a flip-flop lying upturned on the patch where the last Mughal wanted to be buried (see photos 5 and 6 below).

Even so, this wasn’t the most dismal aspect of Zafar Mahal. There’s a drab-looking apartment complex coming up just next to it. The building is so close that if someone spits from one of the windows there, it will fall on the monument. 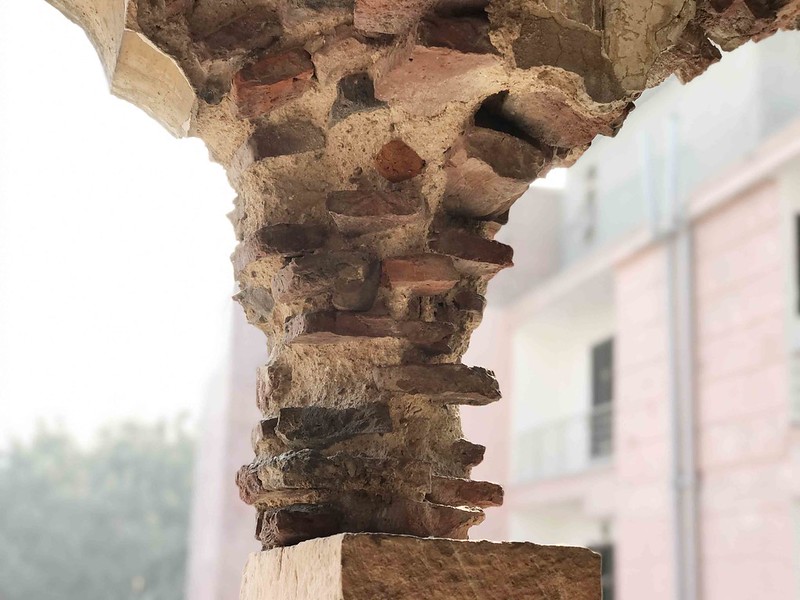 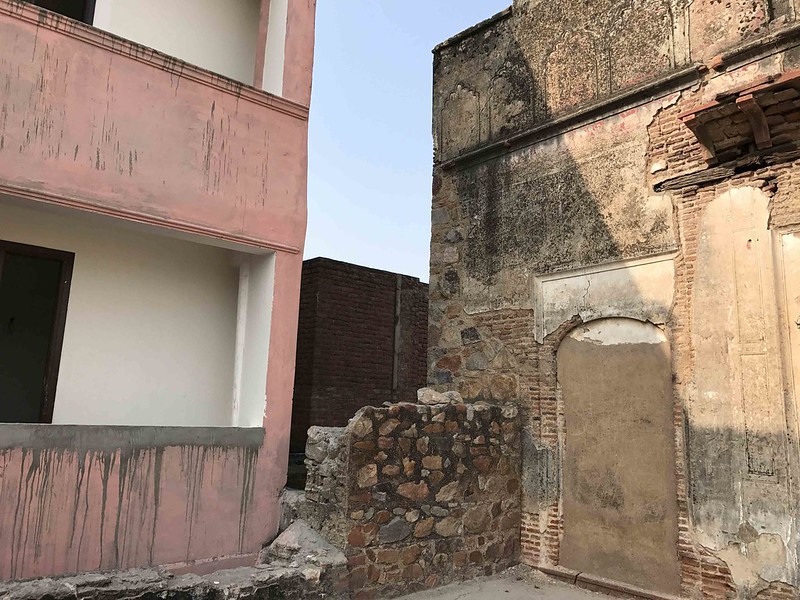 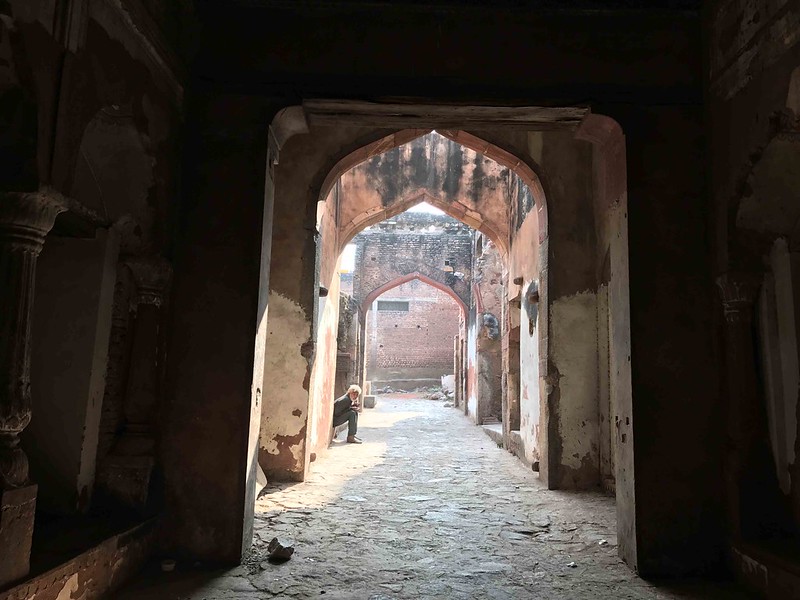 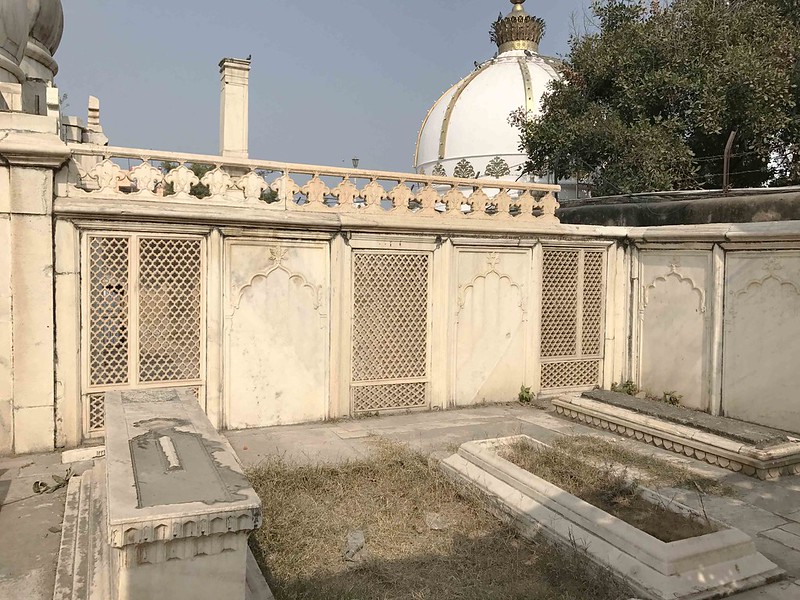 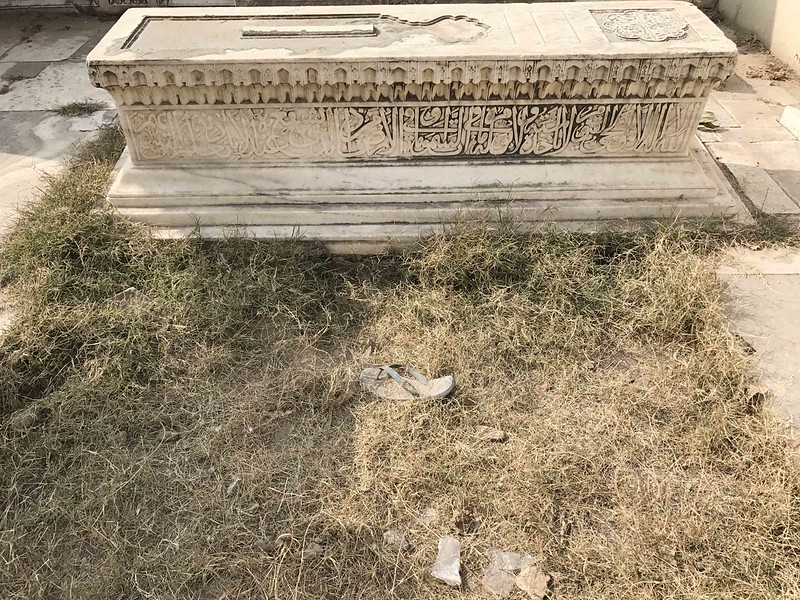 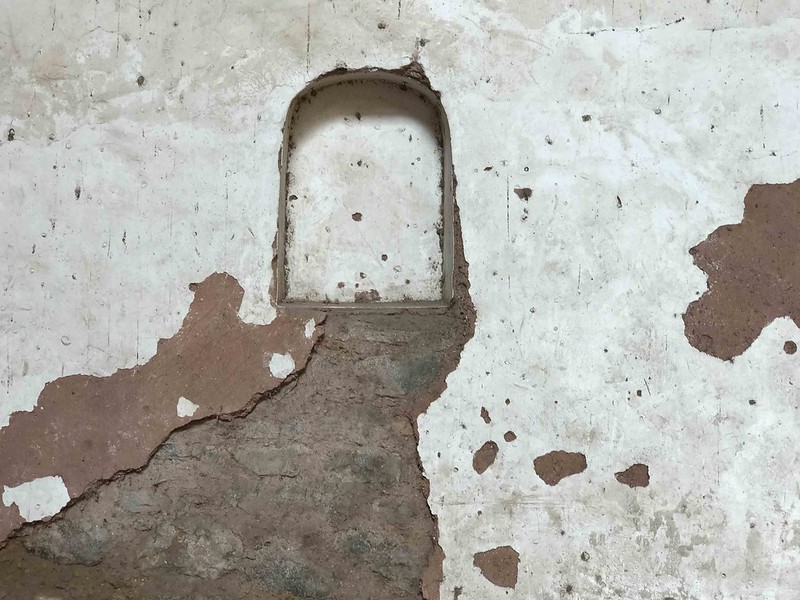 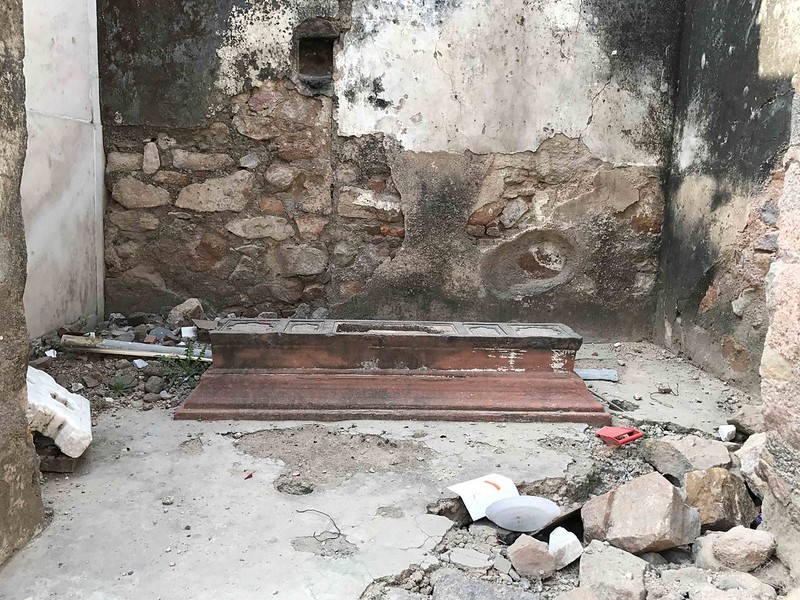 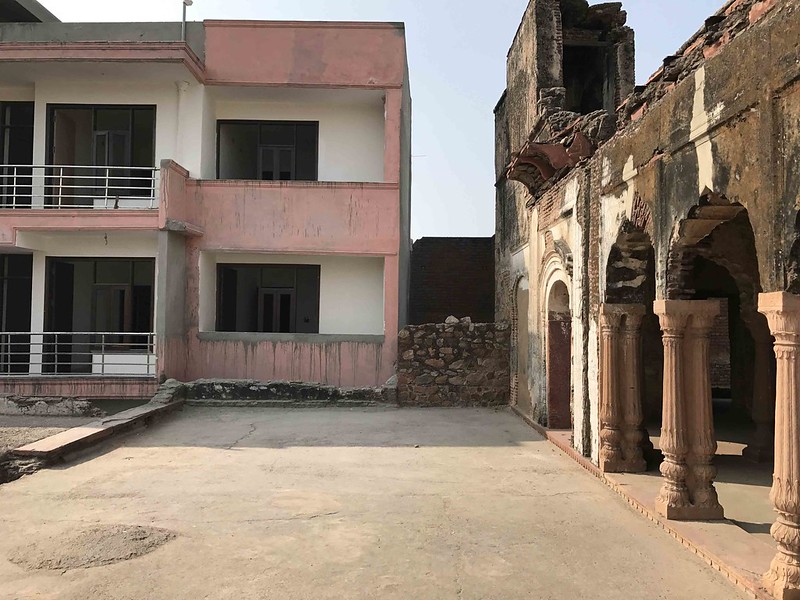 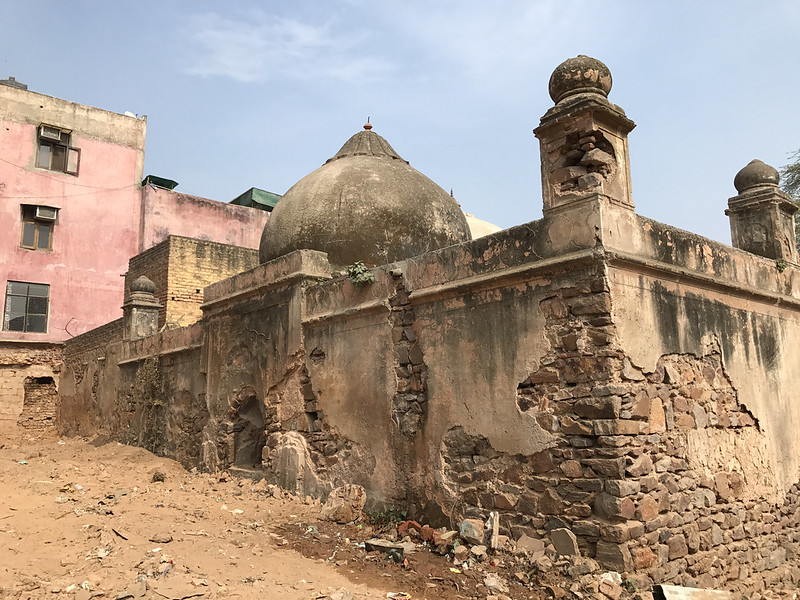 The walls look melancholy. The polished outer layer has fallen off at many places, revealing the stones beneath. The ruin appears to be a mosque since a dome stands above its Mecca-facing wall. This is the rear of the monument. There is no way of entering the mosque—a private residence has come up right in front, sealing the entrance. As I step into the house, an angry woman comes running, yelling, “Who gave you permission to enter?” 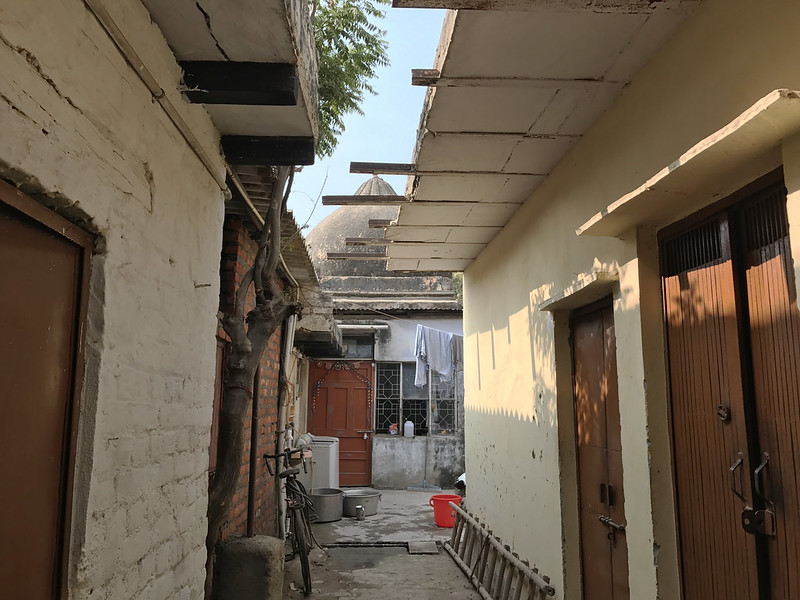 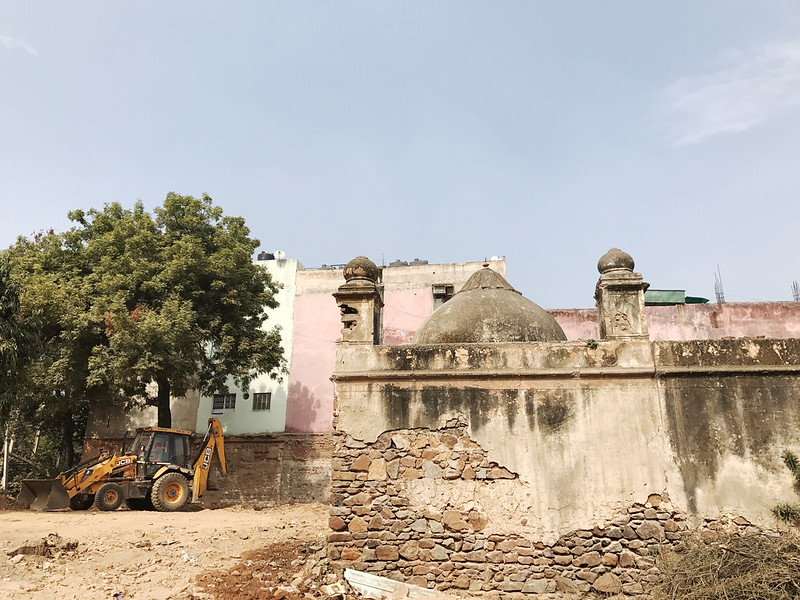 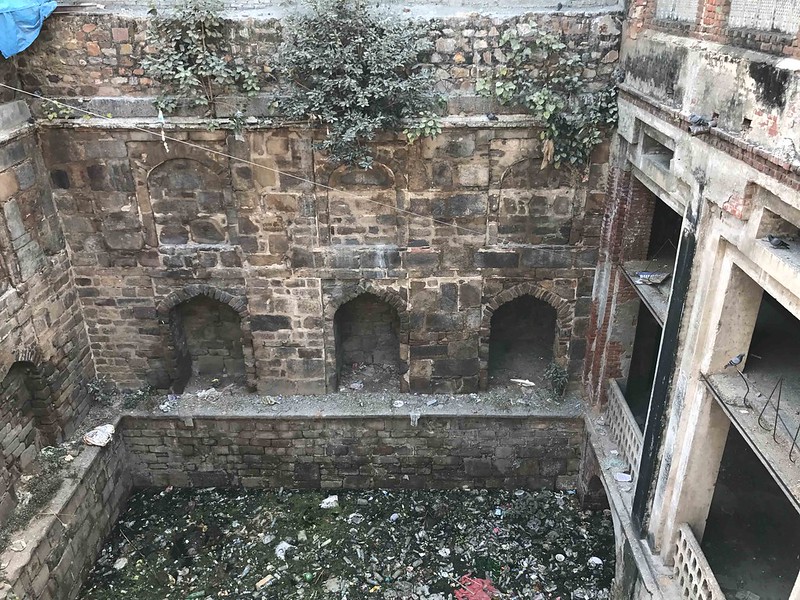 The old step-well within the Sufi shrine of Khwaja Qutubuddin Bakhtiar Kaki is almost impossible to spot. You’ll have to crane your neck over a high wall; even then, all you may be able to see is a dry wasteland of plastic bags. A narrow lane just outside the shrine leads to another access point for the baoli. This offers a better view of the plastic waste. 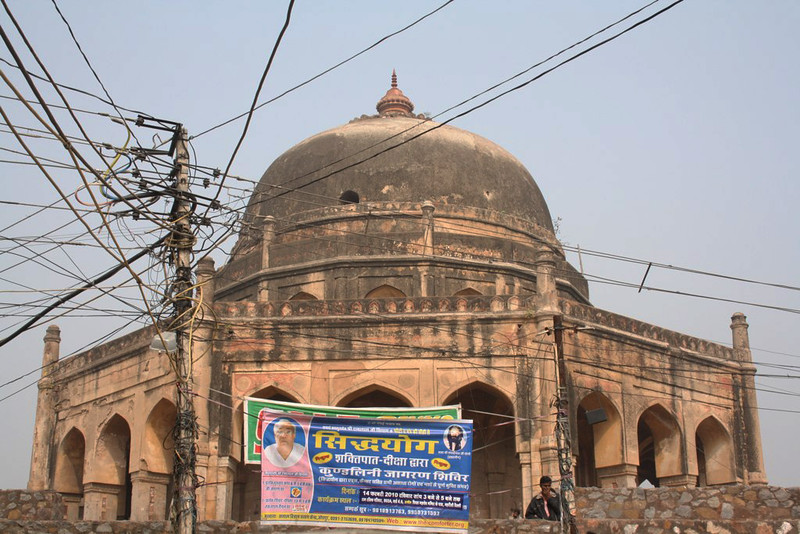 One of Delhi’s few Akbar-era monuments, it is still close to its original state—or so it seems. Some aesthetes might be revolted by the sounds and sights around the monument. The tomb looks down on a square constantly clogged with traffic; a bus stand lies a stone’s throw away. You get a panoramic view of the monument from across the road but the sight of unwieldy power cables comes as part of the package. One side of the monument faces a garbage dump yard. 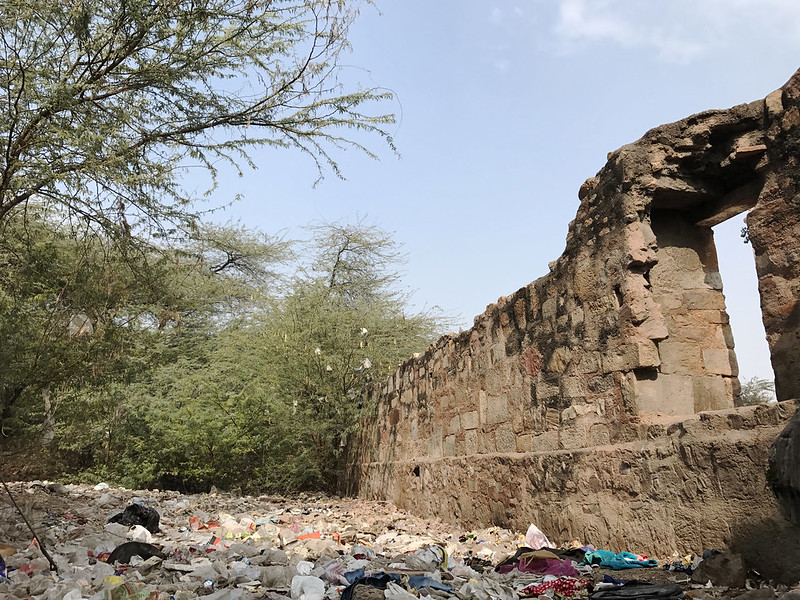 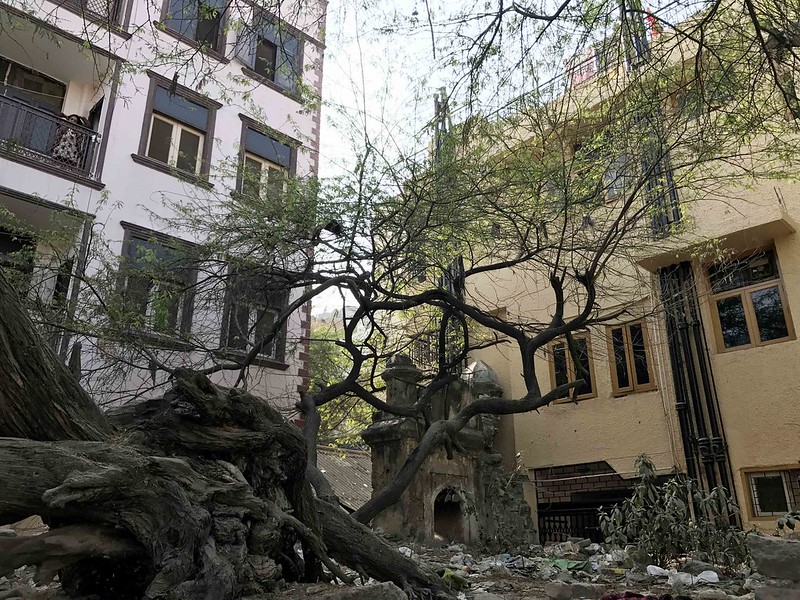 This neglected and broken monument embodies the spirit of present-day Mehrauli. The fragments of a centuries-old structure survive somehow, despite the modern apartment blocks that have come up around it. The monument does not find a mention in the exhaustive Delhi: The Built Heritage. All that is left of it is an arch, a doorway, two small domes and a cracked wall. 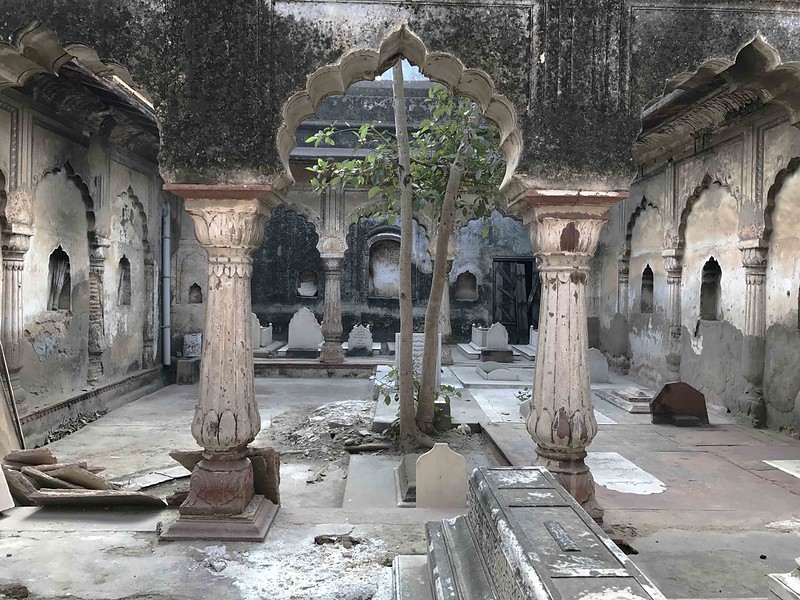 It is one of Delhi’s least-known and most beautiful monuments. Tucked in one corner of Khwaja Qutbuddin Bakhtiyar Kaki’s shrine, this courtyard, which remains locked, is filled with marble graves. The centrepiece is a beautifully sculpted arched column. This was the family graveyard of Begum Abida Ahmed, wife of the late president Fakhruddin Ali Ahmed. Her family had links to Baba Farid, a Sufi saint. The graveyard is no longer in use. 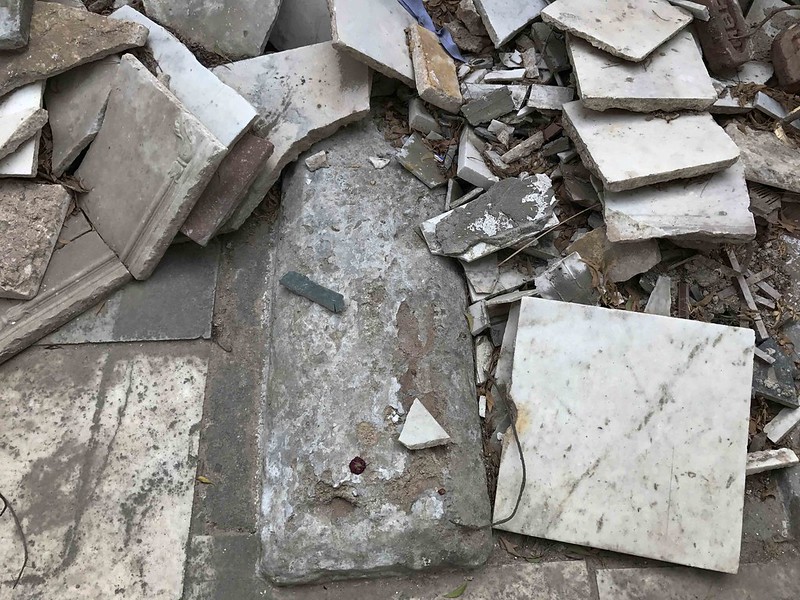 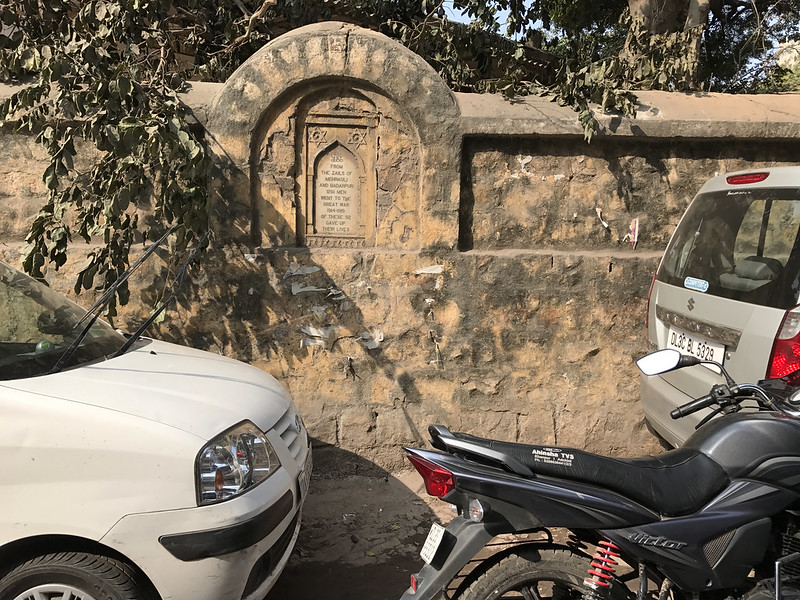 It’s just a yellow wall and you might not even spot it because of the cars parked in front of it. This wall has a small marble slab inscribed with an invocation for more than the thousand nameless men from Mehrauli and Badarpur who fought in World War I. The wall forms the boundary of a government-run healthcare centre, which was originally a Lodhi-era tomb. None of the shopkeepers there could offer any additional insight. 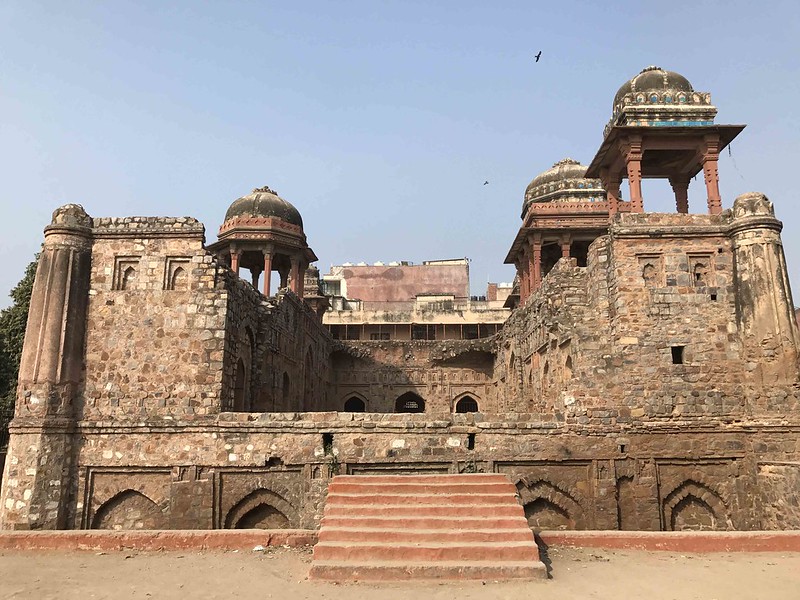 It is one of those monuments in Mehrauli that have not survived in their original state but still looks substantial. The southern wall no longer exists. Most tiles on the doom too have fallen off. Beyond lies a filthy lake. 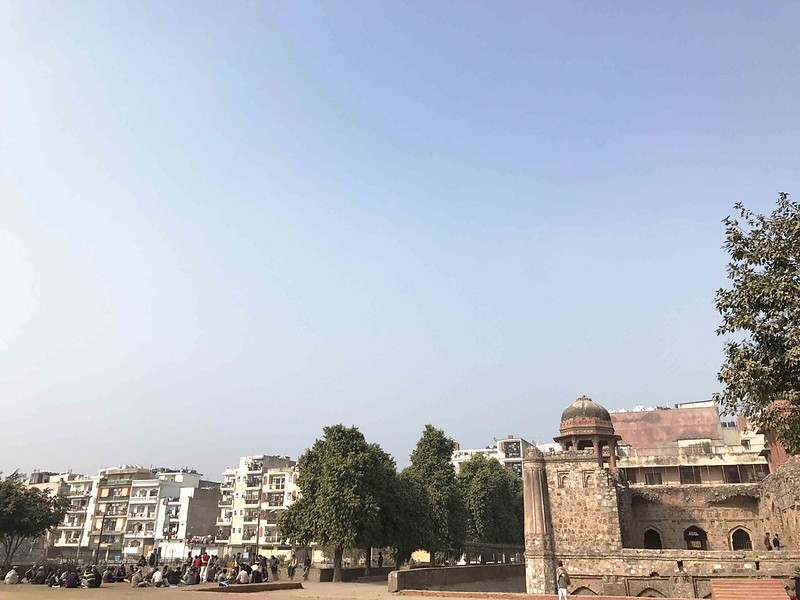 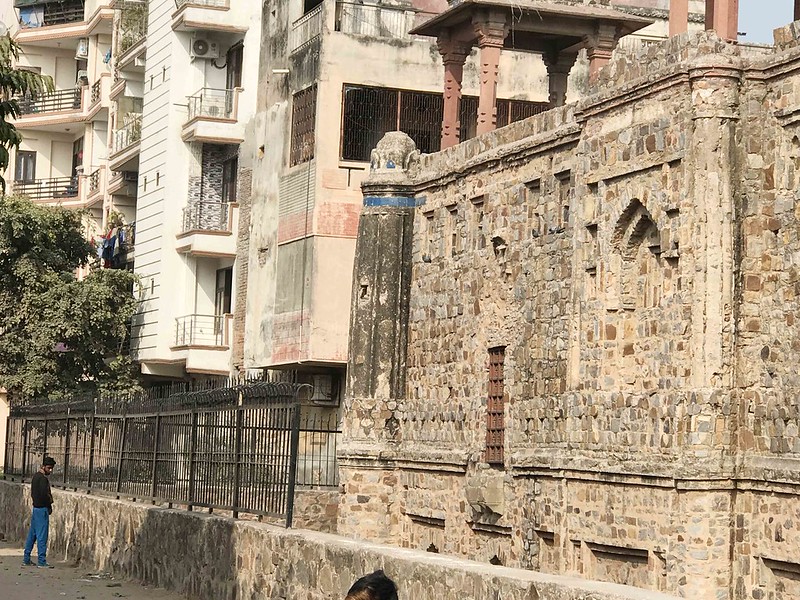 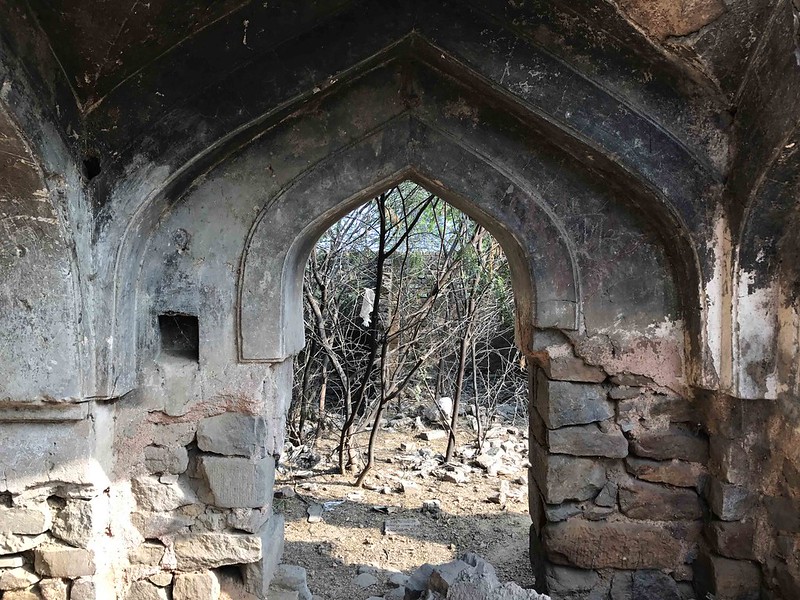 A food vendor stands on the weedy ground in front of these demolished ruins. The cluster of trees is clogged with polythene packets. The ruins themselves stink of urine. Who built them? What were they? Nobody in the area could come up with any response. 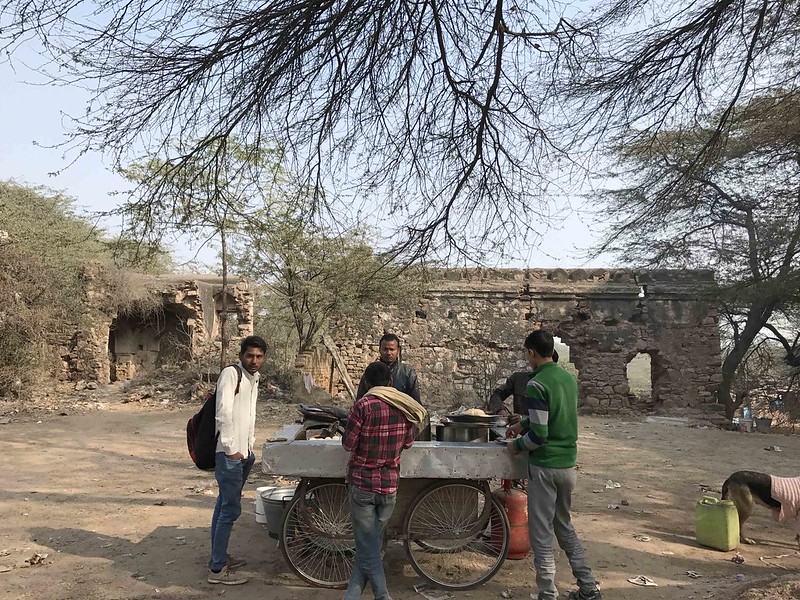 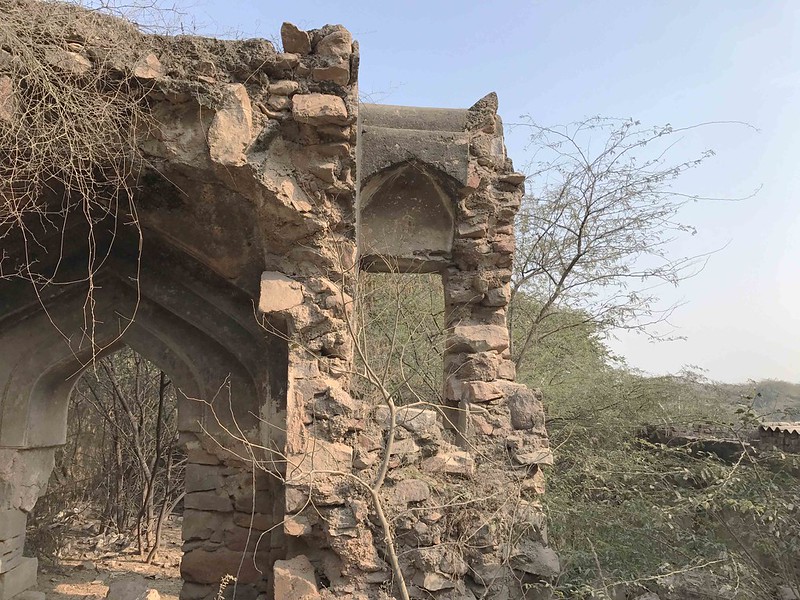 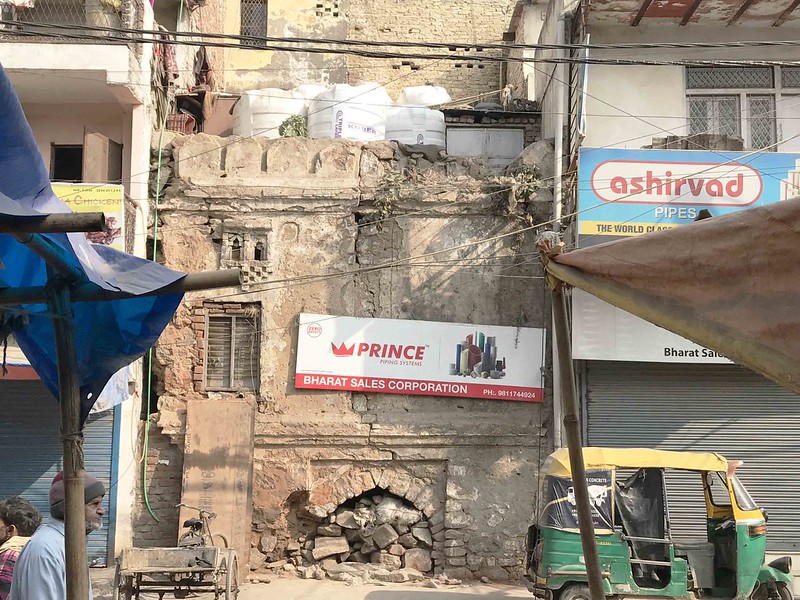