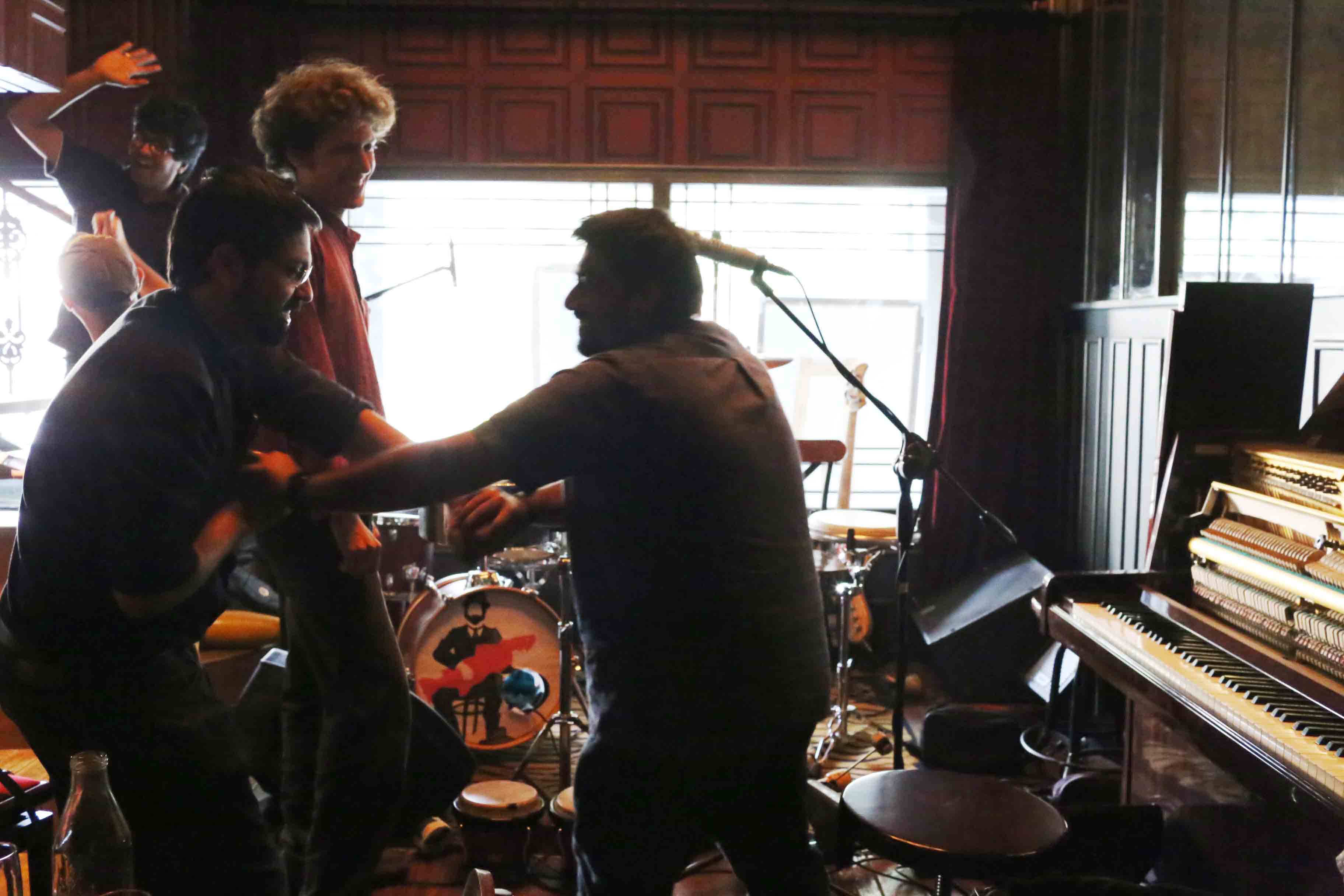 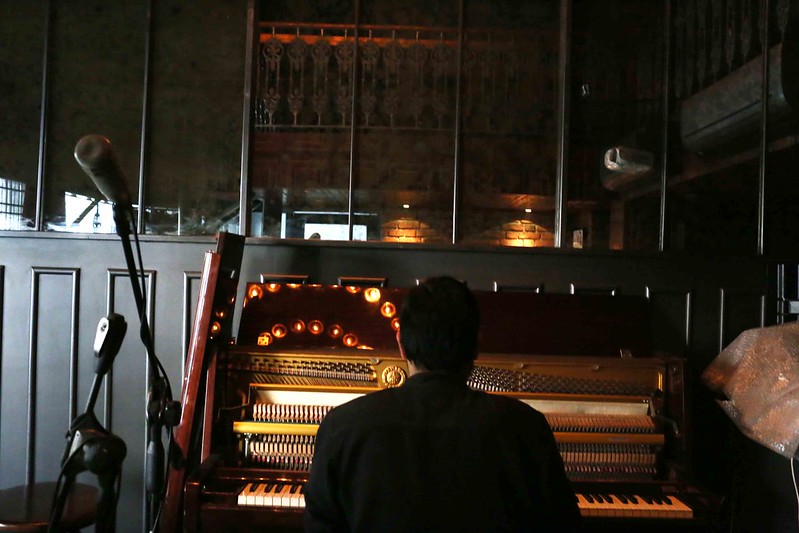 He is a pianist. Tall and slim. His fingers are slender and long; his hair a forest of ringlet curls; his wrists as delicate as a young girl’s; his voice as soothing as the gentlest melancholy. And did I mention the eyes? Deep and blue, they blaze with the intensity of a poet-musician accustomed to playing Frédéric Chopin’s saddest nocturnes.

How can such a sensitive soul survive in this rude city?

Oh well, this is a hypothetical question.

Arjun Sagar Gupta, founder of The Piano Man, the hottest jazz place in town, has all that it takes to bend Delhi to his will. Sometimes, he mesmerizes the club patrons with his nimble fingers on the keyboard, sometimes he ticks them off if they disregard the etiquette of attending a live performance.

It must help that he isn’t the fragile creature of The Delhi Walla‘s imagination, as laid bare above. An encounter with Mr Gupta, an electronics engineering graduate, instantly dispels my romantic notions. His eyes are not so captivating, perhaps because of his paunch—he calls it his “Bania belly”, a reference to his mercantile caste background. His language…well, let’s gingerly step around that (“Can I tickle your balls, Paddy,” I heard him say to a visiting Calcutta pianist). And when he raises his voice, Mr Gupta is as intimidating as the strict “Maths Sir” of my miserable schooldays.

Now the surface has been scratched, we can look deeper. Mr Gupta has a Steinway at home in south Delhi’s Vasant Vihar, and that grand piano is not just a piece of corner furniture to impress guests. Mr Gupta not only plays jazz pianists such as Erroll Garner and Thomas “Fats” Waller, but also classical maestros such as Franz Liszt, Vladimir Horowitz and, of course, Chopin.

At only 31, he has given Delhi arguably its most voguish space to experience live jazz performances—daily from 7pm to midnight. Located in south Delhi’s Safdarjung Enclave market (opposite Deer Park), The Piano Man is now more than a year old; and today, every Who’s Who in the Capital raves about it.

But are you one of those noisy types that infiltrate Delhi bars every night? Such guests—the sort whose non-stop conversation disrupts a live performance—are not welcome in this club. Mr Gupta openly shows his displeasure. His snub has left my friend, a young woman with a penchant for ceaseless chatter, quite traumatized.

“Your friend doesn’t belong to the target group of our music club,” he tells me bluntly, adding that it is absurd that people in this city are so desensitized that they carry on talking in front of the artistes performing for them. “They can go elsewhere,” he says. Once, he told a rowdy group to “go to fucking Hauz Khas Village”, that alleged hipster haven of bars and restaurants, infamous these days for its traffic woes and fire scares.

The Gupta empire is spread across three floors. The music lounge is topped by a bakery and a café. The club itself is dark and quite small, though there is a mezzanine floor stocked with a bar. Inevitably, the crowd often gets as packed as in a Delhi Metro coach, especially during the weekends. Many people come in just for the music, and Mr Gupta has no problems with that. “These are the guys the musicians are playing for… they help create the atmosphere. We only urge them not to occupy the tables, which are our revenue generator.”

The club’s mood generators are the musicians. Delhi has quite a few jazz artistes, and almost all of them have played at The Piano Man in various combinations of solos, duets, quartets, etc. Some of the city’s most notable jazz groups include Artistes Unlimited, Bolly Jazz, Kitchensink, The CopyCats, and Nik & Nat—all of them have performed here. Bands from other cities too do gigs here, if they happen to be in the Capital. Mr Gupta doesn’t have the resources to fly them to Delhi. Some of the finest contemporary jazz pianists in India have headlined the evenings at this club: Aman Mahajan from Bengaluru, Karan Joseph from Mumbai, Delhi’s very own Utsav Lal and Ron Cha (short for Ronojit Chaliha) from Guwahati. Mr Cha received the A.R. Rahman full scholarship to the Berklee College of Music, Boston, in 2016.

Live music with a spot of F&B is easy to find in Delhi. The bars in Paharganj are a world of dim lights, lonely men and female singers crooning old heartbreaking Hindi film songs. The coffee shop at the government-run five-star hotel The Ashok has an elderly musician who seems straight out of the black and white days of Doordarshan TV channel. The Toddy Shop in Hauz Khas Village is loved by literary types—novelist and poet Jeet Thayil has played the guitar there.

But for devotees of jazz, there is no place like The Piano Man, though there have been performances at Depot29 (in the same market) and Depot48 in GK-I N-block market. Mr Gupta must count himself lucky that we’re long past the Delhi of the 1960s and 1970s, when the Capital’s watering holes had a more competitive jazz scene. The charming Kuldip Shenker of Steak House deli in Jor Bagh Market will tell you everything about those days. Mr Shenker, along with two bookseller friends—the late K.D. Singh of The Bookshop and the late Anil Arora of The Bookworm—was considered to be Delhi’s earliest jazz aficionado. One day, when Mr Singh was still alive, he had given me a brief sense of the scene at Connaught Place. Hecke Kingdom Quartet was the most popular band and it performed at Volga, a restaurant that is now a Levi’s showroom. Laguna, another extinct restaurant, was for those wanting to hear Braz Gonsalves’ saxophone. Standard restaurant hosted the trumpeter Frank Dubier.

Now we don’t have so much choice, but we again perhaps have quality.

A special note to all those who cannot stay quiet when a recital is on. Here’s a chance to enjoy an utterly novel experience. Go any evening to The Piano Man. Be sure to be there by 10.45pm, the time for the Silent Song, a tradition here. This is an interlude between the two sets when the stewards are banished and Mr Gupta demands complete silence in the room. “For this round,” he tells me, “we want people to listen to musicians the way they want to be heard.”

This man might fail to transform the city’s audience etiquette but at least he is trying.

[This is the 127th portrait of Mission Delhi project] 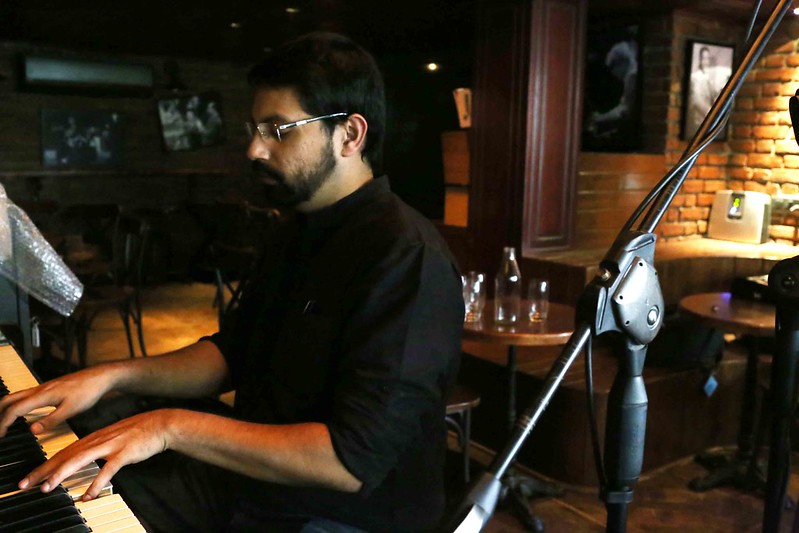 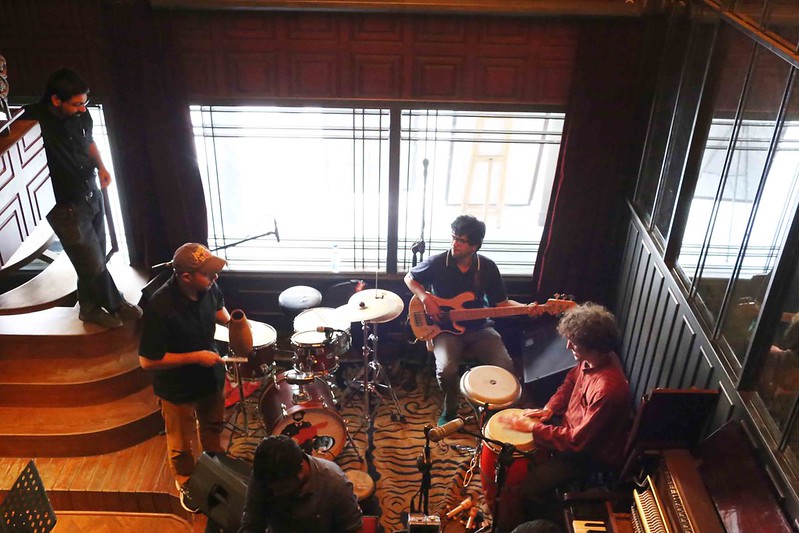 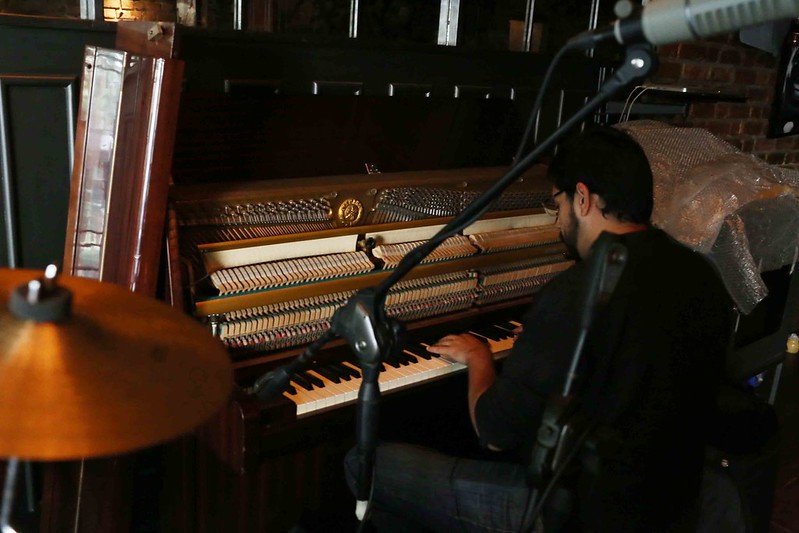 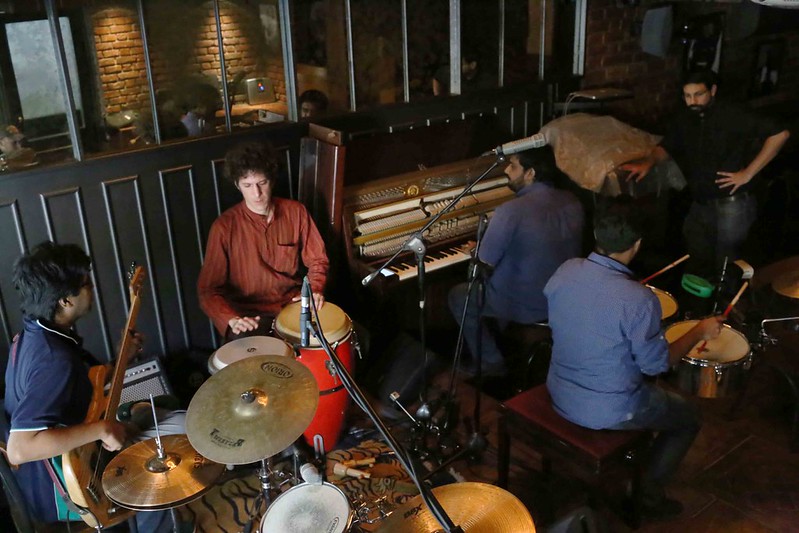 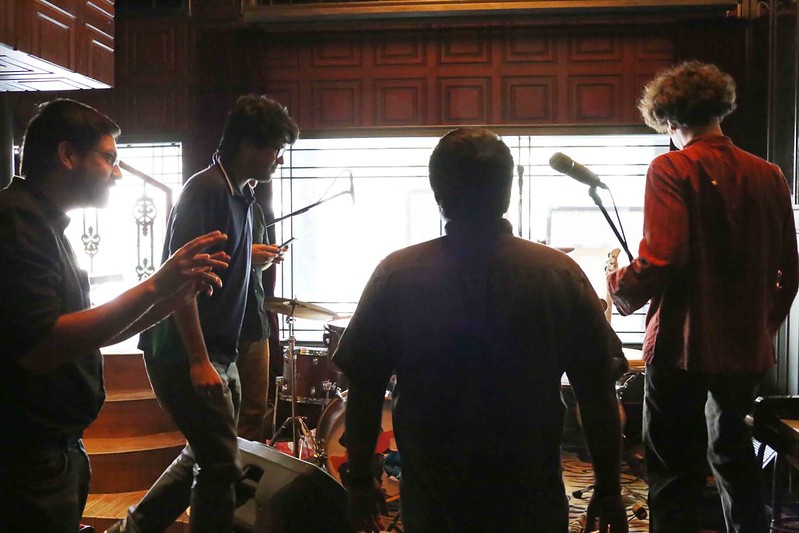 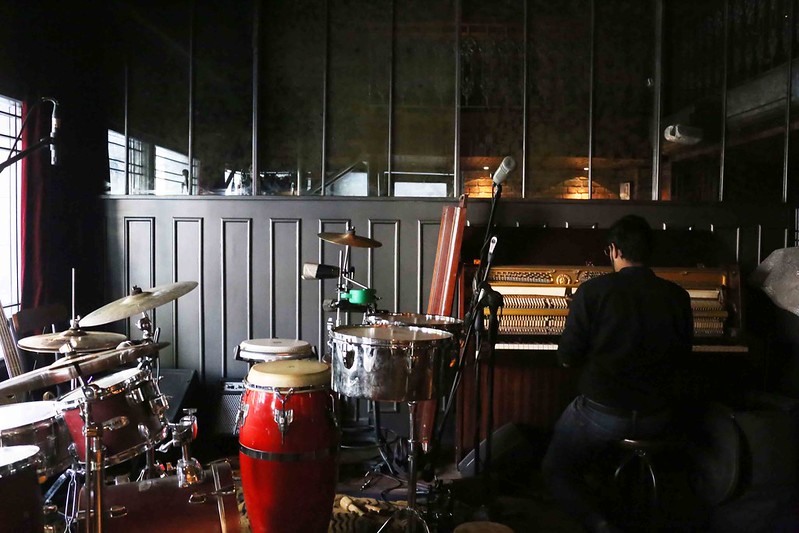 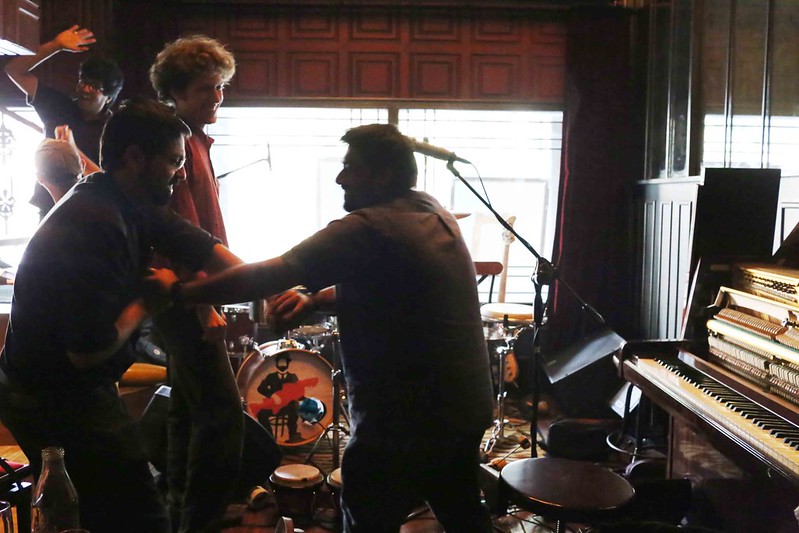