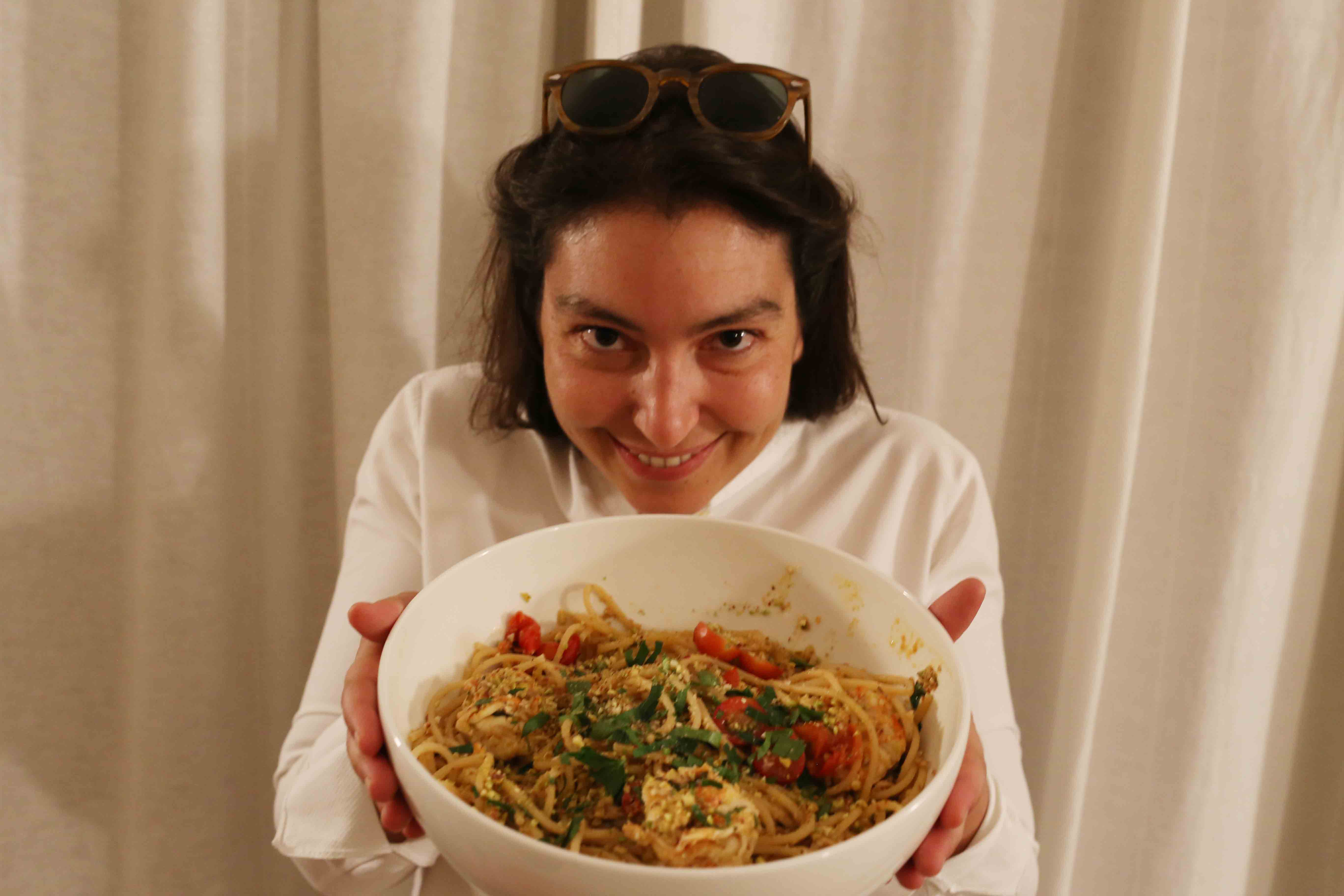 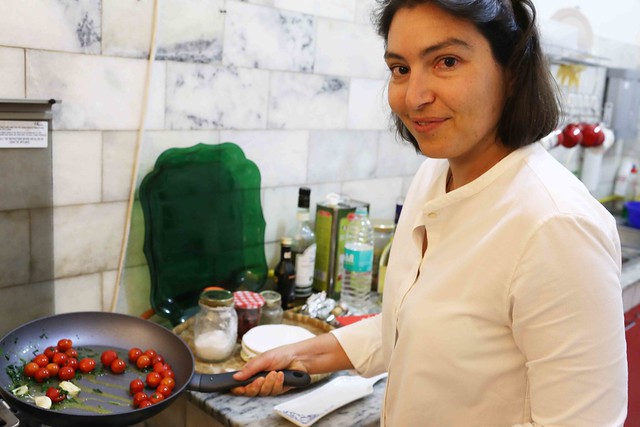 Narrowing her eyes, she says, slowly and carefully, emphasizing each word, “Miscook the pasta and all is spoiled.”

The Delhi Walla is at Elettra Verrone’s kitchen. A First Secretary at the Italian Embassy in New Delhi since 2014, she lives in a handsome books-filled apartment in the central part of the city.

Explaining the intricacies of making pasta, Ms Verrone warns us to never ever trust the accuracy of the cooking minutes specified on the manufacturer’s packet.

Speaking in a grave tone, she says, “Some people, like me, want their pasta a little undercooked, and some others prefer it over-cooked… they are the losers, of course.”

Lounging in Ms Verrone’s home is like an escape from Delhi — I could as well be in Florence, her hometown, the birthplace of the great Michelangelo. “When in Florence you feel upset about something,” says the Delhi-based Florentina, “You simply get out of your house and walk to the City Center where you lift your hat and look up at the blue sky and at the dome of the Santa Maria Novella.”

That’s a famous church, she explains.

What if you continue to feel upset?

“Why! Then you keep walking until you reach Piazza della Signoria where you look at Palazzo Vecchio!”

What if you still continue to be upset, even though this is Florence and one can’t possibly feel low for long in that dream city.

“If you are still feeling sad,” says an amused-looking Ms Verrone, “you go home and cook!”

The 30-something diplomat attributes her affinity for kitchen to her mother, Gianna, and her grandmothers Miriam and Anna — all the ladies live in Florence. The diplomat is now gushing about grandma Anna’s ‘tortellini in brodo’ that is always rustled out back home on Christmas.

After a while, the focus shifts to grandma Miriam’s ribollita. “Ah, it’s a winter bread soup with a secret ingredient that she puts just as her mother and grandmother used to… that secret thing were sweet chestnuts that we would collect in the Mugello woods during the autumn…”

Ms Verrone’s mother often visits her daughter in Delhi and, when here, she never fails to make risotto with porcini, the incredibly flavoursome dried mushrooms she makes sure to bring from Florence.

While Italians will be partial to their cuisine, it goes without saying that Ms Verrone — a diplomat after all — has made earnest efforts to get close to India. It is perhaps in that spirit that she recently learned to make bhindi masala: ”So simple and despite this simplicity still the whole flavour of India in it… you close your eyes and you find yourself under the lovely spell of turmeric, coriander, chilli and cumin seeds…”.

“I’m making it because it has dried fruits, which are very much a part of North Indian cuisine, and also because it has the four most staple ingredients of Italian cuisine and Mediterranean diet — pasta, garlic, olive oil and tomato.”

As she gets going in the kitchen, Ms Verrone again turns grave, saying, “Now the most important thing… when the water in which you will prepare pasta starts to boil, you have to first add salt, Okay! That gives taste to your pasta. For if you miscook the pasta…”

Start boiling water in a deep pot.
In a pan, put 2 spoons of olive oil and crushed garlic (on high fire). As soon as the oil starts making bubbles, add parsley and cherry tomatos (just make a small incision on tomatos), lower the flame and cover for few minutes, pouring the white wine little by little.
As soon as the tomatoes release the juice and seeds and the sauce is watery, thanks to the wine, add the almonds and pistachos and some boiling water of the pasta pot to make the sauce creamy.
In a small separate pan, add the juicy part of orange colour from the head of the prawns and the peeled praws and cook for 30 seconds. Then add the mix to the tomato sauce.
Pasta: boil water… as soon as first bubbles come, add a spoon of salt. As it begins to boil, add vermicelli and after 7-9 minutes start tasting it to ascertain that they are not overcooked. The pasta ought to be is eaten when is still a bit hard, we say “al dente”. 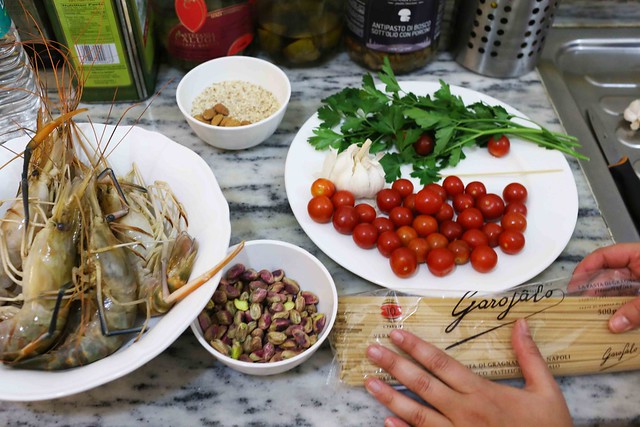 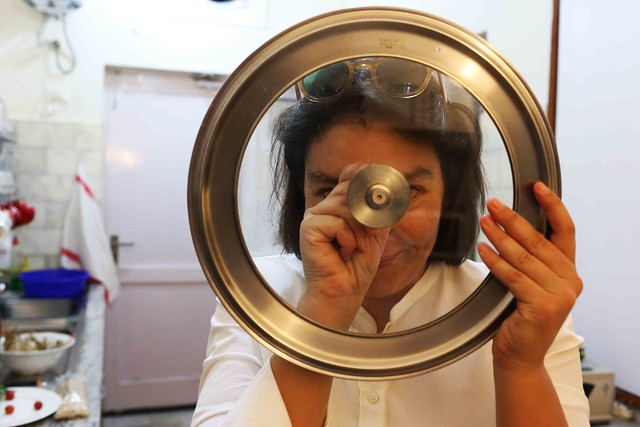 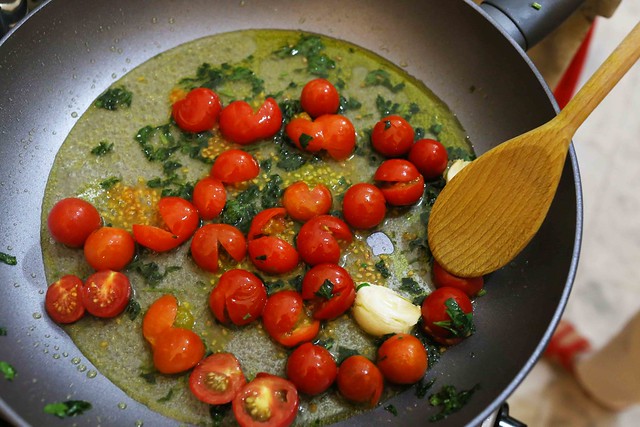 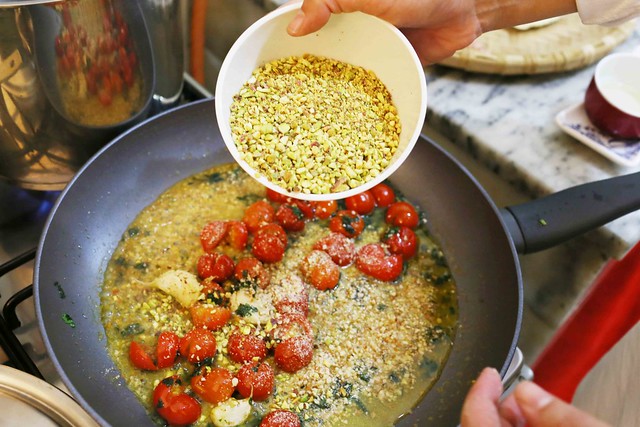 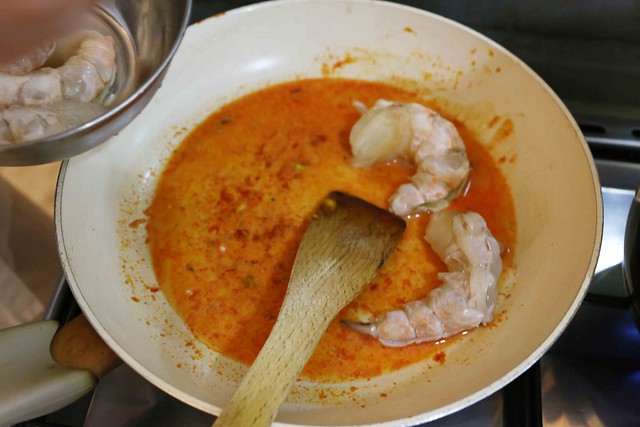 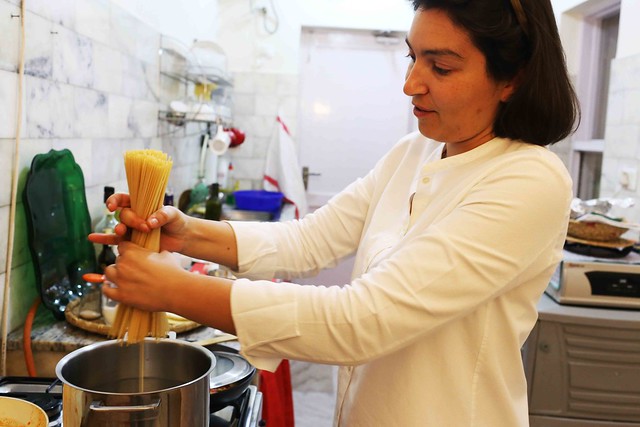 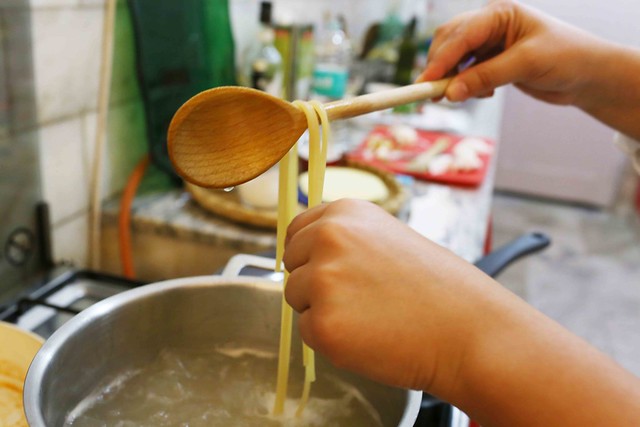 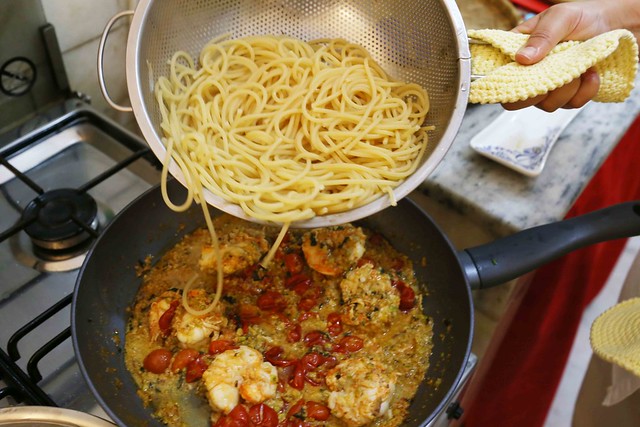 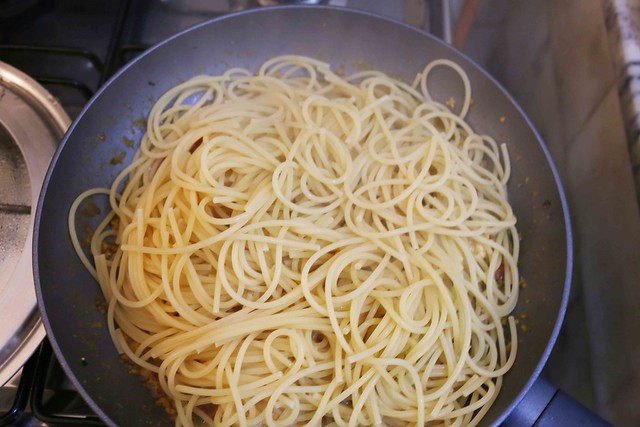 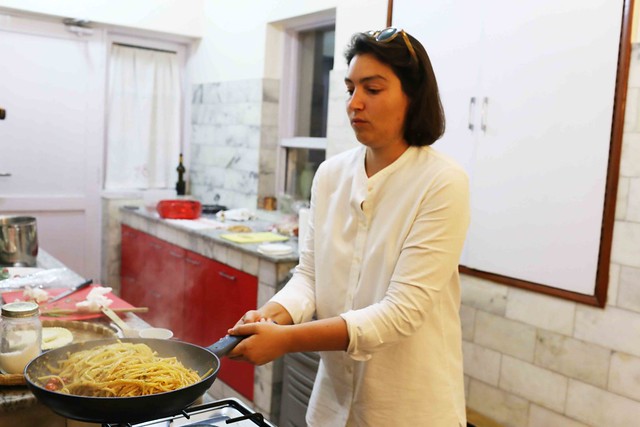 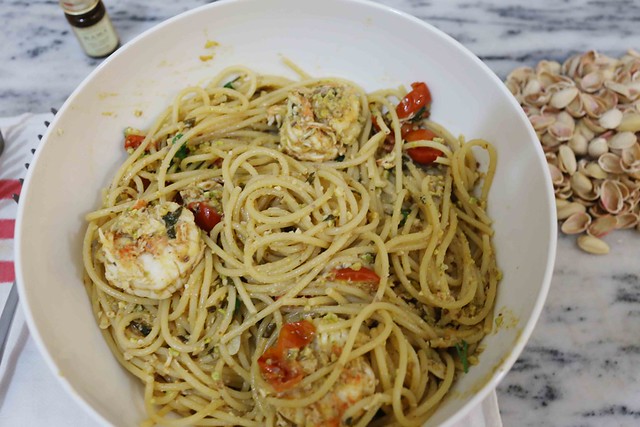 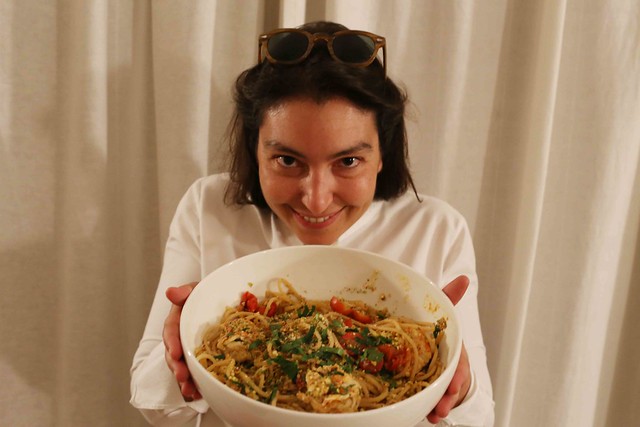 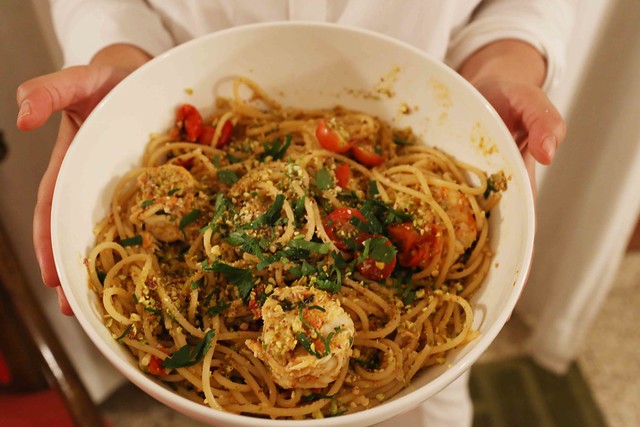 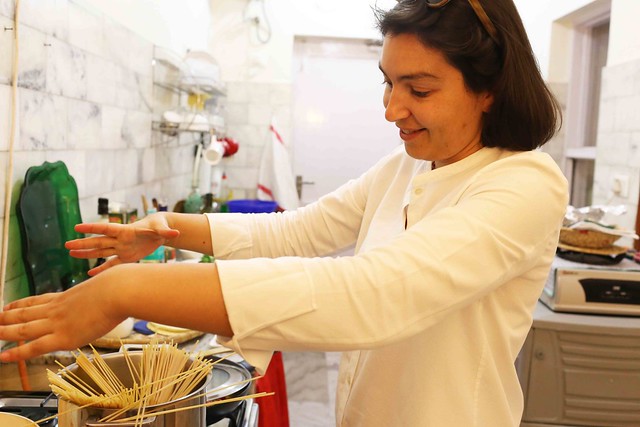