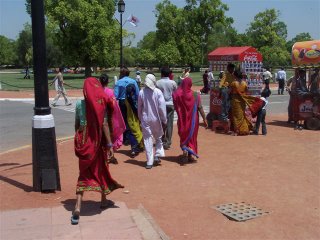 Tourists in the India Gate Maidan

LIKE MANY Europeans, I had several stereotypes in my mind when I arrived in India for the first time. On one hand the sensual and colorful images of a glorious India – elephants, precious stones, orange turbans, hot desert, pink palaces. On the other the hidden face of the mirror – poor, homeless people sleeping on pavements and overcrowded, polluted, hectic cities. I was also interested in the Hinduist vision of life. I had read novels by Indian authors. I had prepared myself for the country.

Yet I knew that there was another India, more modern, more real.

I remember my first contact with India that happened ten years before. It was a monsoon evening in the Indira Gandhi airport. I still have some sensual memories of that dusk. The wet heat strangling my senses, the crowd pressing around me, and a peculiar smell that I can imagine even now and which I have come to identify with India… 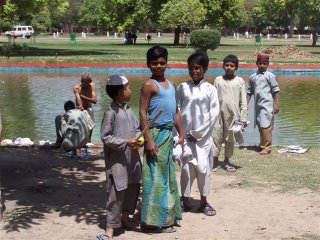 A View of the Lake

During my first Indian trip I stayed in Delhi for two days. Enough time to see only Humayun’s Tomb in a glorious summer sunset, the Qutb Minar in a dusty midday and Jama Masjid by a heavy afternoon. But I did not really have the feeling of encountering India. 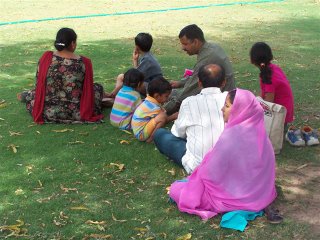 A Family on an India Gate Outing

A few years later I returned to Delhi and stayed there for six weeks as part of my academic work. It was then that I discovered that Delhi was really a city of Djins that another European had described – a complex mosaic of cultures, religions, architectures, with many faces and many arms, like Shiva dancing in the fire. It is difficult to imagine that the white and peaceful villas of New Delhi and the perfumed maze of Chandni Chowk could belong to the same city. 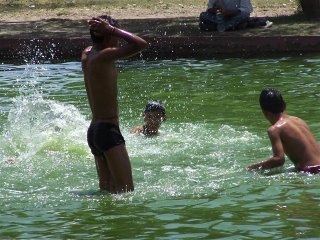 In that trip I had the opportunity to meet many Indians and I still preserve their memories in my heart. The Indian people are probably my most important reason to love India. I have a tender thought for their warm conversation, for their charming way to approve when their eyes and their head seem to float and to wave. Talkative, faithful, the Indians are now my best reason to come back to Delhi again and again. But there are other reasons too. 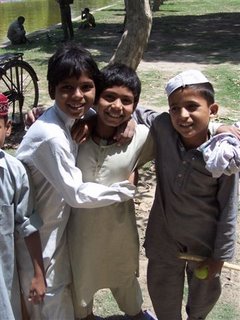 However it must be said that Delhi is not really a beautiful town.

Is there a center in Delhi? Are the circles of Connaught place the heart of the city or the center of hell’s rings? Or is Delhi an octopus with many arms and many hearts? One arm for each of the seven ruined capitals, one heart for each green enclave in the dusty stretch of the city… 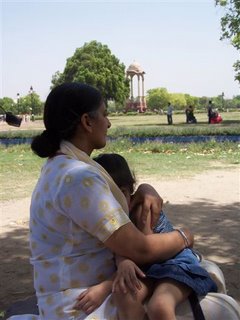 Anyway, now, I think I am familiar with Delhi to an extent that I could make an inventory of what I like about this city : walking in the early night along the inner circle of the Connaught Place, taking an auto-rickshaw to South Extension, lying on the grass of the Lodhi Gardens, enjoying an ice cream in Nirula’s, being in the red belly of Chandni Chowk, coming back to the green avenues of the Delhi University and experiencing the taste of the Masala Tchai or Mango Lassi against my thirsty lips, talking with friends about the contradictions of Indian society…

Of course, my Cartesian mind sometimes rebel against many details – the arrogant and despising way wealthy Indians hail a rickshaw driver, the hours I’m waiting for my friends who are late, for everybody seems to be late in Delhi.

Delhi is not that golden or dusty as I had imagined it to me, and I do not mind that… 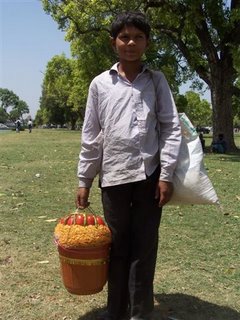 The Channa-Child Makes a Living

I’m teaching French literature and French as a foreign language in an international school in the Netherlands where I am living since almost two years. I’m curious about foreign cultures, colorful or mysterious paintings, and I like smelling books.

I’m 37 years old now, but on one way I’m reluctant to accept that what I was dreaming about when I was a child would not become a reality : I won’t be a writer able to evoke the meanders of human heart or a painter. But I’m lucky to have some friends in beloved parts of the blue planet. And I know that I still have some deep novels to discover, some magnificent places to visit and some wisdom to find.

← Photo Essay: Delhi Shining – The Metropolis Flaunts its Metro
Photo Essay: How does a Delhi Walla Commute in the Times of Terrorism? →