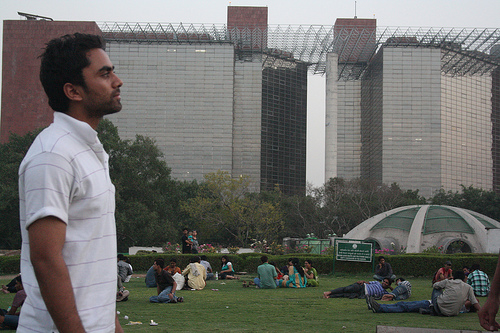 Lying on the grass, he is looking up at the sky. There are no stars to be seen yet. The evening’s gathering darkness, however, is bringing the surrounding skyscrapers into closer focus. The tall office buildings, lighting up for the night, are suddenly looking accessible. Nitin Chanana, 23, is searching for a job. The Delhi Walla met him on the park above Palika Bazaar in Connaught Place. He is with a friend.

“Delhiwallas are big-time haramis (bastards),” says Mr Chanana. “They all are after each other’s ass. Everyone is selfish. If you ask anyone for directions, they won’t tell you.”

Mr Chanana is not saying it in rage, but in a matter-of-fact tone. A native of Ferozepur, a town in Punjab, he has been living in the city for two months. He is looking for work, but not finding it. “Last year I finished my engineering in B.Tech from Jalandhar University in Faridkot. But in Delhi they are offering me positions in call centers. I don’t want to work in them.”

Just then the phone rings. “My girlfriend,” Mr Chanana says. “Haan, Dimple. Are we meeting? OK… No, first I will go home, freshen up and then let’s meet. Come to my place… You want me to come? OK… OK… See you then.”

Mr Chanana is living in an apartment with four other men in Pandav Nagar, a neighbourhood near Akshardham Mandir in east Delhi. His girlfriend lives in the same locality. She, too, is from outside Delhi and had bumped into him two weeks ago while looking for an apartment. They exchanged phone numbers. Later, they fixed up a meeting at Mr Chanana’s place, had sex and got the relationship going.

“My hometown Ferozepur is not modern. Before coming to Delhi, I stayed in Chandigarh for few months,” says Mr Chanana. Chandigarh is the administrative capital of Punjab. “There are wide roads and so many pubs and beer bars. Girls are frank and broad-minded. When they dress up for the evening, they don’t care what their families would think about their short clothes. In Chandigrah, people live their individual lives. You earn on your own, you live on your own. It’s not possible in Ferozepur.”

After a short pause, Mr Chanana says, “Delhi is more fast than Chandigarh.”

As of now, Mr Chanana’s father is funding his sojourn in the Capital. “Dad calls me up once a week. He asks me if I’m eating well and things like those. I tell him to send money and that’s that.” Besides his parents, Mr Chanana has two younger sisters in Ferozepur. “I miss mom the most.”

When he was young, Mr Chanana was a famous athlete in his school. His dream was to become a boxer. This evening I can see a little beer belly poking out of his Tee. “It all changed when I left home and went to Faridkot to do my engineering. College life is different. There are so many attractions. You lose focus. Earlier I was a kind of man who would like being alone. I would daily read the newspaper. In the college, I made friends. We would drink beer, watch movies and chase girls. The dream of being a boxer was forgotten. Now I want to be rich. I want to have a job. But you need to know somebody influential.”

Earlier in the day, Mr Chanana and his friend went to a bar in Karol Bagh and ordered tandoori chicken and beer. After finishing the meal, they went out, telling the stewards that they were going for a smoke since cigarette smoking was banned in the bar. They then took an auto and came to Connaught Place, without paying the bill.

“There are ways of making money in Delhi,” Mr Chanana says. “If you have brains, you can do things here.”

[This is the 24th portrait of the Mission Delhi project]

Give me a job, make me rich Making plans with the girlfriend