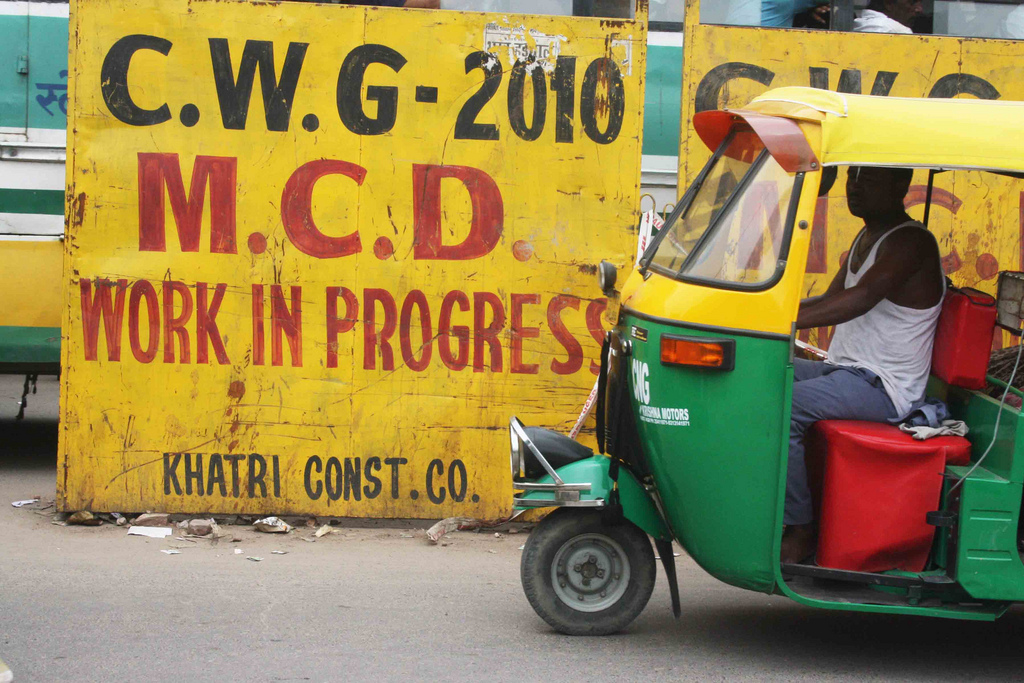 Memo from the North Campus – Are Delhi Commonwealth Games Doomed? Is there any thing that has happened good in the Capital because of the Games? The Delhi Walla asked around. Lyricist Gulzar who was in the city, groped for words before saying, “At least, Delhi is getting to host such a prestigious event. ” Bestselling novelist Chetan Bhagat, a former Delhiite, says, “How to find anything good in the face of so much corruption?” Gurgaon-based author Advaita Kala says, “I don’t believe in the Games’ organisers but I believe in the spirit of Delhiwallas.”

That spirit lies fractured. Waiting for customers in her second floor kotha in GB Road red light district, sex worker Shrimati Vimla says, “The Games have done nothing nice. The streets are dirty. The rainwater is not draining off. Too many mosquitoes.” Author Anuja Chauhan, who grew up in Karol Bagh, says, “The Games have given all of us diverse Delhiites a feeling of oneness. We are united in our outrage against the Rs 28, 000 crore scam that’s been pulled here. At least there is a feeling of pride of breaking the world record in ill-preparedness for a major sporting event.”

A few people, however, are less sarcastic. Madam Kamini, a eunuch in Shahdara, says, “The Games-wallas are eating money but at least they are also doing work. We were wanting flyovers in my area for years but it’s the Games that made that happen.” Banjeet Boro, a BPO executive in Gurgaon, says, “At least the Games are giving Delhi a facelift.” Farid Ahmad Nizami, a lawyer in Nizamuddin Basti, points out the various construction projects. “The dug up roads are an eyesore but you will see the difference after the Games, if not before.”

“At least we have more flyovers and wider roads,” says Ram Lalla, an auto driver. “It wouldn’t have happened if there were no Games.”

The gay rights activist Ashok Row Kavi, a Safdarjang Enclave resident, has a very different take. He says, “The wonderful thing is that lots of escort services and sex workers will be coming to Delhi to cater to the Games’s visitors. At least Delhi will finally know what professionalism is.”

The book industry created its own deadlines for the Commonwealth Games. “Every publishing house is coming out with good, focussed creative works on Delhi,” says Sheema Mookherjee, senior commissioning editor, HarperCollins India. “At least, these books will last longer than the two weeks of Games.”

Some are hopeful that the city will get a boost in tourism. “The Games are making Delhi a top city,” says Satyavrat Mohanty, a cashier in a Hauz Khas Village restaurant. “Players and tourists from all over the world will be coming to Delhi. Our city will get big-time publicity.” This is a sentiment shared by Arman Ali, a 11th standard student in Mother’s International School. He says, “When a foreigner thinks of India, he sees Bollywood, Taj Mahal and snake charmers. The Games, even the bad publicity surrounding it, has put Delhi in spotlight.”

A cynical newspaper-reading Delhiite may find such optimism unrealistic but foreigners are noticing the difference. “I see lots of improvements in the tourist district of Paharganj,” says Jospeh Freeman, a London-based teacher currently visiting Delhi. “The road in the Main Bazaar (Paharganj) have been resurfaced and all the encroaching clothes stalls have been pushed back. Unlike my trip last year, I do not have to haggle with autowallas. Your government has increased the meter fare but at least that saves us from being cheated by drivers who want to make more money.”

Even former union sports minister Mani Shankar Aiyar, the most eloquent voice against the Games, has finally something good to say. “The Commonwealth Games have at least given Delhi an excellent airport (the new T3 terminal),” says Mr Aiyar, “to fly out of once they start.”

Seen on the boundary wall of Delhi School of Buisness