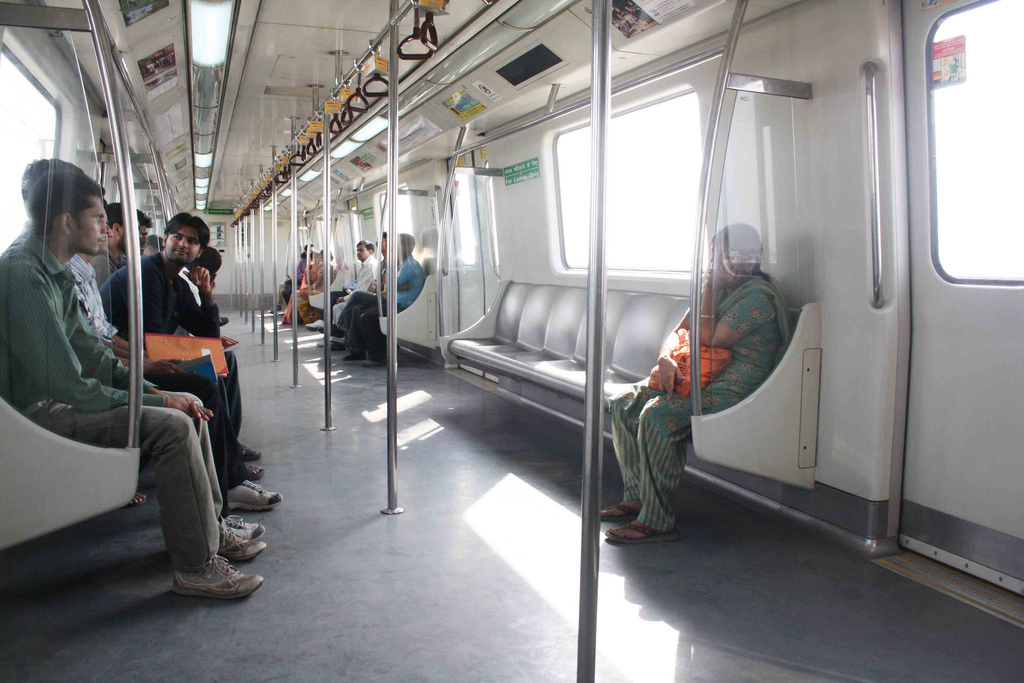 Doors will open on the left.

In 2002, Delhi Metro started its services by connecting East Delhi’s Shahdara to north Delhi’s Tis Hazari. In 2010, it connected Gurgaon and south Delhi to Connaught Place. In between, Anand Vihar was linked to Dwarka, and Rithala to Dilshad Garden. The air-conditioned Metro culture has ushered a new lifestyle into the Capital. The means of commuting is no longer limited to autos, buses, Delhi Transport Corporation (DTC) buses and private vehicles. The Delhi Walla presents the evolving Metro dictionary.

B for Boarding and de-boarding
You get into an auto, step into a bus and board a plane. The Delhi Metro, too, is upscale. No DTC culture here. You board, and you de-board. Like a frequent air traveller.

C for Cardholder
Delhi’s newest blue chip, it has the towering Qutub Minar on its front-side and a credit-card style number on its back. Called the ‘smart card’, it is the DTC pass equivalent of the Metro. The card saves the commuter from waiting in the token queue and gives you a 10 per cent discount. Smart.

J for Jebkatro se saavdhaan
Meaning ‘beware of pickpockets’, the Metro’s public address system also announces, “Pickpockets have been identified.” Then why are they still on the loose?

M for Metro
The Oxford English Mini Dictionary defines ‘metro’ as ‘underground railway’. But in London, it’s called the ‘tube’. In New York City, it’s the ‘subway’. Delhi is like Paris and Madrid. In all the three cities, it’s called metro.

M for Metroites
There are very few people in showy Delhi who can travel to a Page 3 party in a DTC bus and be gutsy enough to say, “I came in the bus.” Autos were always too bourgeoisie and yellow-roofed cabs just managed to cross the line of acceptability. But for the people-like-us crowd, it’s okay to ride in the Metro. Nobody minds being a ‘Metroite’.

M for Mind the gap
Everyone in this class-driven city minds the gap. It’s in our genes. Now, minding the gap has become ‘official’, thanks to the Metro. Here, however, the gap is real – the dangerous empty space between the coach door and the platform.

P for Pillar no.
It’s no longer just the margs, streets and buildings. The addresses in localities where the Metro goes over the ground now has an easier-to-find identity. Eg: “40 Raja Garden, 1st floor, Metro pillar no. 372.” Or “Come for our daughter’s roka. Just follow the Metro, and turn left at pillar no. 125. The hotel is right opposite.”

R for Rajiv Chowk
This is what unites the son of Queen Victoria with the son of Prime Minister Indira Gandhi. Connaught Place, circa 1930s, was named after the Duke of Connaught, who was Prince Arthur, Victoria’s third son. In the nineties, this premier shopping district was renamed after the assassinated Prime Minister Rajiv Gandhi. Stubborn Delhiites would still call the place by the old slang, CP. In 2006, the Metro came, and the Rajiv Chowk terminus below Central Park took a life of its own. While CP tries to hold on to CP, it’s Rajiv Chowk that conjures up images of a sea of muggles rising up the escalators, going down the stairs, getting off the Metro and dating at Café Coffee Day.

T for token
Soon, there will be no tickets left. It’s the age of the token, a piece of stamped plastic. These reusable discs are fast replacing Delhi’s ticket civilisation, which may soon be gone with the blue line buses.

V for Vishwavidyalya
If there were no Metro stop by this name in the North Campus of Delhi University, this tongue-twisting Hindi word, meaning ‘university’, would have never entered the lexicon of English Honour Stephanians.

Y for Yellow Line
In the beginning, there was blue line for private buses and white line for chartered buses. The Metro completed the rainbow with its yellow line, red line, violet line and yes… it will never leave us, the blue line (on the Dwarka route).

P for Pickpockets have been identified