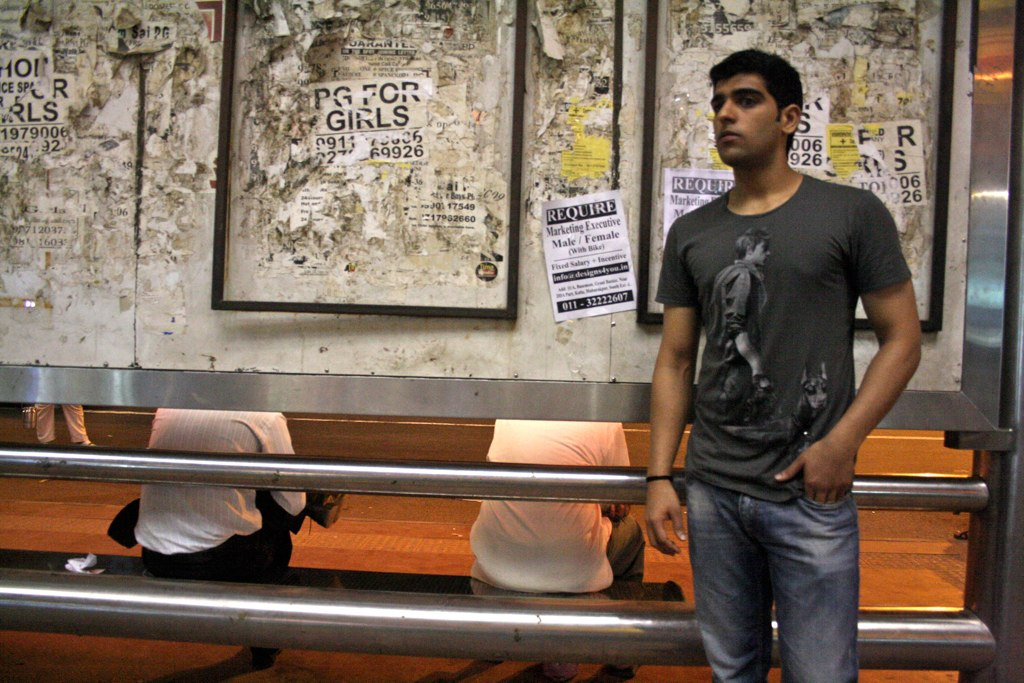 Sitting beside the commuters, he suddenly gets up, sits down again and says, “I want to stand out among the normal people. I want to be famous.” The Delhi Walla met Ankit Verma, 20, at a bus stop one night in South Extension-I, a market famous for expensive showrooms.

With his gelled hair, fit body and dimpled smile, Mr Verma looks more groomed than the ‘normal people’ around him. He lives in the neighbourhood and is out for a night time walk, resting for a few minutes at the bus stop. It is 10 pm and shops have started shutting down. Over the din of the Ring Road traffic, he says, “First, I want to be a model, and then, I want to get into movies.”

A final year graduate student in Saket’s Bhagat Singh College, Mr Verma, till 2009, wanted to enter administrative services. When a college friend praised his “good smile”, his ambitions shifted. “I’m five feet, 11 inches; it’s the minimum height required to become a model.” The family – parents, a brother and a sister – was supportive. “My parents warned that luck plays an important role in this field and that there is a lot of struggle. They suggested that I focus on my studies and take up modeling as time-pass.”

Mr Verma’s father, a building contractor, gave him Rs 25,000 to get a portfolio done at a photography studio in Malviya Nagar. The young man posed in a white Tee and blue jeans at a session inside the studio; for an outdoor shoot, he was dressed formally in a suit. No shirtless photo was taken. “I was bulky then.”

The body had to be built. Everyday, after attending classes, Mr Verma worked out for two hours at the Fat-to-Fit gym in East of Kailash. “First, the cardios (treadmill, crosstrainer), then abs (crunches, leg raises) and finally the weight training.” For lunch, he had roast or boiled chicken at Shahi Kitchen restaurant, which is near the gym. In the evening, he had his “supper meal” of protein shake, two brown bread and two egg whites.

The next step was to get assignments. But, Mr Verma had no contacts in the modeling world. Walking past the closed South Extension showrooms, he says how one day he went to a newspaper’s office where he was pointlessly directed to so many floors that he returned home disappointed. A few weeks later he sent his portfolio to a modeling agency that helped him grab a commercial for a mobile phone company. The ad was shot in September in Jaipur’s international airport. Mr Verma played a security officer. “It’s a minute long and I’ll appear for a second or so.” The model’s first earning was Rs 2,000 that he spent with friends in a sheesha bar in East of Kailash.

Soon afterwards, Mr Verma got a role in a TV comedy called Kya Haal Hai Jeejaji. “I auditioned for it at a flat in Sagar Apartment, Connaught Place.” Some of the shooting took place at a farmhouse in Chhatarpur. “I’m a boy called Ravi. It’s not the lead and I haven’t been explained his profile, but the character is emerging line by line.”

Outside a closed fruit bhelpuri stall, Mr Verma says that he intends to join a theatre group. “I don’t have a role model, but one person who I look to is (actor) John Abraham. He was a model till 1999 and then he became a successful filmstar.”

As we walk back to the bus stop, I ask, “Do you really think you can be as famous as John Abraham?”

“I believe in hard work and patience.”

“What if things do not work out?”

“I’ll take my father’s business as the last option.”

[This is the 32nd portrait of the Mission Delhi project]

I have a dream At the bus stop Hero of the world I want to be famous