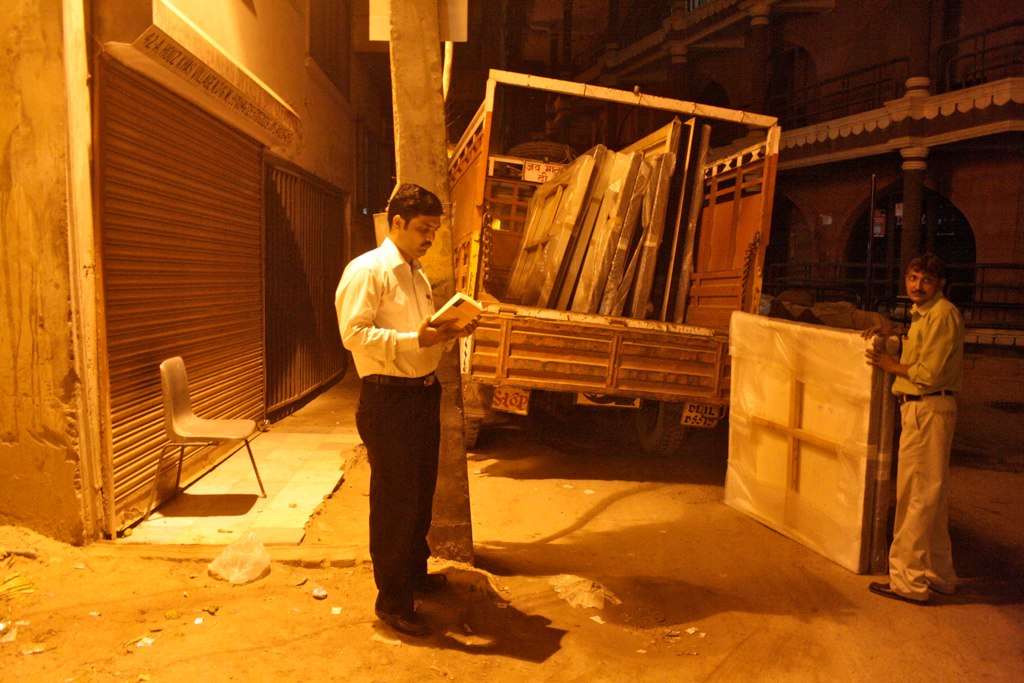 Approaching the table where two new guests have seated, he looks curiously at the book one of them has placed beside the flower vase. It is the paperback edition of Sam Miller’s Delhi: Adventures in a Megacity. While presenting them the menu, he asks if he can borrow the book for a minute. They oblige.

The Delhi Walla met Raghavendra Vanjre, 31, in Naivedyam, a south Indian specialty restaurant in south Delhi’s Hauz Khas Village. A staff captain, he is fond of reading. In the restaurant, he has established bonds with regular guests, who are fellow book lovers. If they happen to be dining alone, Mr Vanjre spends a few moments, discussing with them the issues of the day: Khushwant Singh’s latest Sunday column, Arundhati Roy’s new essay on Kashmir, Chetan Bhagat’s fourth novel, and if the guest insists — the curries in the Maharaja thali.

It is 11 pm and the duty hours have just ended. We are walking towards Mr Vanjre’s one-room apartment in the village. He is carrying Jason Burke’s On the Road to Kandahar. “I don’t get Kannada books in Delhi,” he tells me. Kannada is the language of his home state, Karnataka. A stocky man, Mr Vanjre hails from the city of Davangere. He arrived in Delhi a year ago, in November 2009. His two beloved authors write in Kannada and are largely unknown in Hindi-speaking Delhi: columnist Ravi Belagere and film director Nagathihalli Chandrashekar. “Belagere’s non-fiction deals with what an individual can give to the society. Chandrashekar, besides working in films, is a short story writer. His tales tell you how man is changing with times.”

When settling in Delhi, Mr Vanjre decided not to buy a television. “That would have distracted me from my reading.” His neighbours are fellow employees from the restaurant. Most are single like him, and almost all are from south India. “Their thinking is different. They like watching TV. But I don’t miss the bookish conversations I would have with my friends back home. I keep myself busy in my own world.”

For intellectual simulation, the captain depends on his younger brother, Ramakrishna, who is pursuing business studies in Bangalore, Karnataka’s capital. “Currently, we are fighting over Arundhati Roy.” The Booker prize-winning author has written essays on nuclear bombs, big dams, adivasi struggles and Kashmir’s separatist movement. “My brother says that her statements on Kashmir are anti-national. I think that somebody has to talk about the injustices there.” Roy is a regular to Naivedyam’s Hauz Khas outlet. “She is very polite and always asks how I am doing. But she comes with friends. I’m hesitant to talk to her.”

Mr Vanjre has no close friend in Delhi. On his days off, he sets about exploring the city, alone. “I like Akshardham temple, especially the slogans about vegetarianism that the temple authorities have put up at different places. There is also a slogan by George Bernard Shaw.”

One evening, Mr Vanjre had taken the Metro to Chandni Chowk station, from where he walked to the Red Fort. But the monument had closed for the day. So, he settled for a biryani from a street stall.

Mr Vanjre doesn’t frequent Delhi’s bookstores. “They sell only English novels.” He does, however, enjoy reading best sellers by Indian English authors: Chetan Bhagat and Khushwant Singh. “When you start reading any of Bhagat’s novels, you don’t wish to do anything else until you finish. His language is so easy and his plots are engaging. While with Khushwant Singh, you get the point in the first line itself.”

Recently, Mr Vanjre finished reading two famous works of the Colombian-born author Gabriel García Márquez. He bought the books from a footpath a year ago in Bombay. “I liked the ending of Love in the Time of Cholera, when the two lovers unite after so many years. In One Hundred Years of Solitude, the description of the jungle was very vivid. It was like watching a movie.”

Despite his passion for books, Mr Vanjre hasn’t let them overtake the burning ambition of his life. “Some day, I want to open my own fruit juice stall.”

[This is the 33rd portrait of the Mission Delhi project]

The portrait of a reader