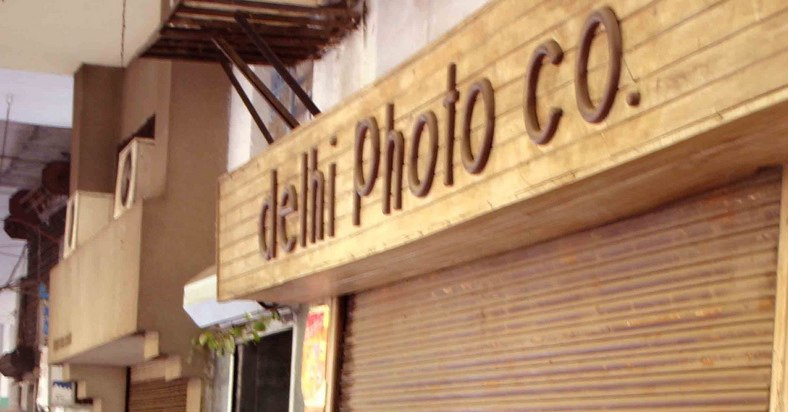 The other afternoon The Delhi Walla was walking in Janpath, Connaught Place. Reaching in front of an old landmark, I stood with amazement and then I laughed. What used to be Delhi Photo Company was now a restaurant specializing in Mediterranean cuisine. Fresc Co opened on September 22 2010.

In February 2009, I had stepped into Delhi Photo Company to chat with its owner and walk around its back area. I was happy that in this age of digicams, the photo studio was still surviving. The owner’s son was full of plans. He showed me the art gallery that he was building inside the studio to encourage young photographers. He pointed to the tables he had bought for an in-house café, which was “opening soon”. Two years later Delhi Photo Company as a Janpath landmark lies dead. Here is the piece I had written on it:

A photography studio that has survived the modern times.

A 70-year-old shop is expected to wallow in its past. Yesterday must always be richer than today and tomorrow should be forever uncertain. If it’s a photo studio, the tragedy has to be weepier. After all, who needs to go to photo studios now?

Everyone with a digicam is a wannabe photographer (like The Delhi Walla!). Isn’t that’s why Connaught Place is crowded with lost landmarks? (Rangoon Studio in Janpath, Shimla Studio in the Regal building…)

Delhi Photo Company should be no different. Here’s its stereotypical story: first Indian-owned shop in Janpath opens in 1937; specializes in portrait photography; the founder dies 27 years later; the son, the Germany-returned photography graduate, takes over; the grandson is now in-charge.

What should happen next?

Not many patrons. Photo processing machines rusting to decay. The new generation in the family has other distractions.

So how it must end?

Shut off the dark room lights and roll down the shutters.

Well, a few tales can have different plots.

In old times, Delhi Photo Company clicked portraits of Maharajas and Nawabs. It was the first official photographer of the President of India, as well as of Tribhuwan Shah, the King of Nepal. Alas, times change and today people prefer passport size pictures than 16″*20″ portraits. No problem. The shop does that and more.

It exports t-shirts printed with tacky pictures and tackier slogans (sample: Taj Mahal – the biggest erection man raised for a woman). It also sells Yoga DVDs and classical music albums. Curiously, Maharishi Mahesh Yogi’s official website is managed by them. In fact, most of Maharishi’s pictures you might have come across have been shot by Delhi Photo Company. Lest we forget, it also prints your digicam pictures.

But old ways have not been sent to old-age homes. “We still do processing of black and photographs manually”, says Ajay Shanker, the founder’s grandson.

A professional photographer who also shoots publicity stills for Bollywood films, Mr Shanker is an able inheritor of the family’s property. Rupa Esther Sharma, a studio patron, wrote to me, saying:
“I went to this studio in 1994 as I needed an urgent PP size photo for an application. I can still recall how the photographer took one minute to explain to me how a tilt of my head would give a better picture and how a straightening of my back would effect the result.  Since then and many PP pictures later I have not come across such an efficient photographer. Every time I go to Janpath, which is about once a year as I live in Noida, I make it a point to check the place for its colorful picture postcards – oh they are keepsakes, they catch our lives so aesthetically – Tees, key rings, caps etc.”

Mr Shanker has interesting plans ahead. He is all set to open an art gallery and café in the studio. “This space will be for aspiring photographers and artists with real talent in them”, he says while walking me round the beautifully lit soundproof gallery. Delhi Photo Company will live on.

Mr Shanker, where are you? In search of the lost landmark? ← Memo from Nizamuddin Dargah – Meeting the Other Sex
Photo Essay – Are Newspapers Dead? →