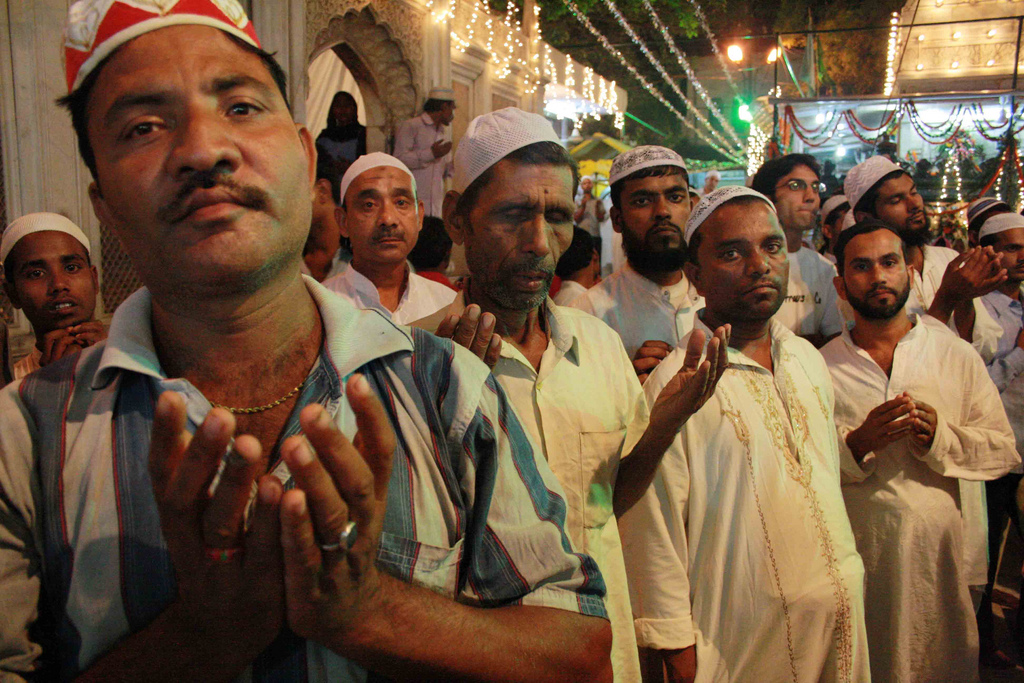 You didn’t need to tell Hazrat Nizamuddin what had brought you to his door — the desire for a son, a cure, or mental peace. He would know it just by a glance at your face, and then in soothing words bless that your wish be granted. 700 years after his death, his shrine is still thronged with blessing seekers. On Thursday evenings, the day of the Sufis, the place is so packed that there is not even space to drop a kerchief — lights and lamps lit, incense burning, ecstatic qawwals singing in love and praise of the saint, hundreds unburdening their hearts.

I have lived in Delhi all my life, that’s thirty-one long years, but it was only in 2010 that I visited the dargah of Hazrat Nizamuddin Auliya for the first time. Of course I had known of the shrine’s existence, and the saint’s following, but petty inhibitions kept me away: How does one exactly get to the shrine? Once there, how does one pray? Are women allowed entrance? As they say, you cannot pray to God unless he himself wills you to.

Hazrat Nizamuddin is the greatest of Indian Sufi saints. Sufism represents the mystical side of Islam. Hazrat Nizamuddin believed and preached that God could be attained only through love and he could be loved only through love and service to humanity. It is only natural then that he is also called by the name Mehboob-e-illahi, beloved of the God.

At the age of seventeen, he became a disciple of Sufi saint Fariduddin Ganj-i-Shakkar also known as Baba Farid. Just three years later he was announced the successor to Baba Farid and the caliph of the Chisti Order. This was year 1258.

After living in several places in Delhi, he finally established his khanqah, spiritual monastery, in Ghiyaspur area, now known as Nizamuddin after him. It was here that he spent the rest of his days in prayer, renunciation and as a spiritual mentor to many.

Thousands became his devotees. It was a motley crowd, rich, poor, young, old, Hindus and Muslims alike. Hazrat Nizamuddin held that there is only one God though we may know him by different names and may take different routes for the ultimate union with him, but so long as this route was based in love, nothing else mattered. The khanqah ran a langar, free kitchen, where thousands of people from all faiths ate everyday. But the saint himself ate little. He said he had trouble swallowing, thinking of the many who slept on empty stomachs.

Hazrat Nizamuddin believed in the power of music and poetry as a way of inspiring and expressing love for God. This often brought him in conflict with the orthodox rulers of the Delhi Sultanate. Further, he refused to pay court to the sultans, stating that matters of religion and state must be kept separate. This rankled with the rulers. A story goes that Hazrat Nizamuddin was in the middle of getting a baoli, water reservoir, made at the khanqah when the sultan, Ghiyasuddin Tughlaq, announced the construction of the Tughlaqabad fort. The sultan ordered all the labourers to work at his construction site and banned other construction work in the city. Because of their love for the saint, the labourers decided to work at the baoli at night. The saint was more popular than the sultan! Jealous, Ghiyasuddin banned the supply of oil to Ghiyaspur. No oil meant lamps couldn’t be lit and no work could be done. “Never mind. We shall light lamps with water,” said the saint to the worried labourers. And that’s what they did. They lit lamps with water and completed the work.

Another time, returning from a train of battle victories, Ghiyasuddin Tughlaq sent forth orders to Hazrat Nizamuddin to leave the city before his arrival. This got the disciples nervous, but the saint remained unperturbed, only saying, “Hunooz Dilli Door Ast.” Delhi is still far. Indeed, just as he had prophesied, Ghiyasuddin never did reach Delhi! The timbered pavilion where the sultan had camped just outside the city collapsed, burying him underneath. The prophecy was yet another proof of the saint’s exceptional powers.

Hazrat Nizamuddin saw thirteen sultans wear the crown of Delhi. He passed away at the old age of eighty-seven. His tomb reposes now under a large cupola, in a marbled courtyard. A few feet away are other tombs, where lie Jahan Ara, Mohammad Shah Rangeela and other royalty. To be buried close to a saint is supposed to be a short cut to heaven. On the other side of the courtyard is the tomb of Aamir Khusro, the great poet and musician. He was the saint’s most loved disciple. When Hazrat Nizamuddin passed away, the bereaved Khusro sat by his grave for six months, crying. At the end of the six months he too left this world.

It was still early, on a monsoon morning, as I made my way to the shrine. The winding lane was cramped with small restaurants and shops selling knick-knacks, and flowers and chadors to offer to the saint — the bustle not much different from what one witnesses outside temples.

I stepped through a narrow archway, into the shrine. Suddenly, the city and its clamour fell away.

The air in the marbled courtyard was suffused with something soothing, like love. In the sanctum, like an oasis, the tomb lay covered in green chadors and piled with red petals. I circled the shrine, peering through the lattice grill and murmuring my prayers to Hazrat Nizamuddin. What had my inhibitions been about? I couldn’t remember.

[The author runs the blog All Journeys Lead Inwards]

[Send your Delhi pieces to thedelhiwalla@gmail.com] By Amir Khusro’s side