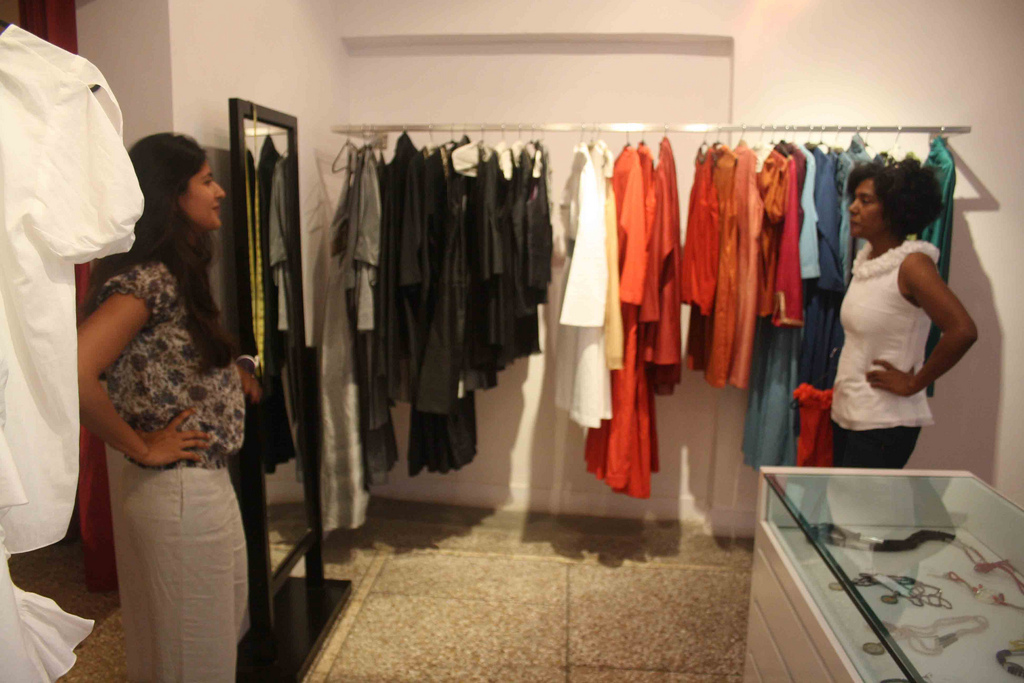 In Shahpur Jat (SPJ) village, south Delhi, the turbaned elders smoke hookahs in street corners while primped mannequins gaze out through glass windows. More than a hundred stores – from those selling high-end designer gear to those hawking imported crap – are clustered on the periphery. The alleys are lined with tailoring sweatshops and hole-in-the-wall vendors selling beads and baubles. Unpainted brick buildings, overhanging wires and rudimentary stores (selling Vjohn shaving cream) sit next to shops with contemporary design that would not look out of place on the London High Street.

Go to Bookwise (125a), if you love books (which could be expensive) or coffee (which is free). Spacious and stylish, the book studio serves walk-ins with coffee and cookies. Another reason to hop here: the coffee table volumes (one is priced at Rs 64,000!). The husband-wife team who run the place are chatty. The bookshop also holds book-reading events. Call them (Ph: 26499568) for schedule. One thing: When The Delhi Walla went there, the place was empty and I worried for its survival. Maybe it was just one of those lighter days.

The local lore pegs Shahpur Jat’s birth 10,000 years ago when a Hindu king set up a fort and a palace there. The Pandavas of Mahabharat took the stones of the fort a couple of miles away to the present-day site of Purana Qila and raised Indraprastha. In 1303, Ala-ud-din Khilji founded the first Muslim city of Delhi, Siri, in Shahpur Jat. Nothing remains of it except parts of its wall, a mosque and a structure called baradari.

The young crowd is regular at Shoe Garage (118-B), one of the village’s oldest stores. It is packed on Saturdays with the student types picking peep toes, pumps, strappy sandals, boots and wedges; all leather and suede; all smart and affordable. The Bags Garage in the same complex have evening clutches in black and maroon, some are beaded with silver embellishments, and some are too Sarojini. The Tan Him store is worth the climb to the building’s first floor for its cartoon-print pillows (Rs 550) and uber-chic bags (Rs 950). Apart from a Slice of Italy outlet, Café Garage (part of the Garage empire, it has tolerable sandwiches) and grubby tea stalls, there is nowhere to eat in Shahpur Jat. The old-timers swore by Pam’s Breakfast but it has shut down. One pencil-thin boutique owner told me that she simply skips lunch.

Shahpur Jat’s modern history began 900 years ago when the Dagar clan from a village called Indri, now in Haryana, settled here. The soil was rich, the Dagars were robust farmers and soon they became wealthy. More clans came and the settlement began to be known as the wealthy colony of the clans, or Shahpur Jat.

Pockmarked with gutters, the Jangi House lane is Shahpur Jat’s high couture street lined with high-end as well as affordable fashion labels. Maya (5-I) deals with wedding trousseaux, customized outfits as well as kurtas and tunics. A lilac-coloured tube dress cost Rs 2,500. At Maximum store (5-J/1), I fell for painted kettles and coloured flower pots called ‘Gifts that grow’. Apart from renting out space to art exhibitions (Rs 5,000 for 10 days), the store also sells maternity wear. Home Linen (5-K/1) has Pakistani cottonsuits (ranging from Rs 1,000), which, I understand, are fast catching up in the city.

To get a Dilli Haat high, dig through odd-and-cute bracelets and pendants at Amaatra (120). Every Twilight reading girl must stop here. Ranging from Rs 50 to Rs 1,500, the gold-plated silver jewellery has traditional Indian designs interpreted in modern styles. Its sister store has funky colourful flip-flops, all made-in-Bangkok fakes of Kappa, Roxy, Havaana and American Eagle.

Installation artist Puneet Kaushik who bought original Kappas from Tokyo rues when told that he could have got the ‘reproduction’ for Rs 550 in the village itself. His store, Alter Ego (87-B), has hand-woven sarees, cute creepy plastic bugs and many other ‘add ons’, including this must buy: thread lampshades done on whiskey bottles; price range, Rs 500.

Earlier, there were no multi-storied houses. Shahpur Jat had farmlands spreading from Hauz Khas and Andrewsganj to Greater Kailash and Malviya Nagar. In 1978, the government acquired the lands on which were raised the posh colonies of Asiad Village, Panchsheel Park and Hauz Khas. Hefty compensations were paid to farmers who became rich overnight. When the village emerged as the centre for basement workshops and its migrant population bloated, the ex-farmers discovered gold in real estate. The land lost forever, they created virtual acres by raising floors on their houses, which they rented to tailoring units. The big fortune came with the arrival of boutiques at the turn of the century.

One trip will not be enough to fully explore Shahpur Jat but I did discover my favourite store: Just Around the Corner, 36. Small but quirky, it has a collection of dizzyingly coloured canvass shoes and a big Bollywood influence. The Bobby Tee has a bikni-clad Dimple Kapadia on it. If you are a Naseeruddin Shah fan, ask for the Ishqiya bracelet, a beaded bangle that the actor wore in the film of that name. I bought a fish-shaped pendant.

The left lane off Nigam Pratibha Vidyapeeth – a primary school for girls – skirts a Siri-era stonewall. It opens into an uneven ground. At the other end lies the plain-looking Tohfa Wali Gumbad. An early 14th-century ruin, it is rarely seen by anyone except some of the fashion boutique kaarigars whose single-window hovels look to it.

Ready to hang out