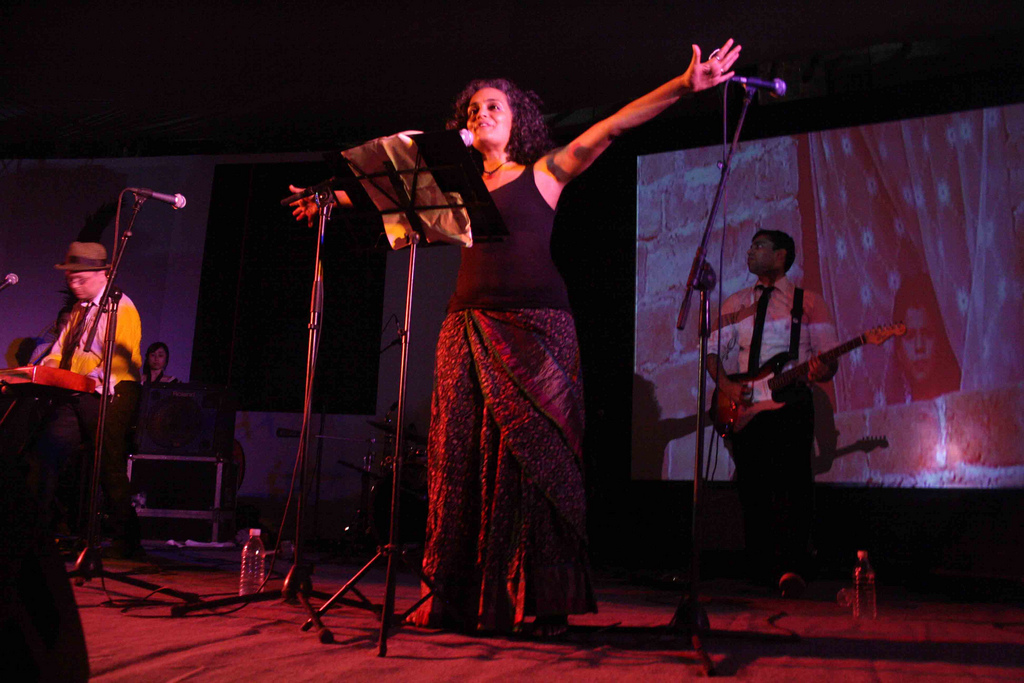 A musical evening with the essayist.

While launching Broken Republic – Three Essays at the India Habitat Center in May 2011, Arundhati Roy read the book’s introduction that touches upon the lives of Delhi’s street children. The recital was accompanied by live music from the band The Ska Vengers. The Delhi Walla brings you images of Ms Roy swaying to the music, and the full text of the introduction.

“THE minister says that for India’s sake people should leave their villages and move to the cities. He’s a Harvard man. He wants speed. And numbers. Five hundred million migrants, he thinks, would make a good business model.

Not everybody likes the idea of their cities filling up with the poor. A judge in Mumbai called slum-dwellers pickpockets of urban land. Another said, while ordering the bulldozing of unauthorised colonies, that people who couldn’t afford it shouldn’t live in cities.

When those who had been evicted went back to where they came from, they found their villages had disappeared under great dams and quarries. Their homes were occupied by hunger, and policemen. The forests were filling up with armed guerrillas. War had migrated too. From the edges of India, in Kashmir, Manipur, Nagaland, to its heart. So the people returned to the crowded city streets and pavements. They crammed into hovels on dusty construction sites, wondering which corner of this huge country was meant for them.

The minister said that migrants to cities were mostly criminals and “carried a kind of behaviour which is unacceptable to modern cities”. The middle class admired him for his forthrightness, for having the courage to call a spade a spade. The minister said he would set up more police stations, recruit more policemen and put more police vehicles on the road to improve law and order.

To make Delhi a world-class city for the 2010 Commonwealth Games, laws were passed that made the poor vanish, like laundry stains. Street vendors disappeared, rickshaw-pullers lost their licences, small shops and businesses were shut down. Beggars were rounded up, tried by mobile magistrates in mobile courts and dropped outside the city limits. The slums that remained were screened off, with vinyl billboards that said DELHIciously Yours.

New kinds of policemen patrolled the streets, better armed, better dressed and trained not to scratch their privates in public, no matter how grave the provocation. There were cameras everywhere, recording everything.

Two young criminals carrying a kind of behaviour which was unacceptable to modern cities escaped the police dragnet, and approached a woman sandwiched between her sunglasses and the leather seats of her shiny car at a traffic crossing. Shamelessly, they demanded money. The woman was rich and kind. The criminals’ heads were no higher than her car window. Their names were Rukmini and Kamli. Or maybe Mehrunissa and Shahbano. (Who cares?) The woman gave them money and some motherly advice. Ten rupees to Kamli (or Shahbano). “Share it,” she told them, and sped away when the lights changed.

Rukmini and Kamli (or Mehrunissa and Shahbano) tore into each other like gladiators, like lifers in a prison yard. Each sleek car that flashed past them, and almost crushed them, carried the reflection of their battle, their fight to the finish, on its shining door.

Eventually, both girls disappeared without a trace, like thousands of children do in Delhi. The Games were a success.

Two months later, on the sixty-second anniversary of India becoming a Republic, the armed forces showcased their new weapons at the Republic Day parade. Russian multi-barrel rocket launchers, combat aircraft, light helicopters and underwater weapons for the navy. The new T-90 battle tank was called Bhishma. (The older one was Arjun.) Varunastra was the name of the latest heavyweight torpedo, and Mareech was a decoy system to seduce incoming torpedoes. (Hanuman and Vajra are the names painted on the armoured vehicles that patrol Kashmir’s frozen streets.) That the names were drawn from Hindu epics was just a coincidence. If India is a Hindu nation, it’s only an accident.

Dare Devils from the Army’s Corps of Signals rode motorcycles in a rocket formation. Then they formed a cluster of flying birds and finally a human pyramid.

Overhead, Sukhoi fighter jets made a trishul, a trident in the sky. Each jet cost more than a billion rupees. Four billion then, for Shiva’s Trident.

The thrilled crowd turned its face up to the weak winter sun and applauded. High in the sky, the winking silver sides of the jets carried the reflection of Rukmini’s and Kamli’s (or Mehrunissa’s and Shahbano’s) fight to the death.

The army band played the national anthem. The President drew the pallu of her sari over her head and took the salute.”