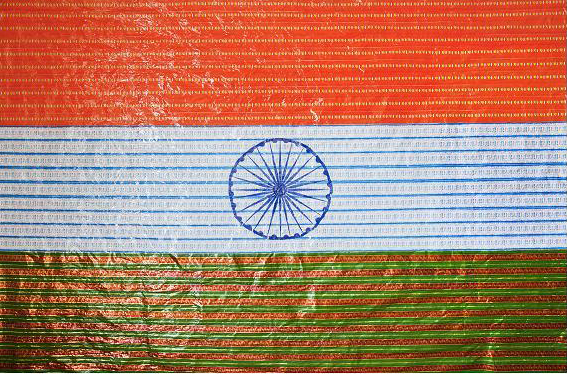 Flags, according to a Delhi-based novelist, are bits of coloured cloth that governments use to first shrink-wrap people’s brains and then as ceremonial shrouds to bury the dead.

In an exhibition at the American Center (2 to 30 July, 2011), flags are bits of coloured plastic that corporations use to first seal-wrap people’s junk food and then as trash to be recycled in countries such as India and China.

Delhi-based American artist Zachary Becker has married Land O’Lake’s butter with Stars and Stripes, and Parle-G biscuits with the tricolour. In his first exhibition, the 23-year-old artist has used discarded packets of branded tobacco, biscuits, tea, burgers, bacon, nuts and popcorn to make 11 flags. All the represented nations in the show are emerging economies, barring one, the US. “The selection reveals the anxieties of Americans,” says Mr Becker, who comes from Davenport, Iowa, and has been living in the Capital for a year. “America is in decline while countries like India, China, Russia and Brazil are players of the new world order.”

Perhaps unintentionally, the branded flags have ended up crystallizing the free market philosophy of The New York Times columnist Thomas Friedman. In his first book on globalization, The Lexus and the Olive Tree, Friedman made a case for mixing militant nationalism with business. “The hidden hand of the market will never work without the hidden fist,” he wrote. “McDonald’s cannot flourish without McDonnell Douglas… the hidden fist that keeps the world safe for Silicon Valley’s technologies to flourish is called the U.S. Army, Air Force, Navy, and Marine Corps.”

In this exhibition, one of the four Indian flags has its saffron strip represented by packages of Pure Gold Mirch Powder, its green strip by Pure Gold Dhaniya Powder and its white strip with Aastha Chai. Since the more combustible combination consists of adding religion, another tricolour has its white strip showing thousands of images of “holy” cows.

It is, of course, one way of looking at things. “You may read my flags as an intersection between consumer identity and national identity,” says Becker, “but as an artist, it’s not my job to proscribe one ideology.”

In 2009, while pursuing a music course in trumpet performance, Mr Becker came across a garage sale in his hometown where pyramids of empty consumer packaging were piled up in a corner. Discarded by corporations because of incorrect nutritional information or some such defect, the packaging was to be shipped to India or China for recycling. Happy to be rid of them, the sales team gave them to Mr Becker free, who did to packages of McEnnedy beef burgers and Oscar Mayer bacon what Andy Warhol did decades ago to Coca-Cola bottles and Campbell’s Soup cans.

He tried placing the brand labels in the cultural setting of his times. In the 1960s, the Coca-Cola, drunk both by actor Elizabeth Taylor and a suburban housewife, represented equality to Warhol. And now? “Every brand image tells a story of executives deciding the most saleable narration that would tempt the consumers to buy their product,” says Mr Becker. “The art of branding resonates with the symbolism of national flags, which entices people to gather under a single tribe.”

In Delhi, Mr Becker buys consumer packaging in Khari Baoli, a wholesale spice bazaar in the Walled City. “America’s plastic trash is shipped to India and China, melted down into consumer goods like McDonald’s Happy Meal toys, and goes back to the US to be bought again, discarded again, shipped again,” he says. In India, the cycle is often interrupted. The packaging is not always melted. Instead, it serves as shelter for the homeless and display sheets for street vendors. Some packaging ends up in places such as Khari Baoli. “After one year of wandering in Delhi, I discovered a street in the old quarter where I found stacks and stacks of packages of my local grocery store in Davenport,” says Mr Becker. That’s the globalization of trash.

The exhibition is on at the American Center, Kastruba Gandhi, from 2-30 July. Come with your I-card. Cameras not allowed. The exhibition will be on at the Ojas Art gallery, Mehrauli, from 5-28 August.