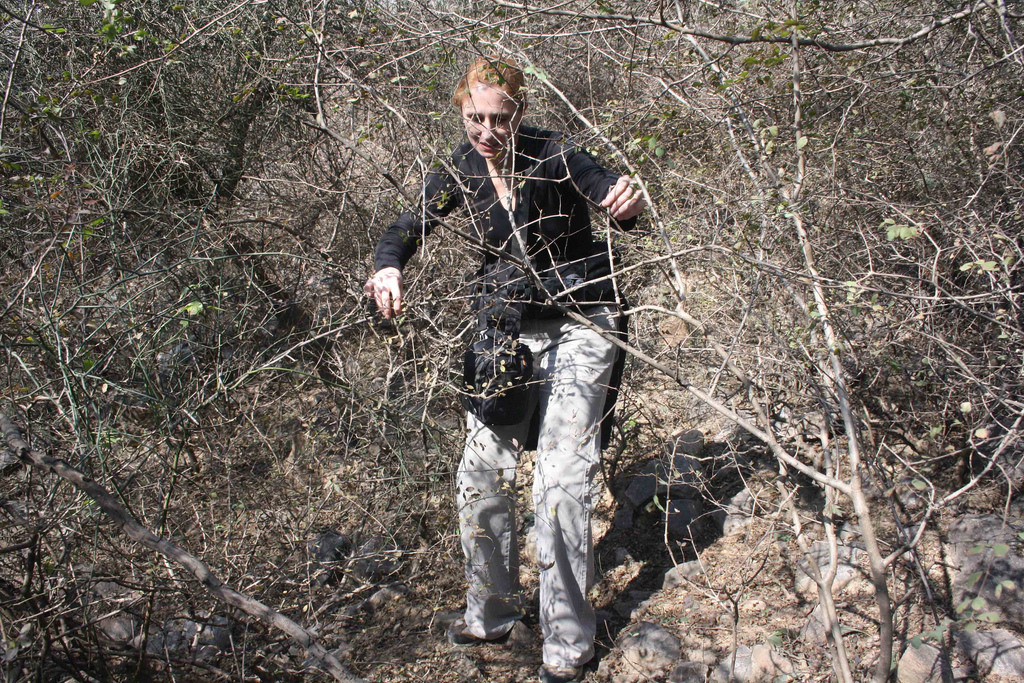 Secretive and silent. Intertwined trees, twisted trunks, thorny twigs, rocky slopes, and clumps of grass. The nearest McDonald’s is two miles away. The Delhi Walla is on Delhi’s Central Ridge, a forest in the Capital’s heart abutting Sardar Patel Road in Chanakyapuri.

Delhi’s pockets of wilderness are rarely frequented. The popular Lodhi Garden and Nehru Park are wooded but the grass is trimmed, the hedges pruned. The natural wilderness that once existed is now hidden, built upon or degraded. Connaught Place was a forest of babool trees before the British destroyed it to make a commercial district. Over the years, especially after independence, many parts of the Aravalli hills, which end in isolated hills and rocky slopes in the Capital, have been flattened to make way for neighbourhoods and bazaars.

The Ridge, the hilly spur of the Aravallis that survives in four distinct patches in and around the Capital, is Delhi’s lungs. It starts at Wazirabad, north Delhi, passes through Delhi University, and goes to Paharganj, where it was levelled and built over. The central portion, made into a reserved forest in 1914, extends from Sadar Bazaar to Dhaula Kuan. Some bits have since been nibbled away by petrol pumps.

The Ridge then surfaces in areas such as Jawaharlal Nehru University in the south, before culminating in the Tughlakabad stretch that includes the Asola Bhatti wildlife sanctuary. Mangar Bani falls in the last part.

Not far from the Chattarpur farmhouses in south Delhi, it is a spectacular sight. It is a 100-hectare jungle, consisting of dhau, a tree with small leaves and silvery trunk. A species that’s adapted to rocky land, there are great jungles of dhau in Ranthambore and in Bundelkhand, but here it is close to the limits of a metropolis, with the skyscrapers of Gurgaon threatening an invasion from the west.

Early morning is the best time to visit Mangar Bani. The forest is sacred, the trees are worshipped and there are two temples. The valley has a village of Gujjar herdsmen who believe in a mystic called Gudariyadas Baba. The forest has survived because of the faith of villagers. They believe that cutting a tree—even a branch—would invite Baba’s wrath. On Sundays, village children share stories of the invisible Baba under a banyan tree.

After the rains, tiny red velvet mites appear, their almost-luminous bodies in stark contrast to the greens around them. A monitor lizard, more than a metre long, ambles into the undergrowth. Above, a sunbird flits in the low branches. Underfoot, a centipede plays dead.

Walking in the valley reveals the fragile beauty of our fast-receding green cover. Pradip Krishen, an encyclopaedia on Delhi’s forests and author of Trees of Delhi, says, “Mangar Bani is like a little museum of what the rocky past of the Ridge must have looked like before being swallowed by Delhi.”

In summer, dhau sprouts new leaves. By the time the monsoon arrives, the area is one of the most beautiful sights in Delhi. “Standing on a cliff with the valley below you, it’s like looking at a giant cloud of green,” says Krishen. The new leaves of dhau have long silvery hair on their tips. When you look at trees from the distance, you see little silver points of light.

Another beautiful and strange forest, close to Mangar Bani, is in a former stone quarry on the Gurgaon-Faridabad Road, about a half-hour drive from Lodhi Garden in central Delhi. One weekend morning, Mr Krishen led a group of seven people there.

The quarry used to be excavated for Badarpur sand and Delhi quartzite, among the most commonly used construction materials. The mining in this area began in 1992 and, following a Supreme Court order, ended a decade later.

The group walked down a slope on which trucks once carried stones from the mine. The ground was red with Badarpur sand. The sides of the slope were made of the same sand; their depressions and fissures indicating that the surface was being eroded by water. The extraordinariness lay in that this sandy and rocky landscape was the site of a special ecosystem. The slender leafless stems of tamarix, a tree rare in Delhi, were just beginning to bloom with little pink flowers. The blue flowers of shankhpushpi were growing not an inch above the ground. The soil here is porous and does not retain water, so only a narrow band of plants survives. Siras, ullu and sheesham were the other trees.

While cicadas sounded in the undergrowth, the group clambered down to an area of flat, parched ground. At one corner of it stood a dhatura plant with a solitary white flower. A little further, on a slope, was a sand cave that housed a small community of Rhesus macaques, along with a few birds and insects. There were also signs of porcupine and palm civet. The cave’s packed sand could easily disintegrate and wash away in heavy rain, destroying the microhabitat it nurtures.

To the north, at the other end of the city, lies Shalimar Bagh. Nestled between shopping malls, banquet halls, bungalows and apartments are the 100-acre remains of a network of Mughal-era orchards and gardens. Shahjahan gave this land to his subjects on the understanding that their rent would be waived if they grew trees. In the 1857 uprising, the Indian sepoys fired at the British soldiers on the Ridge from behind these trees. After the British took over the city, they cut down most of these woods. Today the area is owned by the Delhi Development Authority.

Entering the Shalimar Bagh garden, also known as District Park, Sheesh Mahal Park, etc., gives an idea of what it must have been like when the grove stretched all the way to Subzi Mandi in Azadpur. Fruits that have gone out of fashion can still be found here: badhal, kamrakh, shehtoot, karaunda, amda and amla. Some trees are unwieldy; their limbs leaning close to one another, their branches embracing. The walkways are like ribbons choked with moss and grass. Bird sounds drown out every other noise. A few white cows complete this pastoral scene. You begin to wonder if Shahjahan’s greatest contribution to Delhi was its Walled City or this orchard.

The Walled City was, of course, built on the Delhi Ridge. The Jama Masjid, for instance, is on a hill. Much of Old Delhi has its neighbourhoods named after hills.

As Delhi has grown, it has lost vast folds of the Ridge. What is left is the semi-wilderness of trees such as dhak, khai, phulai, kareel and—most sadly—vilayati keekar, a thorny foreign import planted by the British that has singled-handedly wiped out many other tree species from the Ridge. Yet there are patches of serene, untamed surroundings. One such haven is in the Jawaharlal Nehru University, within earshot of Nelson Mandela Marg. There’s a stream, indigenous bushes, and native trees. Close your ears, and Delhi disappears.

Scenes from the Ridge Scenes from a stone quarry on the Gurgaon-Faridabad Road