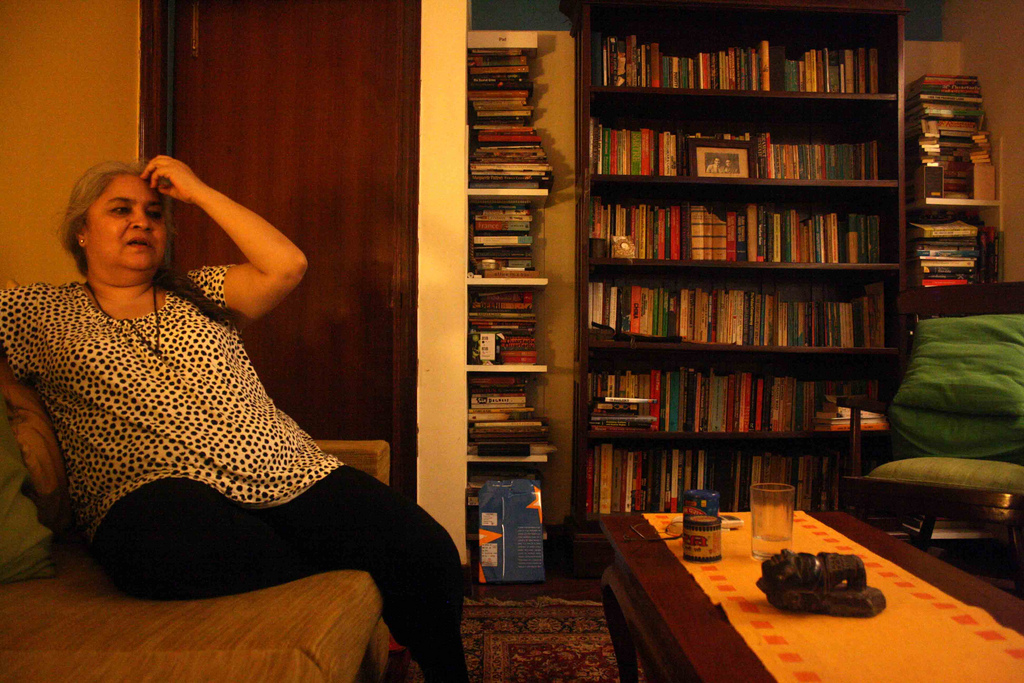 One rainy afternoon, The Delhi Walla knocked at the door of writer and editor Ira Pande. Now 60, Mrs Pande shares her ground floor apartment in Sector 93, Noida, a Delhi suburb, with her husband, Amitabha, and thousands of books. “Our collection is the work of generations,” she says. “Amit’s parents were passionate about books. Most Hindi books you see here on religion and spirituality belonged to Jiya, my mother-in-law.” She points out a shelf that has cloth-bound copies of Ramcharitmanas, the Hindu epic by poet Goswami Tulsidas.

While there are books everywhere, it is the Pandes’ study that is the hallowed haven of musty volumes; the air is thick with the memories of loved ones. One corner has a small alcove for Mrs Pande’s prayers and meditation. She points out a portrait there: “That was Jiya, my wonderful mother-in-law.” Framed family photos are arranged on the top of a bookshelf, beside the sofa. One of them is of her mother, the Hindi novelist Shivani, cradling Mrs Pande’s twin boys, Aditya and Aftab. An entire shelf on the facing wall is dedicated to Shivani’s novels. Taking out one of them (Chaudah Phere), Mrs Pande says, “This cover was designed by my son Aditya, a graphic artist.”

Aditya’s childhood portrait is tucked on a central shelf. It’s torn and only the sparkling eyes are visible. Behind it are novels by Virginia Woolf and Joseph Conrad. “Both my husband and I were students of English literature,” Mrs Pande says, pointing out shelves that hold lit-crit volumes. “We had the entire set of Penguin Modern Poets that was published in the 60s and the complete works of several avant-garde novelists and poets of the sixties and seventies. Over time, we have lost many: some to borrowers and some to silver fish.”

Waving towards the left shelf, she says, “My husband was a left-leaning young man and so you will find many books on social sciences and development. As a bureaucrat, he also developed a deep interest in the pedagogy of governance.” So one long shelf has, among others, Sarte’s Critique of Dialectical Reason, sandwiched between E.P. Thompson’s The Poverty of Theory and Avner Zis’s Foundations of Marxist Aesthetics.

Since her husband retired in 2008 as secretary to the government of India, “… he has discovered the joys of Facebook,” Mrs Pande says, pointing at the Apple Mac that is the study’s centerpiece. “This was a retirement gift to his father by Aditya.”

In the living room, the shelves are filled with old books belonging to Mrs Pande’s parents-in-law. One book prominently displayed on the counter is, however, new. India: The Cookbook, by Pushpesh Pant. The New York Times had called it one of the top 10 cookbooks of 2010. “Pushpesh is my cousin,” she says. “His house, too, is filled with books.”

Mystery novels are stacked in the dining hall rack. “Guests are allowed to borrow books from here. We also know that once they are borrowed, few are returned. But I suppose we can live with some missing thrillers and detective fiction.”

There are little shelves in the two bedrooms, too. Mrs Pande’s bedside books happen to be the new releases she is given for reviews. Besides editing the IIC Quarterly, a journal published by India International Centre, she writes as a freelancer for various publications.

On the dressing table is a purple paperback of Shamini Flint’s Inspector Singh Investigates: Singapore School of Villainy.

Where are the books that Mrs Pande’s novelist mother must have collected?

“Some are with my elder sister Veena who lives in Dehradun. Her husband has started a charitable trust called the Doon Public Library there. My mother’s more personal books, such as those that were presented to her by Tagore and other famous writers, are with my other sister Mrinal, herself a book collector.”

Who will inherit Mrs Pande’s collection?

“I hope my children will look after them after I’ve gone. All my three sons are fond of reading,” Mrs Pande says, looking around the shelves. “I can’t bear to give them away while I’m still alive. Every book has a history. We bought each with our hard-earned money. I didn’t invest in jewellery and my husband did not buy any real estate or property except this apartment for our retirement. I suppose you can say, that all our wealth lies in our collection of books.” The temple in the study