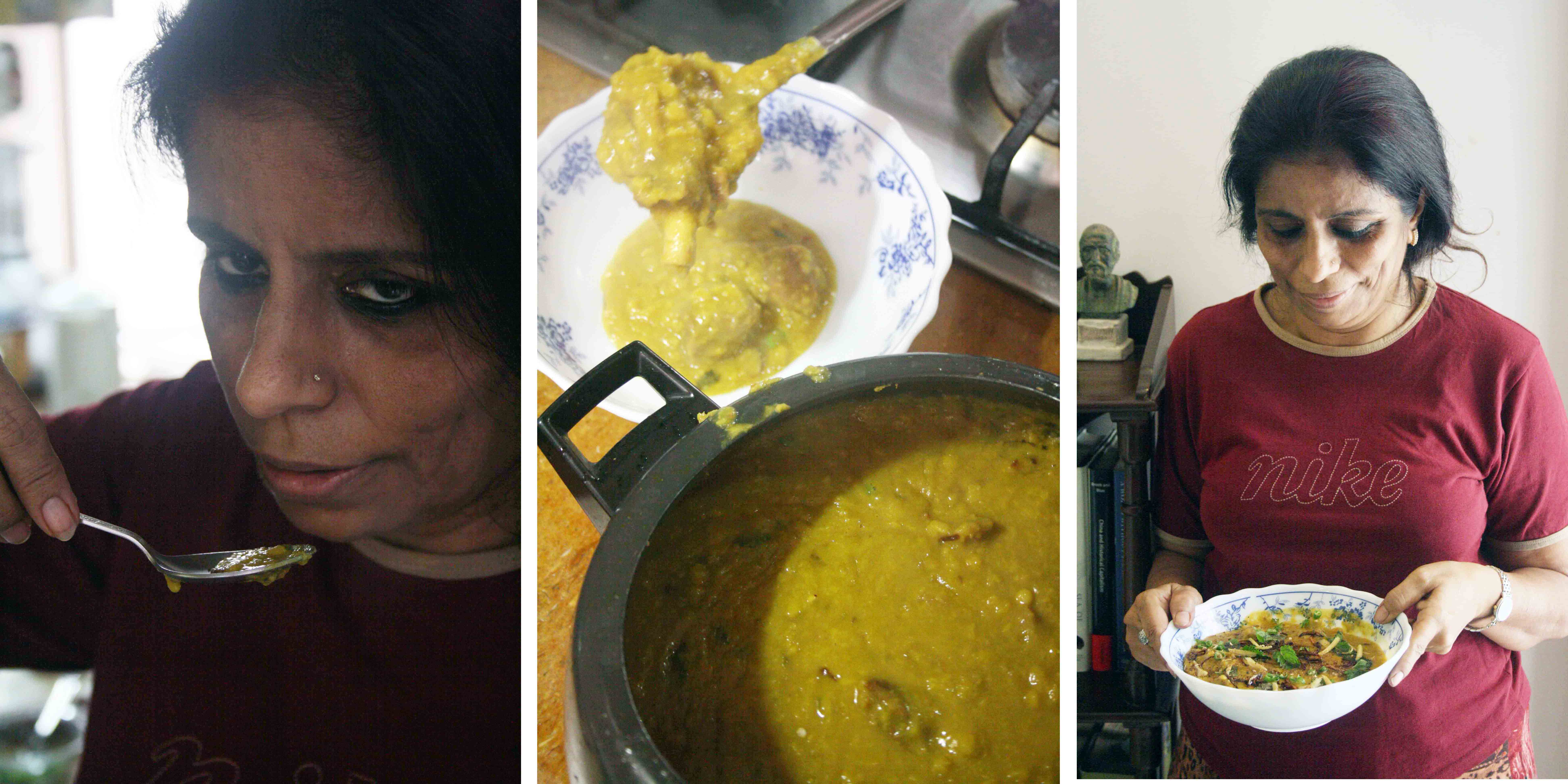 Ms Child grew up in various cities of India; her father had a transferable post in the Reserve Bank of India. The family always had cooks though mother, Razia, would guide the preparations of meals. Ms Child too has a kitchen assistant: Bela, a young woman from Jharkhand.

A Shite Muslim from Oudh, a region east of Delhi, Ms Child describes her homeland as the cradle of Ganga-Jamuna civilization, referring to the two holy rivers that flow through the area. In Oudh, Islam and Hinduism influenced each other more extensively than in Delhi in terms of custom, dress, language and food.

“Our dishes are very different from what is found in Delhi,” says Ms Child. “It’s not on-your-face kind of cuisine. Flavors are subtle. There are less spices and less oil. The meal infuses you with warmth, and not leaves you with a sense of bloated stomach.” Here is the recipe of Ms Child’s ‘chana dal ghosht’.

Each time I cook chana dal gosht, I’m reminded of Chehlum. It’s the 40th day of the martyrdom of Imam Husain in Karbala. Processions are organised and majlis, or gatherings, are held to commemorate the tragedy. The events of that sad day are narrated and elegies known as marsia are recited. In the morning, some Shite households in central and eastern Uttar Pradesh – formerly parts of Oudh – make chana dal gosht. It is first taken to the in-house or neighbourhood Imambara, where a prayer is offered for the redemption of the martyr’s soul. Only then is the dal distributed.

Soak dal for half hour in lukewarm water.

Wash the meat in warm water. Make sure that the pieces are small, so that the flavours are infused more thoroughly.

Heat oil in a large frying pan. Add the onion paste and fry.

When the oil starts coming out, add masalas (use only half of the turmeric powder) as well as 1 tbsp each of ginger and garlic paste. Stir till the oil again starts leaving the mixture.

Add meat. Pour ½ cup of water and sprinkle the salt.

Transfer the mixture into a pressure cooker. Cover the lid and let it cook for 10 minutes on a low flame after the whistle.

Boil dal in a separate pressure cooker. Make sure to add the remaining ginger and garlic paste, and turmeric powder. Add salt, too.

After ten minutes, open both cookers. Add dal into the meat and slow cook for 20 minutes.

Pour a little oil in a skillet and fry sliced onions and bay leaves till the onions are dark brown. Add them over dal gosht.

Transfer small portions of the preparation, while still hot, to earthen cups, which leaves behind a hint of the baked clay in the dal. Dal is soaked, meat is washed Proud of her creation