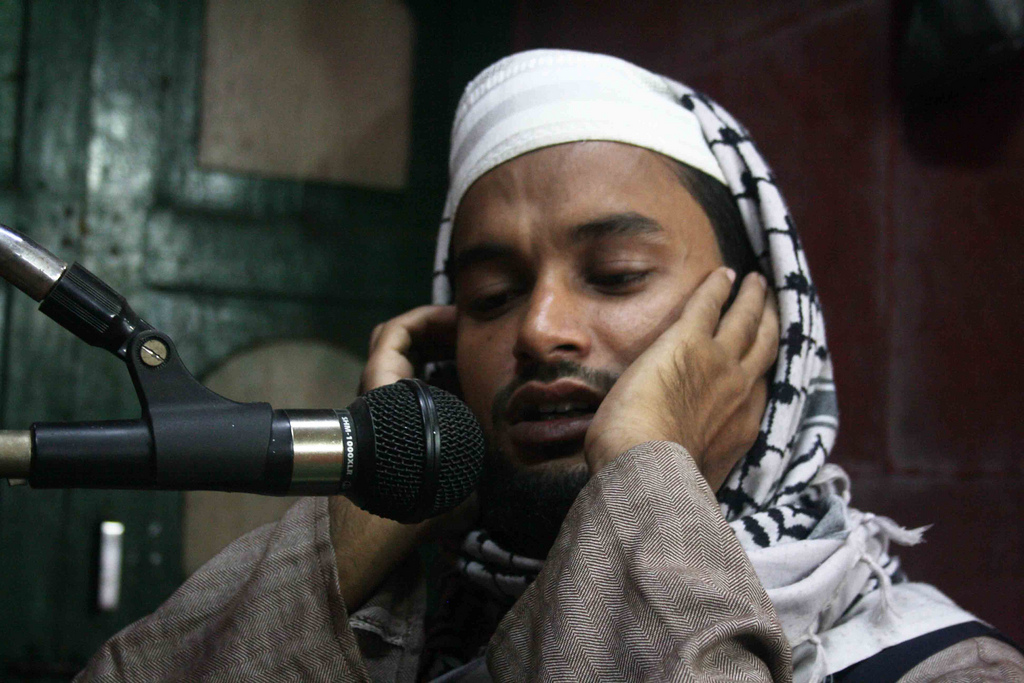 5.25 am. The sky is still black. It’s freezing. Holding the microphone close to his lips, he opens his mouth to recite the azaan, and… time stops.

The Delhi Walla is in Jamat Khana, a mosque built on one corner of the sufi shrine of Hazrat Nizamuddin Dargah. I’m watching Muhammed Iftikhar, a 21-year-old Koran teacher, call the faithful to perform fajr. It’s the first of the five prayers that Muslims enact daily.

Mr Iftikhar’s head is shielded from the cold by a white cap and a black-and-white kifayah. His eyes are closed, as a soft, lyrical sound emerges from him.

Lifting his palms to his ears, the bearded young man repeats the words.

Each morning, Muslims across the world wake up to a similar holy cry from their neighbourhood mosques. Most muezzins, the people who lead the prayer, simply produce a perfunctory call; a few create magic through soulful lonely tunes. Mr Iftikhar’s voice is unremarkable in conversation, but now it has transcended to an extraordinarily tenderness.

The sensations of these word-sounds appear to crystallize in the cold air, the next moment they vanish, constantly being replenished.

After concluding the call, Mr Iftikhar sits down on the carpet. The mosque was commissioned by one of the sons of Sultan Allaudin Khilji in the 14th century. Its entrance opens to Hazrat Nizamuddin’s tomb.

“I live in this mosque and sleep in the hujra there,” Mr Iftikhar says, pointing to a door adjacent to the wall that faces Mecca. Muslims pray facing towards this town in Saudi Arabia. “I teach the holy Quran to children.”

Two elderly people enter for prayer. They are draped in thick quilts.

Mr Iftikhar blushes as I congratulate him on the melodious style of his azaan. “I learned it from Maulana Siddiq, my ustad (master).”

Mr Iftikhar’s father is a maulavi (priest) in Jamshedpur, an industrial town in Jharkhand, eastern India. Eight years ago, his parents sent him for studies to a madrasa (Islamic school) in Hapur, a town 60km from Delhi. After he memorized the Quran and became a hafiz, Mr Iftikhar came to Delhi. “It is an honor to lead the call to prayer.”

Another man enters the mosque; he is wearing flannel trousers and a leather jacket.

“I have to do other things in life too,” Mr Iftikhar says, “I want to marry. But first, I wish to return to Jamshedpur. Although I frequently talk to my parents on the phone, I miss them desperately, especially my three brothers and my only sister.”

Perhaps because it is cold, only a few people have gathered to pray in the mosque. Getting up to join them, Mr Iftikhar says, “One day I will go back to my watan (country).”

He thinks for a moment, and then turning towards Mecca, his voice fading, as if he is talking to himself, he says, “I’ll start a karobaar (business).”

[This is the 51st portrait of Mission Delhi project]

Ready for the call