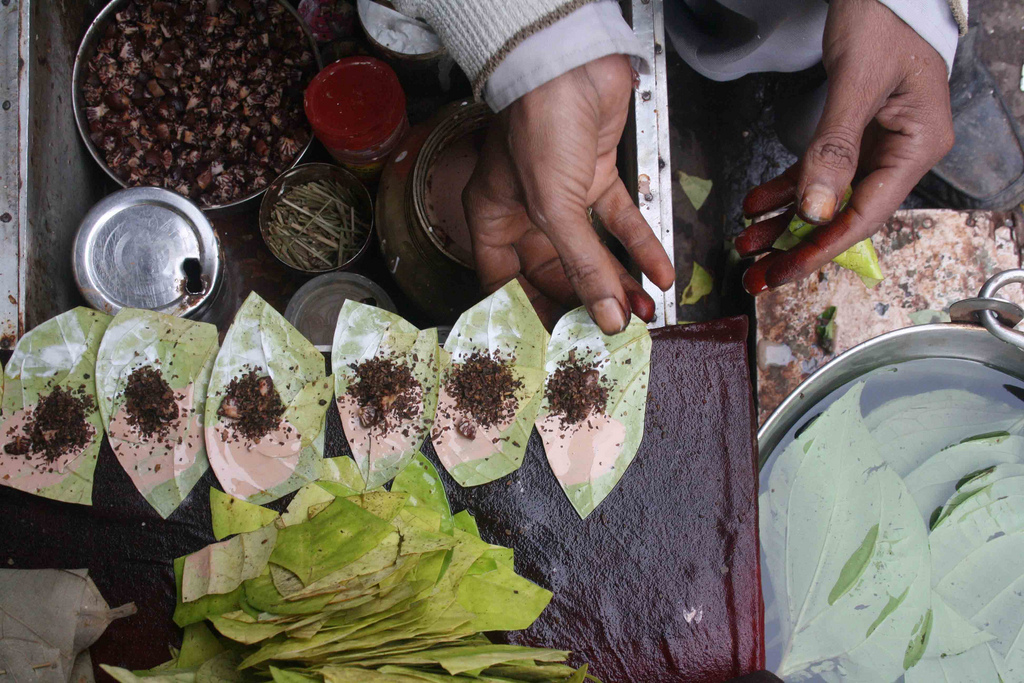 A foreign art critic visiting Delhi’s Connaught Place may be forgiven for thinking its red-splattered corridors are a form of abstract expression. Although the dirty white pillars of the colonial-era arcade were repainted in time for the 2010 Commonwealth Games, every column is again stained blood red.

If you are looking for a culprit, it’s paan, the edible betel leaf stuffed with supari (betel nut), tobacco (optional), lime paste, catechu and other piquant flavours. The oozing liquid fills up the mouth, and is either swallowed or—as is evident across the city—spit out. In Connaught Place’s F-Block, the wall that was temporarily white after the hasty makeover in 2010 is marked with the red saliva-ridden remnants of paan.

The autorickshaw driver, who is spitting out a mouthful of red fluid at a traffic light on Kasturba Gandhi Marg, sits at one end of Delhi’s paan chain. The source of the operation is Naya Bans bazaar, behind Fatehpuri Masjid in the Walled City, which supplies betel leaf to the entire Capital.

While it also has a wholesale centre for spices, tea and matchboxes, the bazaar is the hub for paan traders: some dealing in leaves; others in supari. In their stores, the big-bellied traders sit beside locked tijoris (steel chests). The floors have dozens of baskets filled with leaves; rats run from one basket to another.

Three times a week, trains chug in carrying the cargo from Orissa, Bengal, Rajasthan and Madhya Pradesh. The traders purchase on a commission basis; each basket, it is reckoned, contains 1,000 leaves. Like any precious commodity, the price fluctuates weekly, depending on the supply.

In the bazaar, hundreds of men bargain, shout, curse, push and spit. This bustle is deceptive. “The gutka (smokeless tobacco sold in sachets) is slowly killing the paan,” says Gauri Shankar Goyal, the pradhan (chief) of Dilli Paan Thok Vikreta Sangh, the bazaar’s association of paan traders. Blaming the packaged tobacco that finds more takers because of its low price and easy availability, Goyal says: “The paan business has gone down by 40% in the last decade. The bazaar used to commission 10,000 baskets daily. Now, we get half of that, three days a week.” According to Goyal, the bazaar’s daily turnover is Rs. 15 lakh.

In March 2011, a cover story in the science and environment magazine Down To Earth attributed the paan’s “royal fall” to the “contagious spread of chewing tobacco, especially gutka” and “skyrocketing input costs, water scarcity and unpredictable weather”, which meant “betel gardens are no more lucrative”. In August 2011, health concerns resulted in the Union government banning the sale of gutka and other chewing tobacco products.

It wasn’t always so. Author Khushwant Singh wrote in City Improbable: Writings on Delhi that the sons of Delhi’s rich patronized the tawaifs (courtesans) of Chawri Bazar, attending their mujras, bantering with them in flowery Urdu and receiving paan from their hands. Mr Smith cites a passage in Ahmed Ali’s Twilight in Delhi, which brings alive the world of the paan sophisticate: “Begam Nihal sits up, draws her dome-shaped paan-box, puts lime and katha on a betel leaf, then adds finely-cut areca nut, some cardamom, a little tobacco, rolls it up and puts it in her mouth. Then she lies down again and begins to fan herself, occasionally fanning her daughter too…”

In Mughal-era Delhi, writes historian Annemarie Schimmel in The Empire of the Great Mughals, offering paan was a sign of friendship, as its acceptance was a gesture of commitment. If a business deal or wedding agreement was reached, paan, wrapped in flimsy layers of gold or silver, would be served from elaborately carved paandans. Unlike the shoppers in Connaught Place, people would spit the juice in spittoons made of precious metal.

Paan civilization had already reached Delhi by the time the Mughals were making inroads from central Asia. In the book Society and Culture in Medieval India, 1206-1556 A.D., author A. Rashid says Sufi saint Hazrat Nizamuddin Auliya was fond of paan. His great disciple, the Persian poet Amir Khusrau, composed verses and riddles in praise of “Hindustan’s most beautiful delicacy”. Among the many artefacts in the new Islamic wing of New York’s Metropolitan Museum of Art is a paandan from India.

The aristocrats devised a paan-eating etiquette that was followed in Delhi till as late as the 1960s. Mr Smith says once the paan was accepted, the eater had to salute the person who had offered it. The gillori (the stuffed betel leaf) would be enclosed in a silver clasp that had to be removed before delicately positioning the leaf in the mouth. Kept to one side of the receiver’s mouth, the paan was not chewed but was expected to dissolve slowly. When the liquid had to be expelled, the paan eater would cover his mouth with the palm of his hand and spit into the silver (or brass) spittoon without a sound.

Today, we have rejected these rituals. “Chew and spit” is the mantra, as the stained white columns of Connaught Place testify. “I’ve seen men spitting paan on the pillars,” says Vijay Pal, a New Delhi Municipal Council sweeper in Connaught Place. “But I’m afraid to stop them lest they beat me. And anyway this is India.”

What goes on in the mind of a paan spitter? “This act of splattering on what was a newly-renovated clean white space of Connaught Place shows the paranoia of the emerging society in which we are suspicious and dismissive of anything that we think doesn’t belong to us,” says Deepak Raheja, psychiatrist, and director at Hope Foundation, New Delhi. “The urge to disfigure something that is so spotless depicts our pent-up frustrations. It also betrays a violent streak.”

Tell this to the paan-eating woman who has been seeking alms daily at the side entrance of Fatehpuri Masjid for 25 years. She doesn’t appear violent. “I earn about Rs. 40 every day and I spend all of it on paan,” says Iqbal Bano. “Sometimes I ask for paan, not paisa.” Exposing her red-stained teeth, she grins and assures The Delhi Walla, “I brush daily.”