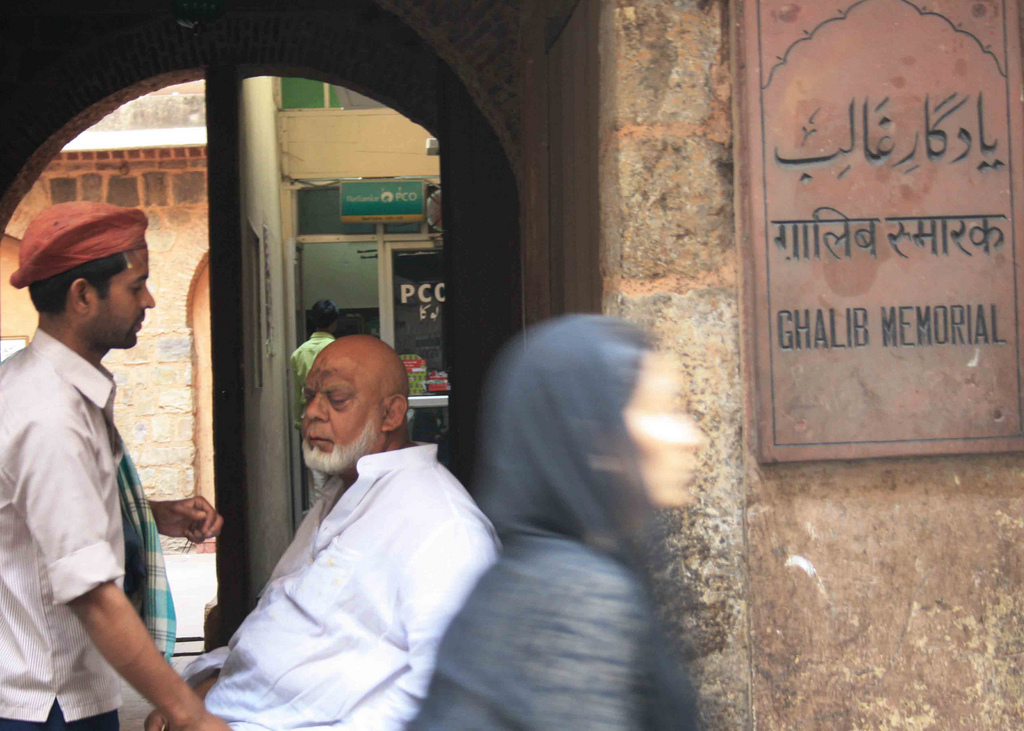 Every 27 December, on Ghalib’s birthday, his admirers march to his haveli in Shahjahanabad with lighted candles and give sound bites to the media on the poet’s relevance. As if he needs this lip service(!)

What Shakespeare is to the English language, Mirza Ghalib (1797-1869) is to Urdu. He exploited a courtly language to compose verses of lustful love, piquant ironies and bawdy humour.

Mughal princes loved his works, as did roadside tipplers. Today, Bollywood actors lip-sync his poetry and Indian politicians quote him in their speeches.

But nothing of the poet’s popularity is reflected in the house where he spent his last nine years. Ghalib’s last home lost its original flourishes of frescoes, alcoves and archways, following several sub-divisons and additions over the years. Reduced to a dimly lit gallery, a small verandah and a claustrophobic courtyard, it was a coal-store at some time in the past. Ghalib would have chuckled.

Restoration has transformed the haveli into a makeshift museum with facsimiles of Ghalib’s letters, some spotty pictures and curiously, utensils of Ghalib’s time. Apart from his books on display, a chart shows Ghalib’s favroite dishes (bhuna ghosht and sohan halwa).

In 2011, news channel NDTV turned its short attention span to Ghalib’s haveli, and followed a familiar chest-beating exercise of the media when it comes to reporting on the poet (Oh, Urdu is dying! Oh, drunkards are drinking in Ghalib’s haveli!). The channel’s website said:

“The haveli in Gali Qasimjan in the Ballimaran area in the heart of old Delhi, where Ghalib died on February 15, 1869, is a favourite spot for holding wedding receptions.

At other times it sees tied-up goats or the labourers of an adjacent guesthouse using the place to catch a quick nap – despite the house being taken over by the Delhi government to be converted into a monument.

The state culture department has just made some perfunctory and cosmetic repairs to the structure. The haveli houses lately a bust, some framed pieces of Ghalib’s ghazals, some books on the poet, copies of a few letters in Ghalib’s handwriting and a few brass utensils from the poet’s times.

The inner cubicle where Ghalib’s statue is there with a book, has been littered with empty cardboard cartons, a blanket and the bag of the guard there who is hardly seen there.

It’s been over a year and a half since Delhi Chief Minister Sheila Dikshit was approached for further renovation and lighting in the haveli. Dikshit spoke to Culture Secretary Keshav Chandra but nothing has been done. Of late, Chandra has even stopped responding to phone calls.”

The same year, Indian Express published an editorial titled A haveli for Ghalib:

“Sometimes you step out of the book to search for the author — you haunt Emily Dickinson’s lonely house in Amherst, you count the trees that inspired Kerouac on the road, you leave earnest lipstick mementos on Wilde’s tombstone, you seek out the mangosteen tree under which Vaikom Muhammad Basheer wrote. Literary pilgrimages are an irrational quest for the tangible past of a writer — the desk gets fetishised, the pen becomes a totem, even the sarcophagus is sacred — but such journeys are almost futile in India, where we are such confirmed philistines when it comes to preserving old houses only because a writer once lived there. Kings and forts, we still get.”

Why be a drama queen? If Ghalib’s haveli was as neat as a museum, it would have looked foreign in Shahjahanabad, a city in decline.

The courtyard looks to the back of a high-rise, the wall of which is splattered with paan stains and lined with sewage pipes. A shop, adjacent to the courtyard, sells mobile phone cards. Fruit vendors sit outside the entrance. The haveli is flanked by stores selling China-made eyeglasses. Ear-cleaners walk in the vicinity, hunting for customers.

When he was on his death-bed, Ghalib wrote, “I sleep in the courtyard. Two men carry me onto the veranda and dump me in a small, dark, side room. I spend the day lying in its dingy corner. In the evening, I’m again carried out and dumped on the cot.”

These days not many Delhiwallas read Urdu and few care for poetry. But Ghalib immortalised the thrill of 19th-century Delhi and if you feel for this city, you must pay this place a visit. No one’s watching, flick him