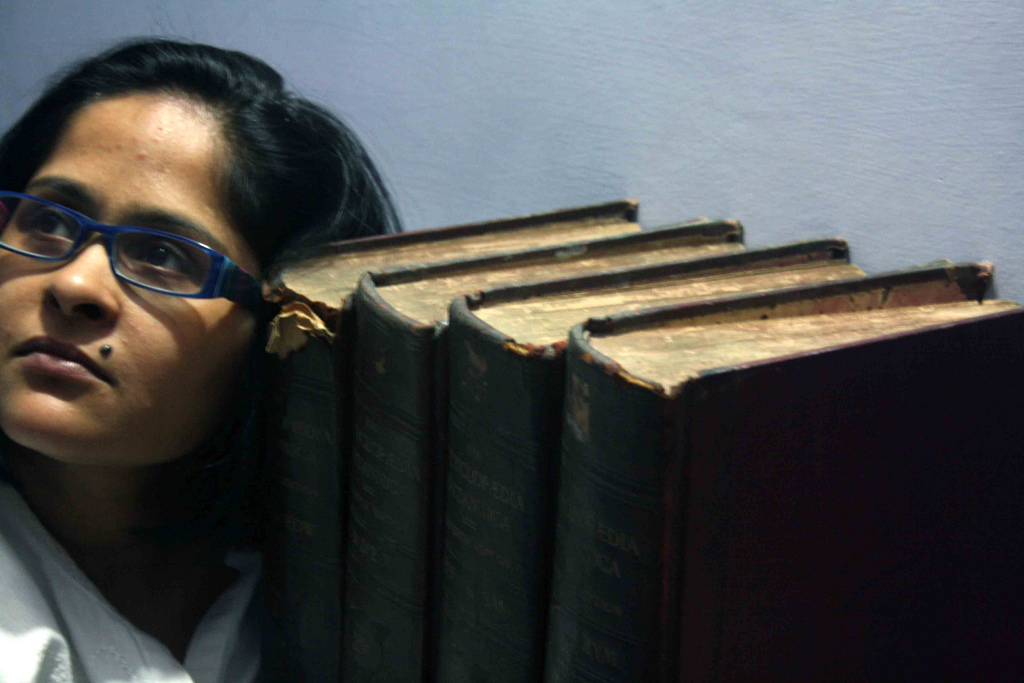 One evening The Delhi Walla knocked at the door of Payal Singh, keeper of her family’s treasure: six hardbounds of the eleventh edition of Encyclopedia Britannica.

In her 30s, Ms Singh, an interior designer, lives with her husband and daughter at an apartment in Vaishali, a suburb beyond the borders of East Delhi.

“These hefty books belong to my mother’s father,” Ms Singh says. “He was an English teacher and could recite the entire Shakespeare from heart.”

The volumes in dark brown suede constitute Ms Singh’s entire library. They are precious, especially so after the company that produces the famed reference books announced in March 2012 that henceforth, according to the UK-based The Independent, Encyclopedia Britannica will concentrate on the online encyclopedias, and that the last-ever print edition – a 32-volume set weighing 129 pounds – won’t be replaced when the last 8,000 sets are finally sold.

Ms Singh’s encyclopedias are also more valuable because the eleventh edition, published in 1910 and 1911, was considered a masterpiece. It was not merely used for reference, but was also read for pleasure.

Writing in The New Yorker‘s website, author Roger Angell describes ‘The Eleventh’ as “the most popular and acclaimed edition of them all — the Koh-i-noor, the Cary Grant of the genre.”

Like many others, the website of the Canada-based newspaper National Post also published a story on the closure of the print run of Encyclopedia Britannica. It referred to The Eleventh, saying:

Connoisseurs agree that the 29-volume 11th edition, published in 1911 in association with Cambridge University, was far and away the best. It appeared about the time the ownership of the Britannica was moving from Britain to the United States, where it was soon owned by Sears Roebuck and later became part of the University of Chicago.

The 11th was the first edition with a comprehensive index and the first to include biographies of living people. The editors enlisted distinguished writers to contribute many articles, a practice later abandoned. In the 11th, Thomas Henry Huxley wrote on biology, Bertrand Russell on geometry, Algernon Swinburne on Mary Queen of Scots and Prince Peter Kropotkin, famous as both a philosopher and an anarchist, on the philosophy of anarchism. The illustrations were so good that single pages were often framed and sold separately. When Jorge Luis Borges received his first literary prize, he used the money to buy a copy of the 11th and cherished it for the rest of his life.

The 11th has become popular with historians as a true picture of the world’s mind at the end of the Edwardian era. One problem is that it’s so readable that those who go to it for a single article frequently find themselves spending several hours lost in its pages.

Opening volume 23, I find a page that shows the presence of silverfish.

Caressing the spines of her Encyclopedia Britannica leftovers, she says, “I find joy in pursuits other than reading but these books have been passed down a generation and it is my duty to look after them.”

Death, the permanent cessation of the vital functions in the bodies of animals and plants, the end of life or act of dying.

Of a lost time

Inside look of a rare edition The power and the glory