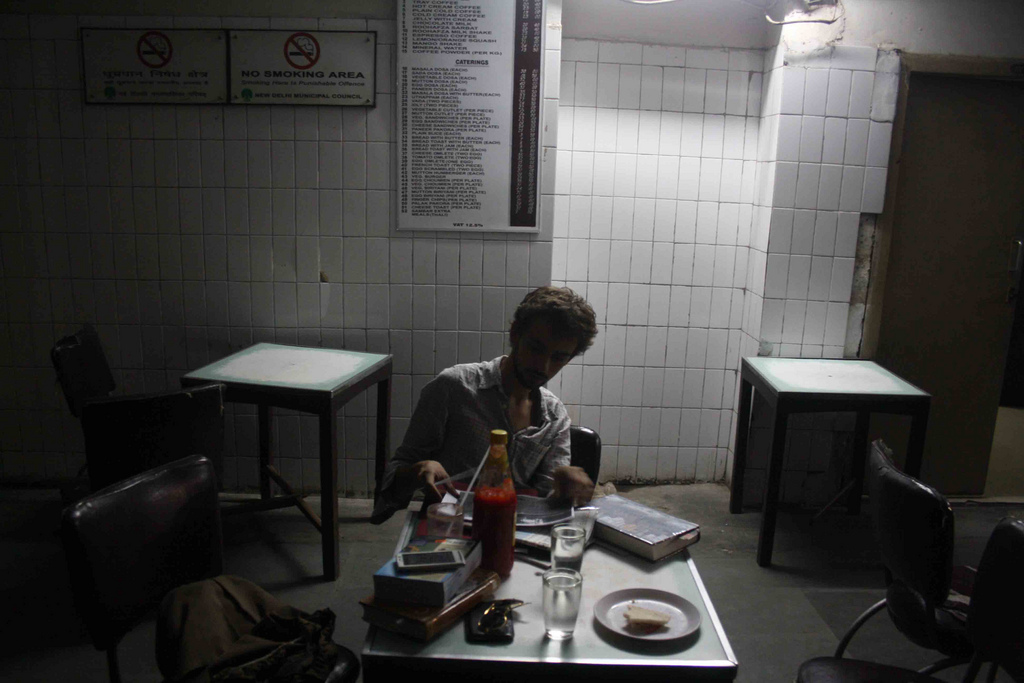 Today is the 15th meeting of The Delhi Proustians, a club for Delhiwallas that discusses French novelist Marcel Proust. Every Monday evening for an hour we read his masterpiece, In Search of Lost Time.

It is 7 pm and The Delhi Walla is with Jonas Moses, a Frenchman who lives in north Delhi.

Today I haven’t got the novel. I’m coming straight from my ancestral village, which lies north of Delhi.

“I could not hold the club meeting last week,” I say. “My uncle died. It was scary to have such a loss in the extended family. The normal patterns of life suffered and shrunk to this single event. For a few hours I could not read and I could not bring myself to eat. It was as if my mouth was filled with death. The things I took for granted – taking a stroll in Shahjahanabad alleys, buying books in Daryaganj’s Sunday Book Bazaar, watching important people in Khan Market – became dream-like. I thought of all those people with whom I daily commuted in the metro… they seemed so lucky. While my family was discussing the logistics of taking the ‘body’ to our village, those people in the metro were carrying on with their lives as if nothing had happened.”

Mr Moses says, “Proust must have said something on death.”

I Google ‘Poust’ and ‘death’ on my mobile phone internet. We reach a page. Mr Moses reads:

We say that the hour of death cannot be forecast, but when we say this we imagine that hour as placed in an obscure and distant future. It never occurs to us that it has any connection with the day already begun or that death could arrive this same afternoon, this afternoon which is so certain and which has every hour filled in advance.

“When I was in the village,” I say, “I had a Jane Austen in my pocket though I did not read it. One afternoon as I was walking in the old parts of the village, I was reminded of Combray where Proust’s narrator went in his childhood. There were old brick houses and cobbled streets and ancient wooden doors and arched windows and one house had collapsed and its doors were still standing erect and I stood on the rubble and looked down at those doors and I thought of Proust’s novel.”

After a few minutes, I say, “I had taken a few photos of the village from my mobile phone camera. I have black & white prints of some of them. Will you like to see?”

He stops at the photo in which a train is chugging along a green field.

“That’s the village station,” I say.

“A temple!” he says, pointing at a tower partially hidden behind the train.

“It’s like that scene from Swann’s Way,” he says, referring to the first volume of Proust’s novel, “in which the narrator is in the train that is nearing Combray and his father spots the steeple of the village church.”

The steeple of Saint-Hilaire could be distinguished from a long way off, inscribing its unforgettable form upon a horizon against which Combray had not yet appeared; when from the train which brought us down from Paris at Easter-time my father caught sight of it, as it slipped into every fold of the sky in turn, its little iron weathercock veering in all directions, he would say: “Come on, get your wraps together, we’re there.”

And on one of the longest walks we ever took from Combray there was a spot where the narrow road emerged suddenly on to an immense plain, closed at the horizon by strips of forest over which rose and stood alone the fine point of Saint-Hilaire’s steeple, but so sharpened and so pink that it seemed to be no more than sketched on the sky by the finger-nail of a painter anxious to give to such a landscape, to so pure a piece of ‘nature,’ this little sign of art, this single indication of human existence.

I look at the temple of my village.

As one drew near it and could make out the remains of the square tower, half in ruins, which still stood by its side, though without rivalling it in height, one was struck, first of all, by the tone, reddish and sombre, of its stones; and on a misty morning in autumn one would have called it, to see it rising above the violet thunder-cloud of the vineyards, a ruin of purple, almost the colour of the wild vine.

“This last passage could be a description of my father’s village,” I say.

“Perhaps he did stop by my village.”

“Perhaps he walked the same streets you walked through last week.”

“Perhaps he met my grandfather.”

The 16th meeting of The Delhi Proustians takes place on 9 April, 2012. Scenes from the Proustian Land