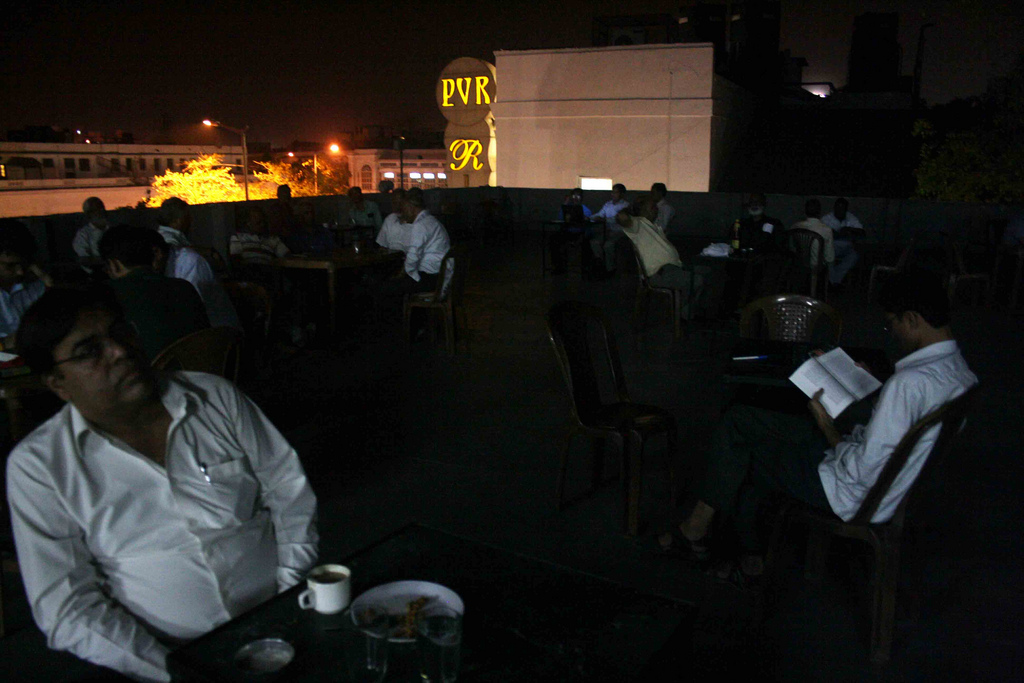 Today is the 16th meeting of The Delhi Proustians, a club for Delhiwallas that discusses French novelist Marcel Proust. Every Monday evening for an hour we read his masterpiece, In Search of Lost Time.

It is 7 pm and The Delhi Walla is sitting on the terrace of the coffee house. The wind is refreshing. I have ordered jam-toast and scrambled egg. Swann’s Way, the first of the six volumes of the novel, is on the table.

“I’m going to read one of my most beloved parts in the novel.” I say to law student Abdul Muqhtadir, a regular Proustian.

I open page 294 and give the book to Mr Muqhtadir. He starts to read.

The year before, at an evening party, he had heard a piece of music played on the piano and violin. At first he had appreciated only the material quality of the sounds which those instruments secreted. And it had been a source of keen pleasure when, below the delicate line of the violin-part, slender but robust, compact and commanding, he had suddenly become aware of the mass of the piano-part beginning to emerge in a sort of liquid rippling of sound, multiform but indivisible, smooth yet restless, like the deep blue tumult of the sea, silvered and charmed into a minor key by the moonlight.

A monkey passes by our table. Are there monkeys in France?

But then at a certain moment, without being able to distinguish any clear outline, or to give a name to what was pleasing him, suddenly enraptured, he had tried to grasp the phrase or harmony — he did not know which — that had just been played and that had opened and expanded his soul, as the fragrance of certain roses, wafted upon the moist air of evening, has the power of dilating one’s nostrils.

“What do you feel?” I ask Mr Muqhtadir.

Looking overwhelmed, he draws back his head, closes his eyes and remains silent for a few moments. Opening his eyes but seeming to stare at some distant object, he says, “I can’t understand it fully but I’m finding it beautiful.”

“Isn’t it as if he has managed to make music more real? As if we can touch it?”

Perhaps it was owing to his ignorance of music that he had received so confused an impression, one of those that are none the less the only purely musical impressions, limited in their extent, entirely original, and irreducible to any other kind. An impression of this order, vanishing in an instant, is, so to speak, sine materia.

This passage is impenetrable. As Mr Muqhtadir continues to read, I’m telling myself, “I must not be depressed if I can’t understand Proust fully. It is a lifetime project. Maybe I will get it ten years later. I must not be hard on myself. In any case, I feel beautiful even in the incomprehensible parts…”

“… Marcel is opening my eyes, teaching me to look through things, guiding me… no, making my senses sensitive to the various layers that makes up a person, or a monument, or… just anything.”

… it was no longer impossible to grasp. He could picture to himself its extent, its symmetrical arrangement, its notation, its expressive value; he had before him something that was no longer pure music, but rather design, architecture, thought, and which allowed the music to be recalled. This time he had distinguished quite clearly a phrase which emerged for a few moments above the waves of sound.

It has grown dark. Mr Muqhtadir pauses. He tells me, “This is now no longer about music. The description of this experience has transcended its scope and has become something more universal. These same expressions could be used to depict the elements of today’s windy evening.” He is picking up my glass to drink water. I exclaim, “No, I washed my fingers in it!”

It had at once suggested to him a world of inexpressible delights, of whose existence, before hearing it, he had never dreamed, into which he felt that nothing else could initiate him; and he had been filled with love for it, as with a new and strange desire.

“Yes,” I say. “Look at the people around us. These dark shadows… what secrets they are carrying within themselves… look at the neon signs of Connaught Place… and the unlit buildings… this whole city… it is so familiar to me and yet, especially after each time I read Proust, this city looks so new and strange… ”

It is starting to rain. I’m thinking of the rain scene of Satyajit Ray’s Pather Panchali and of Ravi Shankar’s music in that film. How would have Marcel described it? As windy as in Combray