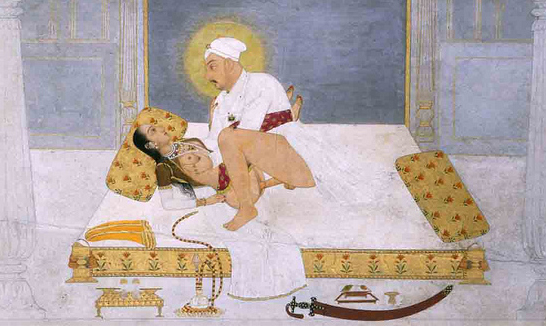 [Text by Mayank Austen Soofi; pictures given by Asia Society and British Library]

He was born in Fatehpur Sikri, a former Mughal capital. Crowned at the age of 17 by the scheming Sayyid brothers, Muhammad Shah later got rid of them, and brought a sense of stability to the empire. He died at 46. It was during his reign that Delhi, the seat of the Mughals, witnessed an extraordinary cultural life.

New York’s Park Avenue was briefly home to the gilded age of Muhammad Shah and 12 other Mughal emperors, most of them largely forgotten. “The later Mughal period after Aurangzeb is a blank to most people, including scholars,” William Dalrymple, author of The Last Mughal, told The Delhi Walla. But the Shahjahanabad (Old Delhi) of that time was a world of princes and courtesans, invaders and colonizers; a place where power struggles and political intrigue ran parallel to poetry and painting.

In early 2012, the Asia Society Museum in New York hosted Princes And Painters in Mughal Delhi, 1707-1857, a three-month (7 February-6 May) exhibition of 100 artworks from the later Mughal period acquired from museums and private collectors across the world.

Jointly curated by Mr Dalrymple and art historian Yuthika Sharma, the show was accompanied with a lavishly illustrated book of the same title. It has essays by six scholars.

The delicately drawn portraits and landscapes in the book highlight the vanity of the successors of Aurangzeb, the last of the great Mughals, who died in 1707. Their stately profiles in courts, palaces and gardens hide the reality of an unstable reign: One emperor had his head severed, another was blinded with needles. But the book also illustrates the revival of Delhi’s cultural life which was dimmed during the reign of an austere Aurangzeb who banned music, wine, hashish and dancing girls.

If the drawings of Shahjahanabad’s court painters in the years following his death are anything to go by, the period marked an upsurge in decadence. Consider a few samples from the book: the emperor riding a horse in his private garden; the emperor celebrating Holi; the emperor and his harem watching an elephant fight in a royal courtyard.

The emperor in these drawings is Raushan Akhtar Muhammad Shah. For 29 years, from 1719-48, he barely took the trouble to make war, watched partridge fights in the morning, and was entertained by mime artistes in the evening. Frequently dressed in a woman’s tunic and pearl-embroidered shoes, he was bestowed the moniker of Rangila, the colourful one. Though no letters or any other writings of Rangila have survived, second-hand accounts suggest a man of gentle passions.

In the exhibition book, Malini Roy, a specialist in late Mughal painting and a British Library curator (visual arts), writes:

Through the synergy of Emperor Muhammad Shah and the artists of the imperial studio, the Mughal painting tradition preserved, and a distinctively new style emerged that was reflective of the emperor’s joie de vivre.

Although Rangila’s hedonistic impulses did not stem Delhi’s political decline, it also did not impede the flowering of the city’s cultural renaissance. Under the patronage of his court, which succeeded the short and indifferent reigns of seven rulers in 12 years, Shahjahanabad witnessed an explosion of extremely sensual and colourful cultural resurgence. The introduction in the book tells us that during his reign, Shahjahanabad benefited from the services of at least 22 scholars, including great theologians and mystics such as Khwaja Mir Dard, Shah Waliullah and Mir Taqi Mir, and a vast number of Urdu poets, musicians and painters. The city also had a reputation for attracting the best dancing girls.

As emboldened Mughal governors of Bengal, Awadh, Gujarat and Hyderabad were establishing their own dynasties and Marathas were defeating the Mughals in the south, Rangila’s capital was obsessed with the finer things in life. The poets composed new verses in the qahwa khanas (tea houses) of Chandni Chowk, the courtesans performed Kathak in the establishments of Chawri Bazar and Meena Bazaar, the qawwals performed in the dargahs of Mehrauli, and Rangila worked overtime to live up to his title. One painting that could not be included in the exhibition because of logistical difficulties is of Rangila making love to a woman. In the collection of the British Library in London, it leaves nothing to imagination. Mr Dalrymple says that Rangila was believed by many to be an impotent man and the porn-painting could have been a part of the imperial propaganda.

There was a brief interruption in Rangila’s revelry in 1739, when the Persian invader Nadir Shah massacred thousands in Chandni Chowk and took away the Koh-i-Noor diamond, now in the hands of the British.

In spite of the loot and the murders, Rangila’s capital did not lose its artistic allure. The book Muraqqa-i-Delhi: The Mughal Capital in Muhammad Shah’s Time is indicative of this. Written between 1738 and 1741, the Urdu-language travelogue by Dargah Quli Khan acts as a guidebook to the sacred pursuits and wicked pleasures of Shahjahanabad. If one part has respectful sketches of Sufi saints, another reads like an encyclopaedia of the city’s tawaifs.

Connoisseur Khan tells that Zeenat’s “well-shaped figure and coquetry helps increase the lust of the people”. Kali Ganga’s “dark complexion is like the black eyes of a doe”. Nur Bai, who travels only on an elephant, is known for “bringing ruin to many houses”. Behnai has mace bearers as servants. Chamani, who “enhances the eloquence of her conversations with the use of appropriate idioms”, has “crossed the threshold of her youth” but still has access to badshah Rangila.

The impressions of Hyderabad’s Dargah Quli Khan serve as an unofficial accompaniment to the pictorial exhibition guide of Dalrymple and Sharma. However, their investigation of Shahjahanabad through its artistic aspects does not end with Rangila. He is merely a starting point to the story of a capital that would see more emperors, more massacres and more devastation.

There would be a second cultural revival under Akbar Shah II (1806-37), but that world would crumble in 1857, with the British bringing down Babur’s dynasty by exiling Bahadur Shah Zafar—the last Mughal—to distant Rangoon (Yangon).

Many of us are familiar with the events that led to the collapse of Shahjahanbad following the uprising. The poetry of Mirza Ghalib and Bahadur Shah Zafar, who was himself an accomplished poet, is still recited in the select gatherings of Pahari Imli and Chitli Qabar in Shahjahanabad. But Rangila remains one of the few Mughal emperors to suffer the ignominy of having no road in Delhi named after him.

“He is not perhaps considered among the Great Mughals,” says Mr Dalrymple, “because Nadir Shah destroyed Delhi under his watch.”

The Asia Society Museum exhibits that were displayed at a cost of $1.5 million (around Rs 8 crore) will never come to Delhi, Mr Dalrymple says, because no such institution in India has that kind of money and it would be impossible to surmount the logistical challenges.

But at least we have tombs.

The most eminent Dilliwallas of Rangila’s Shahjahanbad are buried in rarely visited corners of the city. Mir Dard’s tomb lies in a slum near Minto Bridge. Shah Waliullah’s grave is in the cemetery enclosed within the campus of Maulana Azad Medical College. Muhammad Shah Rangila was buried in the dargah of Sufi saint Hazrat Nizamuddin Auliya. A marble screen separates the tomb from the shrine’s courtyard. The chamber used to be filled with excitable pilgrims claiming to be possessed by djinns. In 2012, the dargah administration started locking the tomb during the day. Rangila is left alone.