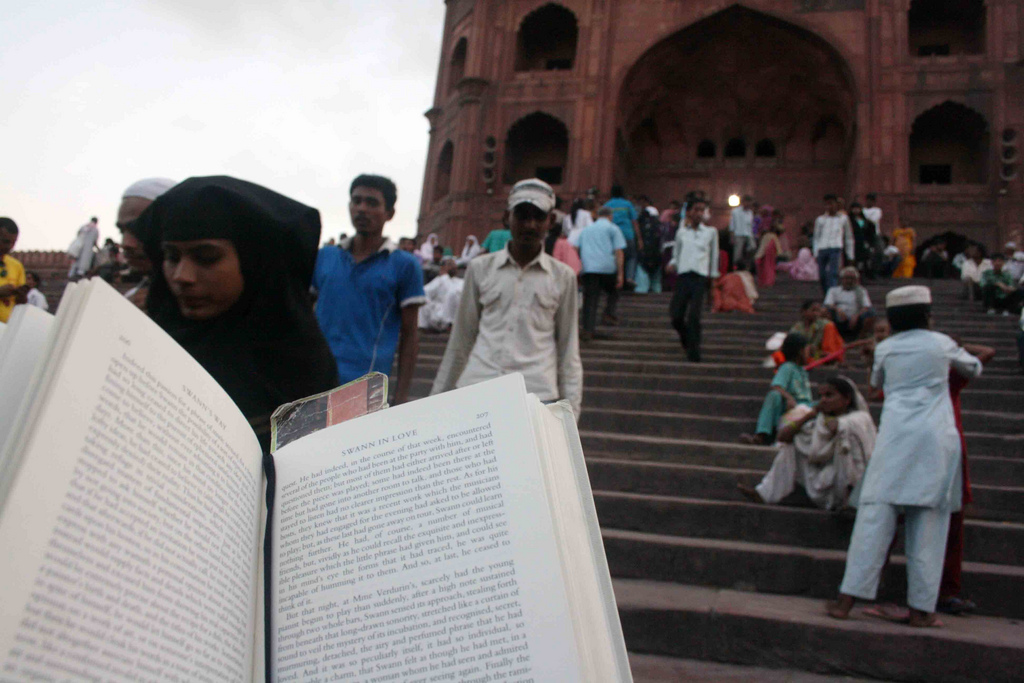 Today is the 21st meeting of The Delhi Proustians, a club for Delhiwallas that discusses French novelist Marcel Proust. Every Monday evening for an hour we read his masterpiece, In Search of Lost Time.

It is 7 pm and The Delhi Walla is sitting on the stairs of Jama Masjid in Shahjahanabad. I am on page 206 of Swann’s Way, the first of the seven volumes. It is a beautiful scene – Monsieur Swann absorbed in a piece of music.

With a slow and rhythmical movement it led him first this way, then that, towards a state of happiness that was noble, unintelligible, and yet precise.

I look up the stairs. A dark puff of cloud is wafting across the sky. No, it is motionless. The stone gateway of the 17th century mosque is at the foreground. I look at my book. Yes, it is true. In Search of Lost Time makes for a difficult read. And that is why I am committed to it. Each time I read and re-read an especially challenging passage, I grow more involved with the book. I feel as I am wading deeper within myself.

Sometimes, Lost Time does not feel like a novel. It makes me feel as if I am interacting with something that is embedded within my heart. I feel as if I had written this book… in some other lifetime.

And then suddenly, having reached a certain point from which he was preparing to follow it, after a momentary pause, abruptly it changed direction, and in a fresh movement, more rapid, fragile, melancholy, incessant, sweet, it bore him off with it towards new vistas.

To Swann, this happened with music. To me, it happens with Proust. While transporting myself from one sentence to another, I am occasionally lifted to the intellectual and sentimental heights of its author. We become one. It is a state similar to the one reached during the climactic moments of lovemaking when our physical self and our emotional self is entwined with that of our companion. Such a union is transient but the memories of the extraordinary happiness that envelopes us in this short period nourishes our soul during the solitary hours that come later.

Then it vanished. He hoped, with a passionate longing, that he might find it again, a third time. And reappear it did, though without speaking to him more clearly, bringing him, indeed, a pleasure less profound.

There are times when I stand in front of Jama Masjid and I sense a harmony in its stones. I am mystified by the elegance of its design. I think of the history of the mosque, of the years when it was being raised, when I did not exist.

Then there are times when I am in front of Jama Masjid and it remains incomprehensible to me, and I leave unmoved.

But when he returned home he felt the need of it: he was like a man into whose life a woman he has seen for a moment passing by has brought the image of a new beauty which deepens his own sensibility, although he does not even know her name or whether he will ever see her again.

It is too much.

There might be more beautiful descriptions ahead but the sentiments that have stirred inside me need not be allowed to dissolve so swiftly. I must keep them in a safe place. Tomorrow I will take them out and try to re-feel the same thoughts.

The 22nd meeting of The Delhi Proustians will take place on the graveyard behind Hazrat Nizamuddin Chilla on June 7 2012.