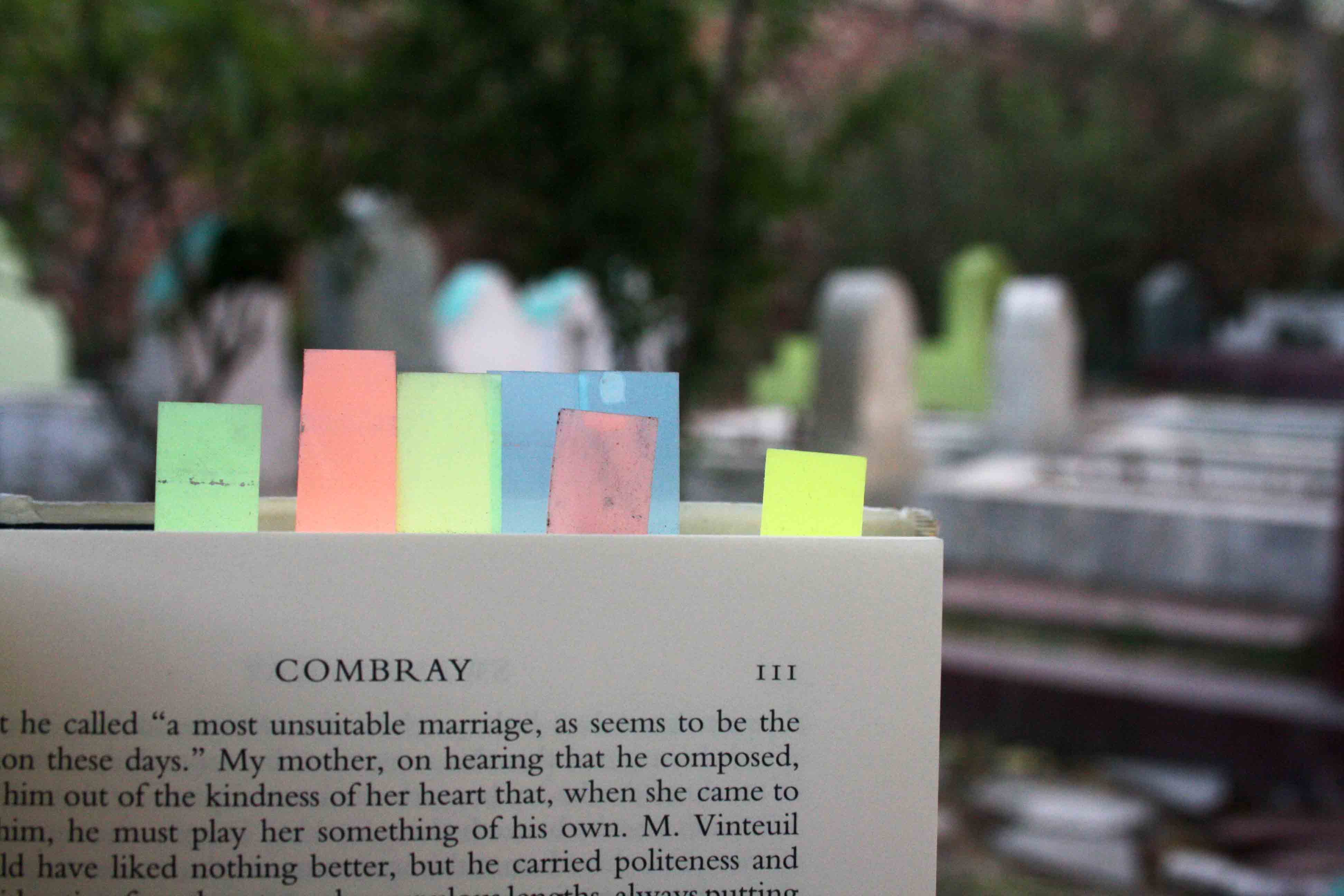 Today is the 22nd meeting of The Delhi Proustians, a club for Delhiwallas that discusses French novelist Marcel Proust. Every Monday evening for an hour we read his masterpiece, In Search of Lost Time.

It is 7 pm and The Delhi Walla is sitting in the graveyard behind the chilla of Hazrat Nizamuddin Auliya. This cluster of tombs feels as melancholic as certain passages in the Lost Time. I am on page 206 of Swann’s Way, the first of the seven volumes. This is a passage on music. Just see how Monsieur Swann is responding to it.

Indeed this passion for a phrase of music seemed, in the first few months, to be bringing into Swann’s life the possibility of a sort of rejuvenation. He had so long since ceased to direct his course towards any ideal goal, and had confined himself to the pursuit of ephemeral satisfactions, that he had come to believe, though without ever formally stating his belief even to himself, that he would remain all his life in that condition, which death alone could alter. More than this, since his mind no longer entertained any lofty ideals, he had ceased to believe in (although he could not have expressly denied) their reality. He had grown also into the habit of taking refuge in trivial considerations, which allowed him to set on one side matters of fundamental importance. Just as he had never stopped to ask himself whether he would not have done better by not going into society, knowing very well that if he had accepted an invitation he must put in an appearance, and that afterwards, if he did not actually call, he must at least leave cards upon his hostess; so in his conversation he took care never to express with any warmth a personal opinion about a thing, but instead would supply facts and details which had a value of a sort in themselves, and excused him from showing his real capacities.

I lost track mid-way in the passage and had to read again to get the meaning. Perhaps it is about how people lose their life’s passions after they absorb themselves into the mechanism of the society. But I am just guessing. That’s the fun of Proust(!)

He would be extremely precise about the recipe for a dish, the dates of a painter’s birth and death, and the titles of his works. Sometimes, in spite of himself, he would let himself go so far as to utter a criticism of a work of art, or of some one’s interpretation of life, but then he would cloak his words in a tone of irony, as though he did not altogether associate himself with what he was saying.

But now, like a confirmed invalid whom, all of a sudden, a change of air and surroundings, or a new course of treatment, or, as sometimes happens, an organic change in himself, spontaneous and unaccountable, seems to have so far recovered from his malady that he begins to envisage the possibility, hitherto beyond all hope, of starting to lead–and better late than never–a wholly different life, Swann found in himself, in the memory of the phrase that he had heard, in certain other sonatas which he had made people play over to him, to see whether he might not, perhaps, discover his phrase among them, the presence of one of those invisible realities in which he had ceased to believe, but to which, as though the music had had upon the moral barrenness from which he was suffering a sort of recreative influence, he was conscious once again of a desire, almost, indeed, of the power to consecrate his life.

Ah, a piece of music had stirred Swann into his original self. He was responding to life. He was no longer barren. He had ceased to die.

But, never having managed to find out whose work it was that he had heard played that evening, he had been unable to procure a copy, and finally had forgotten the quest.

The 23rd meeting of The Delhi Proustians will take place on 25 June 2012. The venue is to be announced later in the week.

Marcel is not buried here