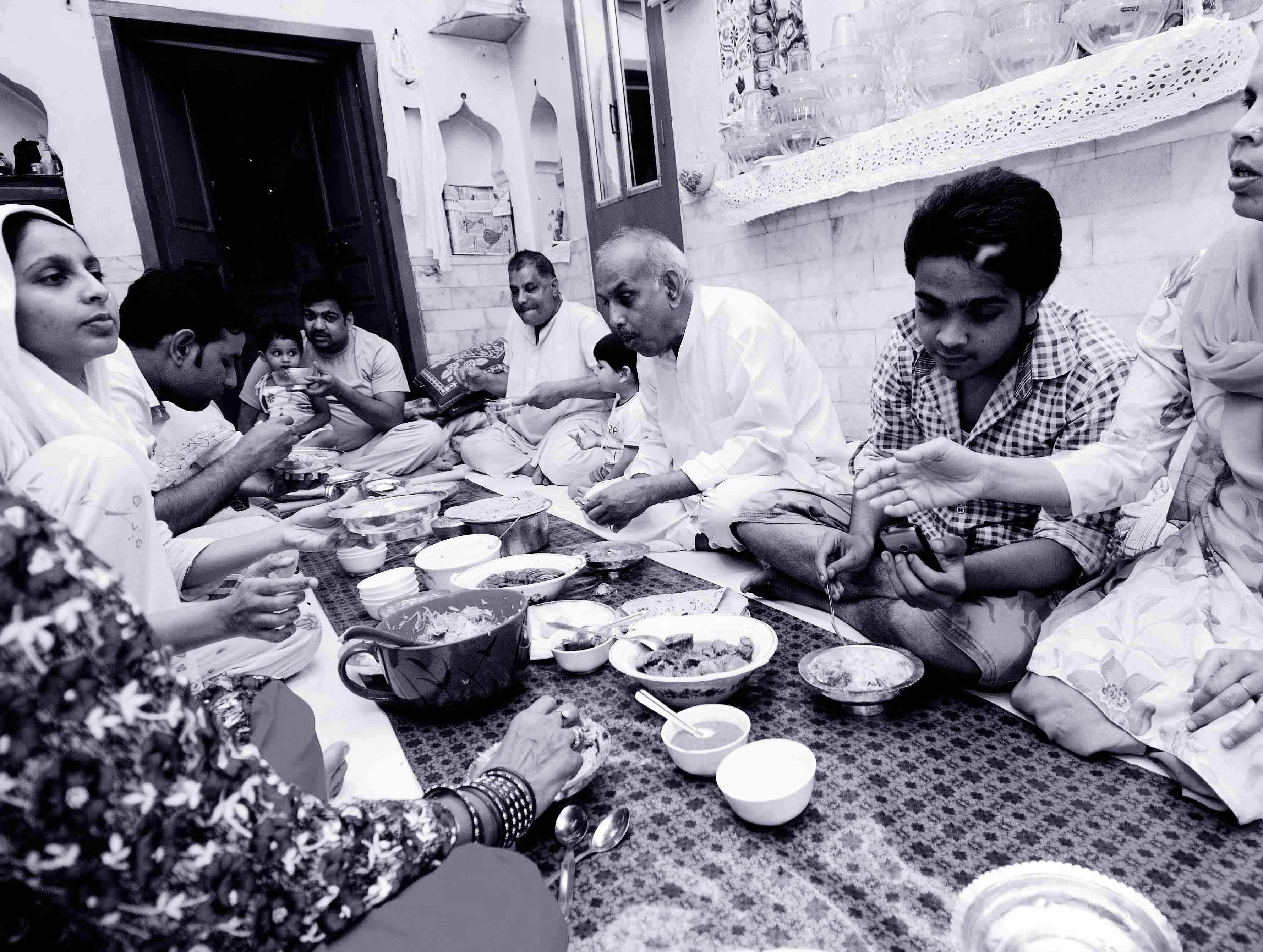 Feasting and fasting in Ramzan.

The kaleji and korma are done. The khajla has been left to soak in milk. As her daughter-in-law Sumaiya slices onions for the salad, Rashida Qureshi, 50, adds rice to yakhni. “The biryani will be ready in 15 minutes, inshallah,” she says. It is the fourth day of Ramzan, 2.30am in Old Delhi.

The most sacred in the Islamic calendar, this is the month when the Quran is believed to have been sent down from heaven and revealed to Prophet Muhammad. The 30 days that culminate in Eid are devoted to purifying the soul through prayer and abstaining from negative thoughts. It is mandatory for every Muslim who has attained puberty to observe roza, or fast, from sunrise to sunset. The fast is broken in the evening with iftar, which consists of light snacks, while sehri is the pre-dawn meal which takes its name from sahar, the Arabic word for early morning.

Rashida is preparing sehri in the marble courtyard of her home, named Aiwan-e-Taj. Her family owns one of the city’s most iconic mithai (sweet) shops. Originally selling only desi ghee, Sheeren Bhawan in Matia Mahal bazaar is famous for its claims of having invented imarti, the crusty syrup-soaked, deep-fried twirls of urad dal batter that are similar to jalebis but thicker. The shop is also known for its winter delicacy called “safed gaajar ka halwa”, for which pale yellow carrots are brought from Maharashtra.

The house, circa 1940, is a 5-minute walk from the mithai shop. Lying close to a butchery, it is situated on the top of Gosht Wali Pahari, a hill that slopes down to Chitli Qabar, Old Delhi’s only four-lane intersection. There are four generations, with 22 members, in the family. The oldest, Zahida Bi, Rashida’s mother-in-law, is 85, and the youngest, Samara, Rashida’s granddaughter, is one and a half. The house has three floors and seven rooms. The roof is home to more than a thousand pigeons. “There is also a chicken and a turtle, and a friend gave us a parrot a day ago,” says Rashida, wrapping rotis in a cloth.

Turning her focus to the food, she says: “We always lay out a complete meal in the sehri. Though the menu changes daily, khajla remains constant. First soaked in milk, its large ghee content keeps the body energized for the larger part of the day. That’s why it is a sehri staple in every household.”

In the Gulf countries, sehris are often hosted on a scale as extensive as iftars. In Old Delhi, sehri is still a family affair.

Rashida’s other daughter-in-law, Zeba, is laying out the plastic dastarkhan (dining spread) across the courtyard’s raised dalaan, or marble porch. The only part left untouched when the house was renovated in 1995, it has marble arches and red sandstone pillars painted white. A framed portrait of Mecca hangs on a wall. The dalaan is screened from the courtyard by thick plastic curtains to make it AC-enabled.

“Mark Tully (BBC’s former India correspondent) shot a documentary here and I have the CD,” says Allauddin, the stern-looking family patriarch and Rashida’s husband, as he sits cross-legged on the dalaan that is covered with a spotless white sheet. Zahida Bi, his mother, who was sleeping at one end of the dalaan wakes up to take up her position at one end of the dastarkhan. Gradually, sons and daughters-in-law and aunts and their children enter the dalaan.

While waiting for the sehri to be served, one young man is playing a video game on his mobile phone; another is checking his Facebook page. “Sometimes the men are so tired after returning from the shop that we serve them food and let them sleep,” says Rashida. “Just before 4 when the roza starts, we wake them up so that they can drink water and offer their prayers.”

This year Ramzan in Old Delhi began amid a controversy concerning the excavation of a structure at a Delhi Metro Rail Corp. site that some believe is the remnant of a Mughal-era mosque. There were tense moments on the first day of fasting. Some people clashed with the police at the site. Although the streets are filled with police constables, the area’s inhabitants are gradually succumbing to the festive spirit.

These are still the early days of Ramzan, and most residents, including the shopkeepers, are occupied with the additional prayers called taraweeh in which sections of the Quran are read every evening until the entire book has been completed. The mosques remain packed till midnight and the streets are less crowded. Most shops are closed. In other words, the bustle of a Ramzan night is yet to begin. The bazaar will come alive by midweek when most would have finished the taraweeh. It is in the final 10 days leading to Eid that shops stay open until sehri.

At the Qureshi household, the siren booms from a nearby mosque—a wake-up call for the neighbourhood, signalling that an hour is left for the roza to begin. The gravies are ladled into bowls. Helping himself to korma, Vuqas, one of Rashida’s four sons, says: “Of course, not everyone eats such rich food for sehri. There are people who prefer toast and tea at this time.”

Vaqar’s cousin Maryam, a BA (Hons) student at Delhi University’s Sri Guru Tegh Bahadur Khalsa College, says: “But despite the biryanis and kebabs in the morning, I still feel terribly hungry in the college. Then I have to exercise great self-control.”

The final course is khajla. “It’s not good today,” Rashida delivers her judgement.

After the ritual ablutions, she retires to another room in the courtyard and covers her head. In the middle of her prayers, a series of sirens sound from various mosques. The roza has begun. Outside, the lights in most houses have been turned off. The beggar on the pavement has fallen asleep. Only a cat is active, circling a discarded piece of meat.