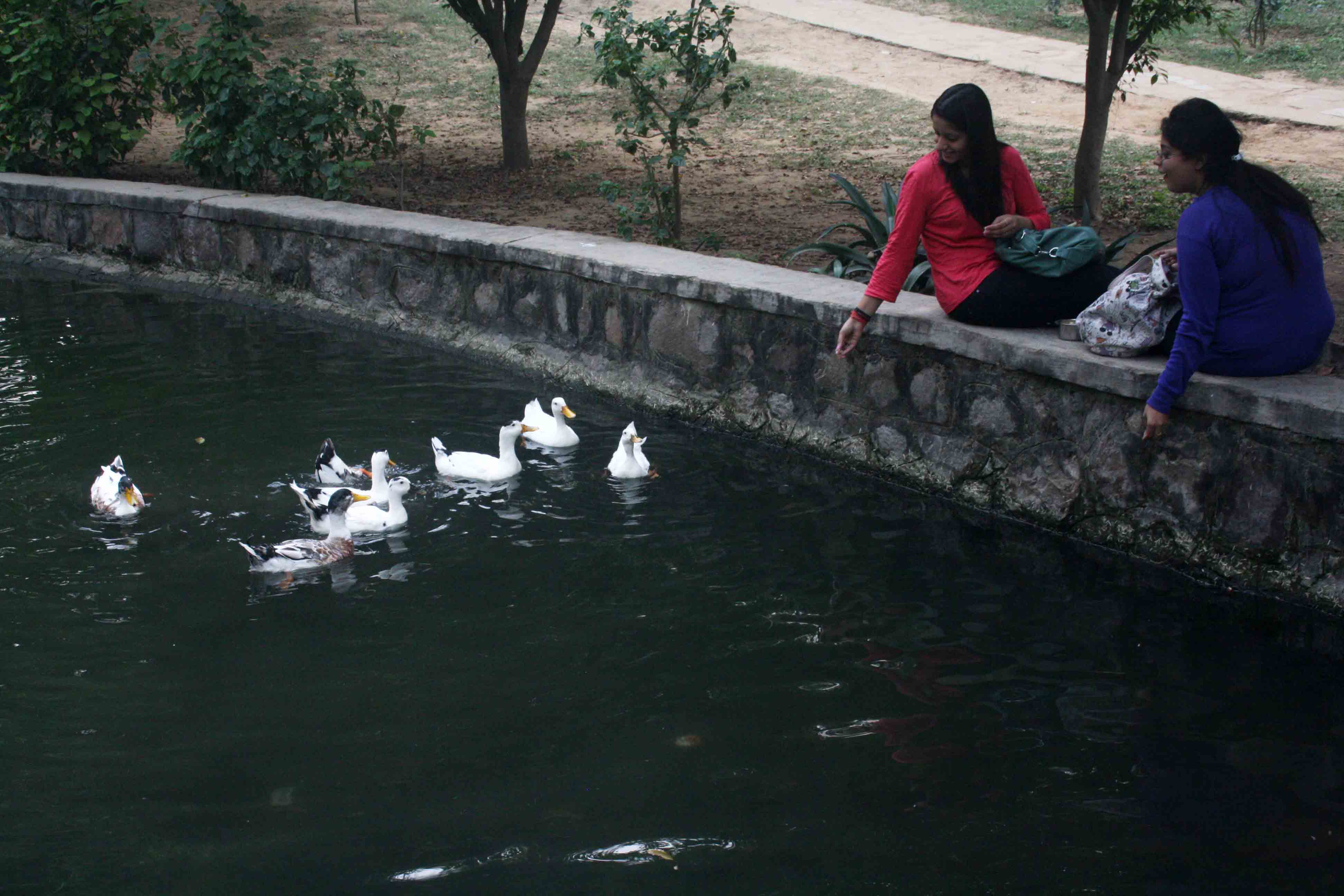 Lodhi Gardens is a land of Very Important People and very showy lovers — as any regular visitor will testify. Also, according to figures provided to The Delhi Walla by the Gardens’ authority, this 90 acres of oasis in central Delhi has 198 species of trees, 50 species of birds, 40 species of flowers, at least 30 stray dogs and — a dangerously high number of lesser bandicoot rats, or Indian mole-rats.

In October 2012 The Times of India warned the park’s regulars, saying, “Joggers will soon have to watch their step at Lodhi Gardens. For, bandicoot rats are feasting on food left behind for birds by visitors, and have dug up burrows, leaving hundreds of holes that could cause cave-ins.”

Being one of the city’s favourite landmarks, described in the book City Improbable: An Anthology of Writings on Delhi as “one of the last remaining symbols of what Delhi once was when it was at its best”, the report triggered a series of events confirming the central place of Lodhi Gardens in the idea of Dilli.

Within a week of the news report, the Delhi High Court, on its own initiative, issued notice to the Delhi Government and the New Delhi Municipal Council (NDMC), which manages the park, to file a report on the bandicoorts because of which “the soil around the trees are weakening and several trees, including a large neem and an Asoka, are standing on ground riddled with holes.”

The two-member bench also said, “We also noticed that a lot of stray dogs are found in the Lodhi Garden posing threat to the users… the respondents are directed to take immediate action to catch and remove the stray dogs.”

The repercussions were immediate. The Lodhi Garden Dog Protectors was formed on Facebook, while Maneka Gandhi and several other animal rights activists and groups succeeded in getting a stay order from the court, thus ensuring a breather for the canines.

When I visited the Gardens in late October, the animal world appeared to be at peace. A stray dog dozed off on a 16th century stone bridge, three ducks peddled quietly in the pond below, a squirrel raced up a floss-silk tree, and a great number of other birds chirped.

Originally the site of a village called Khairpur, Lodhi Gardens turned 75 years old in 2011. It was landscaped around the tombs of the Sayyid and Lodhi rulers and was named after Lady Willingdon, the then British viceroy’s wife. Today, its character is superior to that of other parks in the capital.

“Lodhi Gardens is like a durbar,” says Ranjana Sengupta, author of Delhi Metropolitan: The Making of an Unlikely City. “Ministers and bureaucrats, who live in the coveted government colonies that abut the park, walk with their close confidants (rarely wives) acknowledging the salutations of others who are, in comparison, less well-connected.”

Congress leader Rahul Gandhi has been frequently spotted jogging in Lodhi Gardens. Minister of state of environment and forests Jairam Ramesh is a daily sight. Cricketer Ajay Jadeja was seen with his wife and son.

The park has been celebrated in arts and literature. In Yash Chopra’s film Silsila, Amitabh Bachchan had midnight walks with Rekha in Lodhi Gardens. Nobel laureate Octavio Paz, who lived in Delhi in the 1960s as Mexico’s ambassador, composed a poem called ‘In the Lodhi Gardens’.

In 2010, the park appeared on the cover of Khushwant Singh’s novel The Sunset Club. The first chapter was titled ‘Lodhi Gardens’.

Of course, yoga groups, children from nearby government schools, picnicking families and lovers in search of privacy – all the usual denizens of Delhi’s parks – also flock to Lodhi Gardens.

“But its proximity to upper-crust residential colonies, both government and private, to the cultural-social hubs of the India international Centre (IIC) and India Habitat Centre (IHC), and to the commercial and social prominence of its neighbour Khan Market have contributed in making the Lodhi Gardens Delhi’s most cosseted public space inspiring a near reverential loyalty from its regulars,” says Ms Sengupta. “Some social observers claim that expressing admiration for the Gardens is a way of indicating several ideological positions simultaneously: these include a knowledge of India’s glorious past, a love of nature, and a familiarity with established cultured spaces such as the IIC library, Khan Market bookshops and IHC’s art galleries.”

Can the mole-rats destroy the foundation of this paradise?

“The rats were always here,” says Jitendra Kaushik, the Gardens’ assistant director, “but they have increased exponentially in the last two years along with a rise in the tendency of the visitors to throw grain for the birds. These rats burrow tunnels, loosen the roots of trees and harm the flora. We recently barricaded a hillock because it was studded with rat holes.”

The park’s guards have been asked to warn the visitors not to throw grain to birds but they are often snubbed with rude responses.

“These mole-rats have been there for as long as I can remember,” says Pradip Krishen, the author of Trees of Delhi: A Field Guide, who has also written a booklet on Lodhi Gardens’ trees. “Sure, they make extensive underground galleries but in the process they’re probably turning the soil and aerating it. As burrowing creatures that like soft, moist earth, they have found an ideal habitat in Lodhi Gardens.”

Indeed, Lodhi Gardens is a rare space in Delhi that has become home to a wide range of life – from flowers, trees, birds, butterflies (there’s a butterfly park), fish, and dogs, to politicians, bureaucrats, ambassadors, industrialists, novelists, columnists, loners, lovers, tourists and hawkers. (All day long the sellers of ram laddoos and churmure are seen crisscrossing the Gardens.)

The proposed move to remove the stray dogs from the park was seen by some as a threat to this precious eco-system.

“This is not just about the stray dogs in Lodhi Gardens, but about Indian attitudes to stray dogs and animals in general,” says Nilanjana Roy, whose novel The Wildings is about the adventures of stray cats in Nizamuddin. “The idea that our urban haunts need to be ‘sanitized’ of their original occupants is a new and very cruel one; ‘relocating’ animals, especially ones as gentle as the dogs I’ve met in Lodhi Gardens, is a euphemism for evicting them from the places they’ve grown up in and know as home.”

A security guard in the park says on condition of anonymity that it is the pedigreed pets of the neighbouring Amrita Shergill Marg and Jor Bagh, not the stray dogs, who hijack the jogging track and fight with the strays, who rarely block the walking paths.

“We have to see where our fear stems from,” says Ms Roy. “where we develop the arrogance that says, this city is only for humans, and that too, only for humans who have privilege.”

“We receive more than 10,000 footfalls daily,” says Mr Kaushik, “Now, the heat is over and the numbers are set to swell.”

Ms Roy, the chronicler of Nizamuddin’s felines, is not interested in the two-legged visitors. “If my next novel were to be set in Lodhi Gardens,” she says, “the heroes would be the dogs, the grey hornbills, the ducks, and the migratory visitors to the pond.”

“They already have a sinister underground system,” she says. “The poor things would be the villains.”