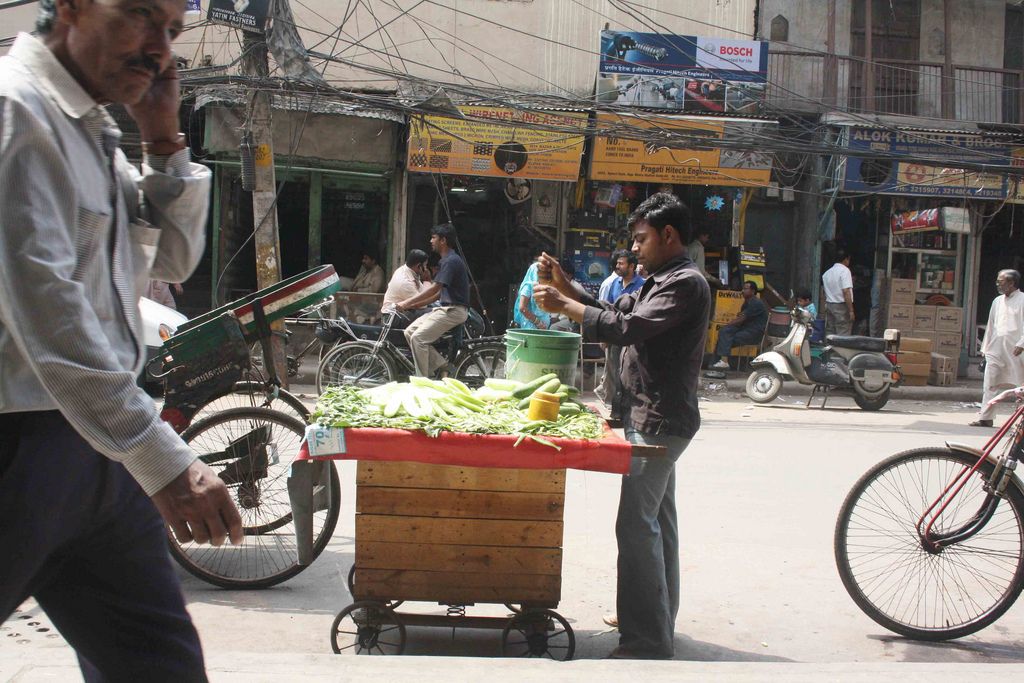 The god of small sellers.

For this hawker of mouth fresheners, her world is a tiny portion of the pavement in the capital’s Prabhu Market near central Delhi’s Sewa Nagar railway crossing. The property was passed down to 62-year-old Shanti from her husband, a vegetable vendor, who made it the site of his commerce in 1965. He died a decade ago. Ms Shanti’s two sons are also dead. Her assets consist only of a straw basket partially filled with sachets of Pass Pass and Satmola.

Earning no more than about Rs 25 daily, Ms Shanti does not have the licence to hawk on this pavement or anywhere else. She has no document to prove that her relationship with this piece of land goes back nearly 50 years. She can be evicted any time and no law will be broken.

Ms Shanti’s risk-filled days may soon end. Introduced in Parliament’s monsoon session in 2012, the Street Vendors (Protection of Livelihood and Regulation of Street Vending) Bill, 2012, has the potential to regulate urban street vending and ensure a standardized legal frame to protect the rights and social security of street vendors.

“Until now urban street vending was seen as a nuisance that needed to be regulated and not as an important source of livelihood to the very poor and of inexpensive retailing to middle-class consumers,” says activist Harsh Mander. “This Bill reflects a change in the perception of the government.”

If enacted, it may improve the lives of 10 million people. That is the number of street vendors in India, according to the ministry of housing and urban poverty alleviation which drafted the Bill. The ministry’s website shows that Bombay has the largest number of vendors, at 250,000, Delhi has 200,000, Kolkata, more than 150,000, and Ahmedabad, 100,000.

Weighed down by a life of hard work and meagre income, many street vendors are migrants displaced by the destitution of their native area. Fleeing from the poverty of their villages, they make their homes in the shanties of cities and earn a living by selling their wares on pavements. Frequent targets of harassment and extortion by police and municipal officials, often evicted without prior notice from the place where they have been hawking for years, they are occasionally seen as eyesores by ambitious town planners, particularly so when cities wish to beautify themselves into world-class cities.

Exactly this happened in Delhi in 2010, a few months before the Commonwealth Games, when the authorities banished stray dogs, beggars and vendors from the Capital’s streets.

Ms Shanti was one of them. The market where she operates dates to the 1960s and most vendors there were granted licences to set up booths following a Supreme Court directive in 2001. Yet in 2010, citing security concerns for the Commonwealth Games, the vendors were asked to temporarily shut down stalls. A year later, the Municipal Corporation of Delhi (MCD) demolished the market, offering them another site on the city’s outskirts.

It was the Delhi-based National Association of Street Vendors of India (Nasvi), a federation of 715 street vendor organizations, trade unions and non-governmental organizations (NGOs), which helped Prabhu Market’s vendors put up effective resistance. It organized them into a registered body called Footpath Vikreta Ekta Manch in 2011 and introduced the vendors to lawyer-activist Prashant Bhushan who, along with Nasvi’s lawyer, presented their case in the Delhi high court for free. In May 2011, the court ordered that vendors could not be removed from the Sewa Nagar crossing till the disposal of their petitions.

“If the authorities have valid reasons to evict an area, they have to provide vendors an alternative space that maintains their pre-eviction livelihood level,” says Arbind Singh, Nasvi coordinator. With more than 300,000 members across 23 states, Nasvi, along with other organizations, ran a sustained campaign to force the government to draft the Bill.

“The provisions in the Street Vendors Bill will prevent repetitions of the Prabhu Market incident,” says Mr Singh, pointing out its path-breaking features. “All the vendors will be registered. Once they receive licences, the police cannot trouble them. Mandatory vending zones will be set up in every city. If we give the vendors a level playing field, they will offer improved services and be able to coexist with supermarkets and malls.”

“My concern is that everything in the Bill is left to the schemes of the individual municipalities of different states, which defeats the purpose of a Central legislation,” says Sharit Bhowmik, professor and chairperson of the Centre for Labour Studies at Mumbai’s Tata Institute of Social Sciences. “Instead of facilitating vendors, the schemes could be influenced by vested interests from various bodies, such as the area’s resident welfare societies, which are increasingly deciding how public areas must be used.”

The struggle for the legal rights of India’s urban street vendors is very recent. The national policy to provide a supportive environment for street vendors was adopted by the Union government in 2004. Since the policy was not legally binding, several municipal bodies in various states chose to ignore it. The policy was revised and upheld by the Union government in 2009; the same year, it brought in the Model Street Vendors Bill, following which a number of activist groups, including Nasvi, demanded a Central law that would remove legal ambiguities and have overriding reach.

The same period saw a rise in activism among vendors. Small groups were formed in various cities. “In Delhi alone, there are about 50 such organizations,” says Anuradha Singh, Nasvi programme coordinator, who manages Delhi, Madhya Pradesh and Chhattisgarh.

Apart from dealing with individual vendor problems, especially in confrontations with the local authorities, these groups pool in money for emergencies, help provide members access to government programmes and resources, and facilitate steps to ease working conditions. Prabhu Market’s Footpath Vikreta Ekta Manch, for instance, introduced 34 solar lamps in August to light up the area at night.

When asked what the Bill means to her, Ms Shanti says, “If it becomes a law, I will still be poor.” On further prodding, she says hesitantly, “I’m told I will no longer be harassed by the police and the MCD. Then I will no longer feel scared.”