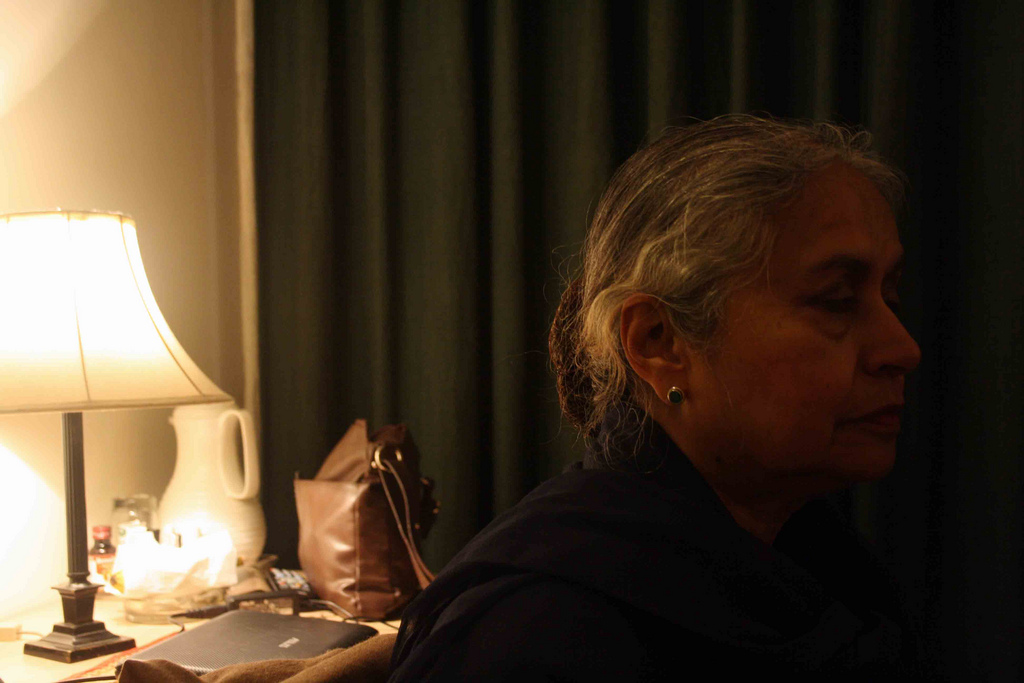 Settling down at the table by the window, she says, “I will take the grilled fish. At my age, one needs to be figure-concious.” The Delhi Walla meets Naz Ikramullah in the elite India International Centre (IIC). We are at the dining hall. “But you must try their excellent potato soup,” she says. “I had it in the afternoon when *** came for lunch. Oh, she’s such a lovely soul. Last year when I was staying in IIC, I ordered the Mulligatawny at every meal… Did you read that book by ****… I was outraged and immediately fired off a mail… ”

Ms Ikaramullah is an artist in her seventies. Trained in lithography, her work is displayed across galleries in Amman, Bombay, Islamabad, Ottawa and Washington DC. She herself divides her time between Karachi (winter) and Ottawa (summer), that is if she is not holidaying in Delhi, Dhaka or London.

“But Delhi is my city,” she says. “I spent my childhood here… No, I insist, you should order something more, and something with gravy also… What, you are not serving arhal dal today? Very sad… ”

Ms Ikramullah’s father was Pakistan’s first foreign secretary. Her mother, an ambassador, was posthumously honored with Nishan-i-Imtiaz, the nation’s highest civilian award. One of her uncles was Pakistan’s Prime Minister; the other was India’s Vice-President. Her sister is married to a senior prince in the royal family of Jordan.

In Delhi, Ms Ikramullah’s parents moved amongst the history makers. (Once her brother told the writer, “Mr Jinnah, you produce such good articles in Dawn.”)

After partition, her parents migrated and Ms Ikramullah became a resident of Pakistan. She lived in Paris in the early 1950s when her father served as ambassador to France. “We had a house in the 16th arrondissement. It was near Beckett’s tomb. When I took my pony rides, the locals would point me out as Le Mademoiselle de Pakistan.”

In the years following her marriage, Ms Ikramullah settled in Canada, now home to her daughter and family.

After the waiter leaves us with steamed ginger cake (my order) and jaggery ice cream (hers), upon my request, Ms Ikramullah lays out her family tree – mother from what is now Bangladesh, father from somewhere in United Provinces, one nephew married into a Jain family in Bombay, son-in-law a Pakistani Punjabi… now I hear her saying, “… My Bangladeshi nephew has talked of marrying his Nepali girl friend in Phuket… Shall we have coffee? Of course, you may ask for Darjeeling… ”

I lose track of our conversation, only hearing strings of her sentences, “… My grandfather’s school in Benares… I had tears when I cleaned the grave of my phoofi in Calcutta… I’m not going to Jaipur this year… I hope my friend *** will get a visa for Karachi… They are having a literature festival in *** too… What a joke!”

In Delhi, Ms Ikramullah, an IIC member, always stays in residence. The rooms have hotel-like comfort. The staff know her, and she is always eager to get updates on wives, children and marriages of their distant cousins. Otherwise her days in the capital are spent visiting art galleries and bookstores. She catches up with friends at their homes in Shanti Niketan, Maharni Bagh, Nizamuddin East and Amrita Shergill Marg, or call them to dine with her in IIC.

Finding a place for her eye-glasses on the bridge of her nose, Ms Ikramullah surveys the diners, scanning for familiar faces. “I left Ottawa in mid-November. First, I went to London to visit my sister. I topped up my Oyster to go to all the exhibitions and concerts. I also met *** in a restaurant just outside the Tate. In Karachi, I spent a week meeting the relatives of friends who died in the past year. I also saw Aamir Khan’s Talaash. The theater was packed except for the last two rows. Then I flew to Bombay and went to Ajanta and Ellora. Oh, the paintings inside those caves. I was moved to tears. The hotel at Aurangabad, by the way, was very charming. The owner, I think, was formerly employed at the Taj.”

As I escort her to her room, Ms Ikramullah says, “Last week I was in Lucknow to meet a dear friend. It was freezing and there were power cuts and my friend had an ear-infection. I feared she was suffering from vertigo… ”

Now seated at her writing table, Ms Ikramullah points to her mouse-pad that depicts Krishna with his lady friends. “Isn’t it lovely?”

Flipping through a small-sized family photo album that she always carries on journeys, Ms Ikramullah stops at a black and white picture. “My mother,” she says. “It was taken in Paris. I haven’t been there since we left in the 50s. They say that the city has been cleaned up. Now it must look like a pretty painting. But I really want to go to Istanbul. No, I will never go to Saudi Arabia until it is ruled by the Wahabis. Look, what they have done to Mecca! But first I must visit Hampi. Do you know where it is? A friend says the ruins are lovely. I have called her for lunch tomorrow. What! You are leaving! So soon! I will let you know if I have an open evening in the days ahead. Otherwise, I shall see you next year when I return to Delhi. No, I must escort you outside… Rubbish… So what if it’s cold… I have to make sure you don’t come back… What, you are only wearing such a thin jacket… Take this shawl… What rubbish, I insist… ”

[This is the 68th portrait of Mission Delhi project]

The zest for life