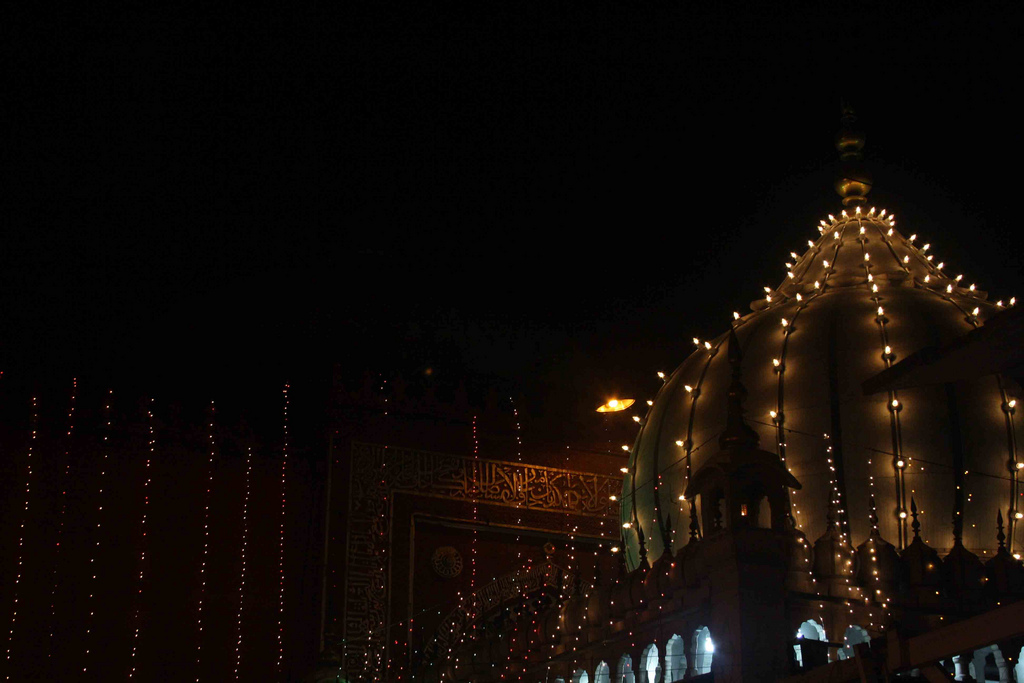 The long night of Sufi songs.

The Ghusal Sharif, or birth celebrations, of Hazrat Nizamuddin Auliya, the 14th century Sufi saint, was held on the night of January 8 2013. It took place in the courtyard of his dargah in central Delhi’s Hazrat Nizamuddin Basti, a historic village that also houses a Jahangir-era monument called Chausath Khamba and the grave of Urdu poet Mirza Ghalib.

Hazrat Nizamuddin was born to Bibi Zulaikha in Badaun, a town in Uttar Pradesh. His mother’s tomb is in Adhchini village, near the Indian Institute of Technology, Delhi, and is popularly known as Mai Sahiba ki Dargah.

As in previous years, the shrine’s courtyard played host to a night-long sitting of qawwali, Islam’s sacred Sufi music offered in the shrines of the subcontinent. The marble floor was covered with carpets. The pillars and walls were decked with bouquets made of roses, marigolds and chamelis. Candles were placed at strategic locations. A coffee machine was set up beside an unknown tomb. A cooking gas cylinder and a stove was seen inside the tomb-chamber of Mughal emperor Muhammed Shah Rangila. The walls in the principal shrine, the site of Hazrat Nizamuddin’s grave, were draped with gold-laced green curtains. The tomb had already been lit with dozens of electric lamps.

“Despite the freezing temperatures, hundreds of people stayed the entire night in the dargah,” says Farid Nizami, a dargah khadim, a traditional caretaker. “They all wished to be blessed on this special night.”

“For the whole night, we sang the kalaams (verses) of Khusro,” says Chand Nizami, a qawwal who is recognized by many following his appearance in the Ranbir Kapoor-starrer Rockstar in 2011. He is referring to poet Amir Khusro, whose tomb is in the dargah.

Khusro is a significant figure in Delhi’s history, and an appreciation of his life and works not only helps us understand the city but also the literary and cultural life of 14th century Hindustan.

In her The Book of Nizamuddin Aulia, Vienna-based author Mehru Jaffer writes: “Khusro composed verses in both Persian and the local dialect of Brij Bhasha. By doing so, he laid the nucleus of Urdu poetry.” Describing him as a businessman, poet, musician, scholar and swordsman, Ms Jaffer writes: “The prolific Khusro published his first volume of poems before he turned twenty. He wrote panegyrics on seven successive kings of Delhi, introducing a new genre in poetry, that of the historical epic. Khusro also introduced a novel strain into the existing Persian tradition of poetic forms of the masnavi by recounting certain events of his own time in long poems. His style of lyrical poetry and ghazals contains many elements that in the sixteenth and seventeenth centuries were to become characteristic of the Indian style.”

“We qawwals cannot cover the vast range of Khusro’s poetry (that celebrates his love for Hazrat Nizamuddin) in a single night,” says Meraj Ahmed Nizami, one of the few classical qawwals left in India, “but you do get an idea of his world through some of those compositions, and even if you cannot understand the verses in their entirety, you certainly get a feel of them.”

Since he is not in the best of health, Meraj Ahmed Nizami, now in his 80s, who has been performing at the Nizamuddin dargah for more than 50 years, stayed away from the celebrations.

As always, the night witnessed a substantial number of qawwali lovers, but most attendees were Hazrat Nizamuddin’s devotees, some of whom wear pointed caps in yellow, which is believed to have been Nizamuddin’s favourite colour.

Sweet rice was served to all.

The evening started at 11pm, when the dargah’s 30 qawwals, from across Delhi, settled down with their harmoniums and dholaks. There was a short break at 2am, when Hazrat Nizamuddin’s tomb was washed with rose water in a ritual called Ghusal. The celebrations ended with fajr, the morning prayer.