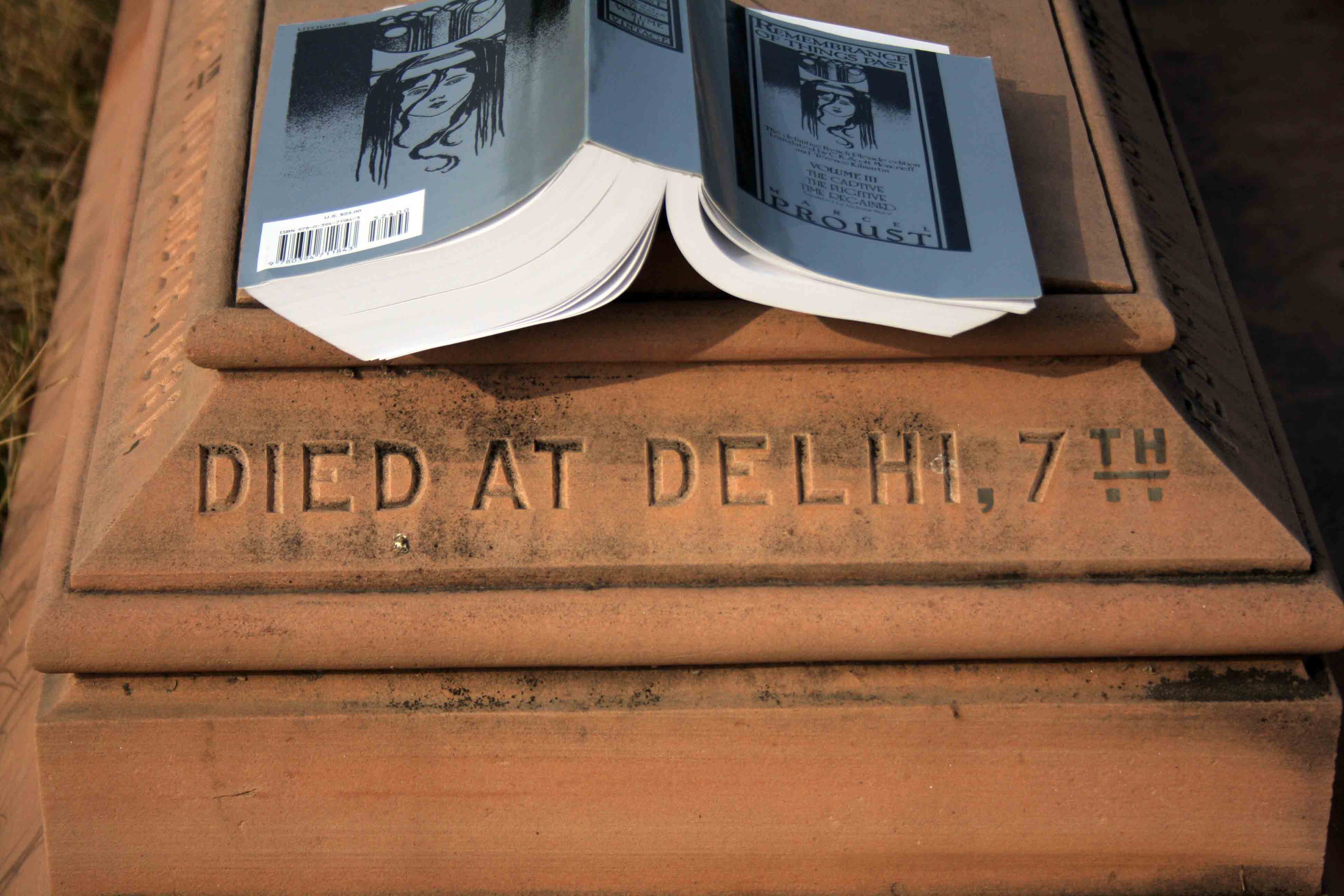 Today is the 36th meeting of The Delhi Proustians, a club for Delhiwallas that discusses French novelist Marcel Proust. Every Monday evening for an hour we read his masterpiece, In Search of Lost Time, a multi-volume novel sometimes also known as Remembrance of Things Past.

It is 7 pm and The Delhi Walla is in the British-era Nicholson Cemetery. It takes its name from the grave of Brigadier General John Nicholson, an Irish army officer in the British East India Company, who died of wounds received during the uprising of 1857. Most graves date from that year.

We Proustians are meeting after a gap of few weeks.

Surrounded by the dead, I want to read a passage from Cities of the Plain, the fourth volume. Marcel is in Grand Hotel. It is in Balbec, a seaside resort. Years ago when his grandmother was dying and Marcel was unaware of the extent of her ill health, they both had come to visit Balbec and had stayed in the same hotel. The young Marcel’s room was divided from his grandmother’s by a thin wall so that he could knock at it to summon her if he felt unwell.

Tonight, Marcel, who did not suffer greatly when his grandmother died, is suddenly overcome by grief. As he bends down to take off his boots, his chest swells up with melancholy; his being is shaken with sobs and tears stream from his eyes.

So as not to see anything any more, I turned towards the wall, but alas, what was now facing me was that partition which used to serve us as a morning messenger, that partition which, as responsive as a violin in rendering every nuance of a feeling, reported so exactly to my grandmother my fear at once of waking her and, if she were already awake, of not being heard by her and so of her not coming, then immediately, like a second instrument taking up the melody, informing me of her coming and bidding me be calm. I dared not put out my hand to that wall, any more than to a piano on which my grandmother had been playing and which still vibrated from her touch. I knew that I might knock now, even louder, that nothing would wake her any more, that I should hear no response, that my grandmother would never come again. And I asked nothing more of God, if a paradise exists, than to be able, there, to knock on that wall with the three little raps which my grandmother would recognize among a thousand, and to which she would give those answering knocks which meant: “Don’t fuss, little mouse, I know you’re impatient, but I’m coming,” and that he would let me stay with her throughout eternity, which would not be too long for the two of us.”

It is January 2013. The next month is special. Swann’s Way, the first volume that includes the novel’s famous Madeline scene, will celebrate its 100th anniversary in February 2013. It was published as Du côté de chez Swann by the Grasset publishing house. Proust himself paid for the publication.

In other words: On the hundredth year of In Search of Lost Time, I am destined to finish all its seven volumes.

Yesterday I completed the fourth volume. Now, I will start the fifth: The Captive. But first, some New Year resolutions:
1. Proust will always remain in my rucksack
2. Even after completing In Search of Lost Time, I will never stop reading Marcel
3. This club is to be turned into an exhaustive guide to the world of Proust (his works and his life)
4. From next meeting onwards, I will make a new beginning in terms of how best to make use of this precious hour

In Proust we trust.

The 37th meeting of The Delhi Proustians takes place on 28 January 2013.