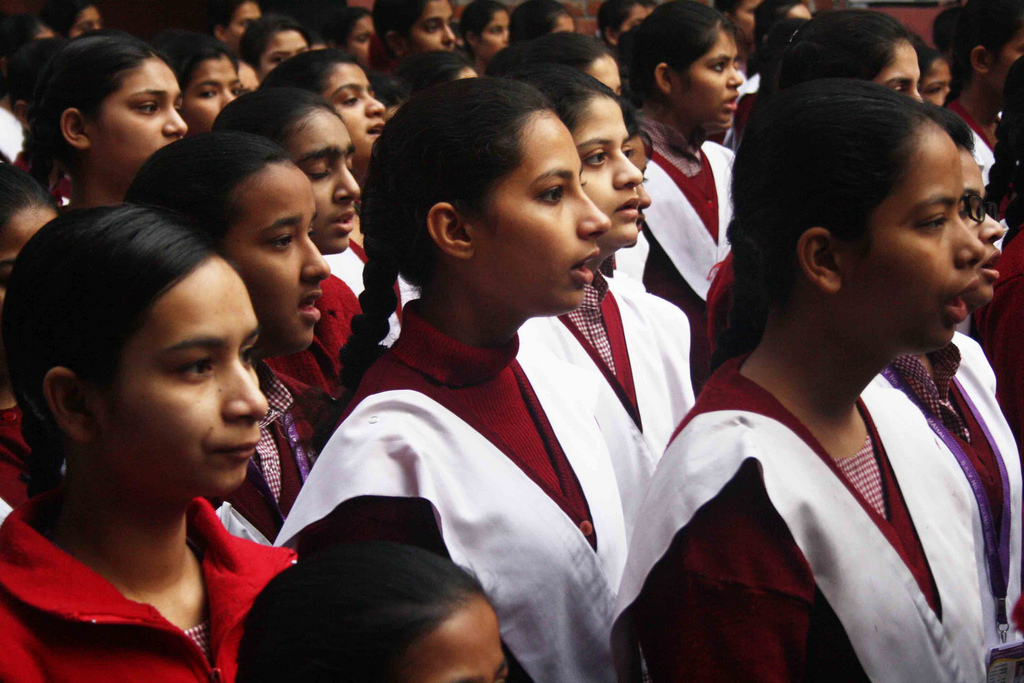 A cat’s drawn-out meow cuts through the squawking of chickens. These sounds, typical of Old Delhi, recede as the empty yard fills. The morning assembly at Sarvodaya Kanya Vidyalaya (SKV) school No. 2, Zeenat Mahal, Lal Kuan, begins with a drumbeat.

In January 2013, the girls-only school made a fleeting appearance in a leading daily when it was selected for the annual Times of India Social Impact Award—because it “had gone from being one of the worst government schools not long ago to achieving 100% pass results for the last five years”.

All the 1,246 students are Muslim and come from the Walled City. This Urdu-medium school not only mirrors the academic merits of its students but is also a portrait of the locality in which it is situated.

Like a bubble of tranquillity in the congested Lal Kuan Bazaar, SKV is nestled among kite shops, biryani stalls, serene mosques and crumbling houses with latticed windows and wrought-iron balconies. As one of the 719 schools run by the Delhi government, it charges no fee.

The yard is paved with grey tiles. A kota stone platform is built on one side, a row of flowerpots arranged on the other. The principal’s spacious office is reached via a roomy corridor. The painted portraits of Mughal emperor Bahadur Shah Zafar and his much younger queen Zeenat Mahal provide a clue to the school’s history. More than a century old, it moved to its present site in 1950 to occupy the remnants of Zeenat Mahal’s dilapidated mansion (actually, nothing is left of it except the two arched gates).

Principal Chitra Gupta, 54, commutes daily by Metro from Old Rajinder Nagar to Chawri Bazaar. She does not give off the vibe of a tyrant—she uses the intimate beta in her interaction with students. “When I arrived in 2007,” she says, “the teachers were demotivated and the girls lacked confidence. That year, only 50% of our students had passed the 10th standard board exams and 61% cleared the 12th.”

The very next year, the success rate at both levels increased to 100%. In 2010, this SKV became No. 1 among the city’s government-run schools in terms of the quality index, the average marks obtained by each student.

“The magical turnaround happened,” says Ms Gupta, “after we looked into the root cause of the problem.”

That was the touristy Old Delhi itself. Blinded by Jama Masjid, Karim restaurant, Ghalib’s haveli, and a kaleidoscopic street life, visitors to this part of the Capital fail to notice its underbelly, the daily lives of its residents. Almost all the girls at SKV, according to the principal, come from conservative families, many of whom put little premium on education, especially for the girl child. The fathers are daily wagers, patri (footpath) vendors, Zardozi workers and kite makers. The mothers are housewives. Most homes consist of just a single room. The residents sleep in shifts. Tuberculosis is rampant.

Ms Gupta got strict about attendance and teachers too were asked to take classes regularly. “The school suffered from a regular pattern of absenteeism,” says Ms Gupta. “One girl, for instance, constantly stayed away on Mondays. I discovered that she had TB and was visiting a distant government health centre every Monday to get her DOTS (the World Health Organization-recommended tuberculosis control programme) pill.” After a number of students disclosed similar stories to her, Ms Gupta persuaded a health centre very close to the school to take charge of her student-patients.

For the girls, the assembly ground and the window-lined classes are an oasis of air and sky, something that is in short supply in Old Delhi. “In the recess, I sit in the yard and enjoy the winter sun,” says the soft-spoken Sofia, a class XII student who lives with her parents and five siblings in a one-room house in Farash Khana, a neighbourhood that derives its name from the masons who were brought to Delhi to lay tiles on the farsh (floors) of Shahjahan’s Red Fort. Squinting at the sun, Sofia, her hair braided with a red ribbon, says, “It is impossible to study in my overcrowded and airless home.”

The students preparing for Board exams are encouraged to use the empty classrooms during school holidays. Otherwise, since the Vidyalaya has two shifts and the classrooms remain occupied through the day, those wishing to study extra hours do so in the principal’s office.

But there is a world beyond Zeenat Mahal, beyond Turkman Gate, beyond Dilli Gate. Ms Gupta faced stiff resistance when she tried to send girls to inter-school competitions, for which they would have to commute to schools in Karol Bagh and Rohini. Nevertheless, as more and more students won prizes, including cash rewards, parental opposition subsided to a point where they even let their daughters go on outstation tours. “Our class went to Amritsar and Dalhousie in 2011,” says Nazreen, a class XII student who lives in Lal Kuan. “It was the first time that I left Dilli-6 (Old Delhi’s postal code) without my parents.” Her classmate Ilma adds in a mischievous tone, “Nazreen always scored good marks but rarely uttered a word; now she is a chatterbox.”

Singing Vande Mataram is part of the assembly tradition at all state-run schools in Delhi but, owing to the reservations of some Muslims, the SKV in Zeenat Mahal had always shied away from it. Ms Gupta delicately explained to the girls—and their parents—that the national song is about performing an adaab (salute) to the ammi (mother). The objections to yoga—some parents said it was a thing Hindus do—were tackled by explaining the health benefits of deep breathing.

“It’s not about Hindus and Muslims,” says Nahid Aslam, a teacher known for her extreme kindness and nicknamed Hamdard Dawakhana, a popular dispensary in the area that once housed the bottling factory of Rooh Afza. “A child should be informed about the wider world, of which she is a part,” she says.

The story of Zeenat Mahal, on the other hand, lacks detail in our schoolbooks. The wife of the last Mughal emperor of India, who became the figurehead of the country’s first revolt for independence, the uprising of 1857, she is charged with secretly corresponding with the British and has since been dismissed with an unflattering footnote in history. However, the new uprising taking place in her former residence could redeem her reputation more convincingly than any sympathetic historian.