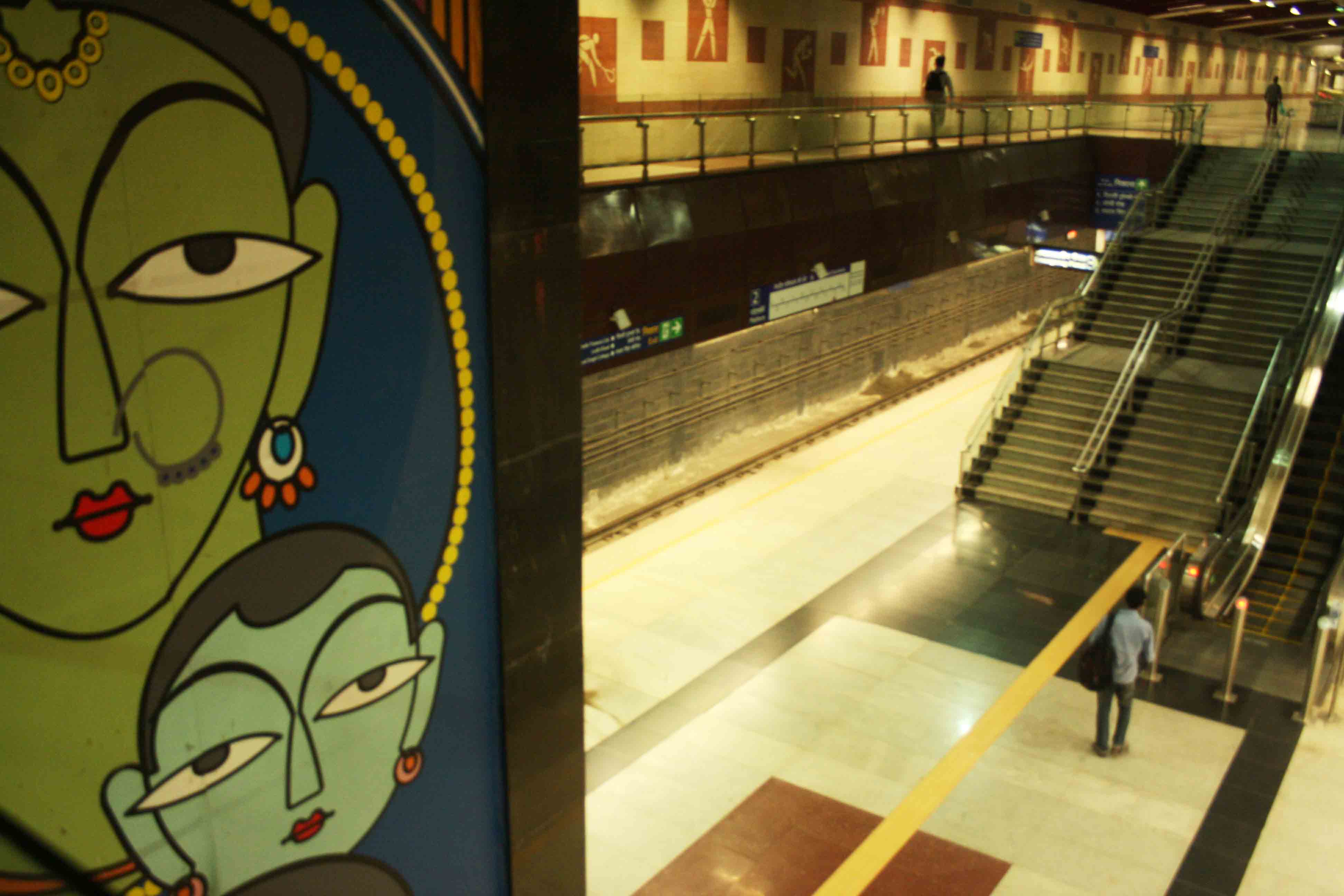 Ghost of the games.

It is 10 years since Delhi Metro Rail Corp. (DMRC) ran its first train. Most Delhiwallas have grown to think of Metro stations as places to push each other into rail coaches. The Jawaharlal Nehru (JLN) Stadium station in central Delhi is different.

A cynic might mock it as a symbol of world-class Delhi. A diehard optimist might plug it as the perfect getaway from the pushy Delhiite. “Not many people come here,” says a guard. “It doesn’t see much crowd,” says the clerk at the token counter.

But the station has been designed to handle great crowds. As seen on a display board:

Extra-large staircases have been provided at all the five entry points for the smooth movement of the commuters. While the staircases at other stations are 2.4 metres wide, here the stairs are 4.25 metres wide.

The station has 20 Automatic Fare Collection (AFC) gates, instead of the usual eight. The concourse, or central area, is spread over 6,400 sq. ft—one of the largest in the Metro network. According to the DMRC, the station can handle 4,000 passengers a minute during peak time and a traffic flow of 80,000 per hour, with a platform area of 1,800 sq. m. There are nine escalators, five gates, and a toilet—a luxury missing in most stations.

But where’s the great crowd?

The Metro station was opened on the morning of the inauguration of the Delhi Commonwealth Games in October 2010. The ceremony was staged in the stadium adjacent to the station. According to figures then shared by the DMRC, the station got 20,000 visitors on the first day and 45,000 commuters during the Games’ opening and closing ceremonies.

This weekday afternoon, however, there is barely a soul to be seen other than the Central Industrial Security Force guards. The concourse is empty. An ATM, installed a year ago, remains inoperative. No one is present to admire the artwork on the 163m-long walls on both sides. It was especially designed, as a display board states, “to enhance the zeal of the Games”: Athletes are shown weightlifting, wrestling, swimming, cycling, practising archery, playing table tennis, basketball, badminton and tennis.

According to the DMRC, the Metro ferries two million passengers daily in 2,800 trips covering 70,000km. Early in 2013, it carried 2.3 million commuters in a single day, a record. However, the violet line—one of the six routes in the network—which runs through the JLN Stadium station stands out like a sore thumb. In February, The Indian Express reported that the 20km- long corridor connecting the babu zone of Central Secretariat to rural Badarpur in the south carries a mere 145,000 travellers each day. This figure is 10 times lower than the other Metro lines, save one (the green line carries 70,000 passengers daily). The report added that the Union ministry of urban development has asked for a study to pinpoint the reasons for the low numbers.

What will the study make of the JLN Stadium station?

“The Commonwealth Games were a prime catalyst to build the station,” says Anuj Dayal, spokesperson, DMRC, “but urban infrastructure projects aim long term and are planned after a detailed project report which considers technical and economic considerations. It is not unusual to have some stations extremely crowded while some with lesser traffic pick up as the rail network progresses.”

Situated off Lodhi Road, the station is tucked between the Central Government Offices (CGO) Complex and Delhi University’s Dyal Singh College. A bus terminus in the vicinity sponges off the Metro’s potential customers. The station is half a mile from Lodhi Garden and Humayun’s Tomb. The view to its south is framed by the wicker-basket roof of the area’s signature landmark—the stadium. The station’s exterior has the ceramic display of a rising sun and a running horse. On a weekday afternoon, the road is lined with parked cars and chartered buses. Fruit and juice vendors depend on business from students.

“Perhaps this gigantic station has been made for our college,” says Jyoti Srivastava, a first-year student of Dyal Singh. She is chatting with a friend on the stairs of Exit 5. “I never see other people here. It’s always us students hanging out here.”

In December 2012, global retail chain Hudson News & Café, which has set up shop at many Metro stations, opened an outlet here. It’s got teddy bears, smiley watches, a coffee vending machine and Kurkure packets. “You can see this place is for youngsters,” says shop assistant Mohammed Laik. “Our sales drop by half during college holidays.”

The outlet is sensible enough not to ignore the non-student population—those employed at the CGO offices and nearby establishments such as the India Habitat Centre. “We get about 17,000 footfalls daily,” says the DMRC. The figure for not-so-distant Green Park, on the busy yellow line, is 48,500.

“Within two years, violet line will be extended to Faridabad on one side and Mandi House and Kashmere Gate on the other,” says Mr Dayal. “It will become enormously busy and so will the JLN Stadium Metro station.”

For now, the avenue outside the station remains deserted on weekends. The sight of the sports stadium, rebuilt at a cost of Rs.961 crore, inspires scant enthusiasm. The gleaming white structure is a symbol of the Games and of various construction and renovation schemes launched to make Delhi world class. The stadium has got a life beyond the Games—it is open to any sport enthusiast for a fee. But other Games-related enterprises have remained in the doldrums.

The colonial-era Connaught Place, dug up for a facelift, is pockmarked with scars, and bleeding paan stains. The airport Metro line, which missed its Games deadline, had to temporarily suspend operations for months owing to safety concerns—it’s again functional. The high-end café-cum-toilet blocks are under lock and key. A number of infrastructure projects are embroiled in allegations of corruption. Meanwhile, the UN report, “State of the World’s Cities 2012/2013”, released in 2012, ranked Delhi 58 in a list of 95 cities in terms of productivity, infrastructure, quality of life, equity and environmental sustainability (Nairobi scored better at 53).

Yet in March 2013, Sheila Dikshit, on completing 14 years as the city’s chief minister, was reported by the media as saying that her “dream of making Delhi a world- class city was coming true”.

At least one Delhiwalla might agree with this assertion—Shera, the Games mascot. If you can’t spot him anywhere, come to the JLN Stadium station. The happy-looking tiger is permanently frozen, waving a V-sign.

It is 8pm. The office-goers, college students and juice vendors have left for the day. The sports stadium lies in the dark. The area immediately outside the station is lit in an orange glow. The paved plaza is faultlessly clean. It has a shiny yellow bench, the kind seen on the college campuses of Karan Johar films. A girl is sitting on it; she is flipping through a glossy magazine. For once, even if it’s an illusion, Delhi feels world class.