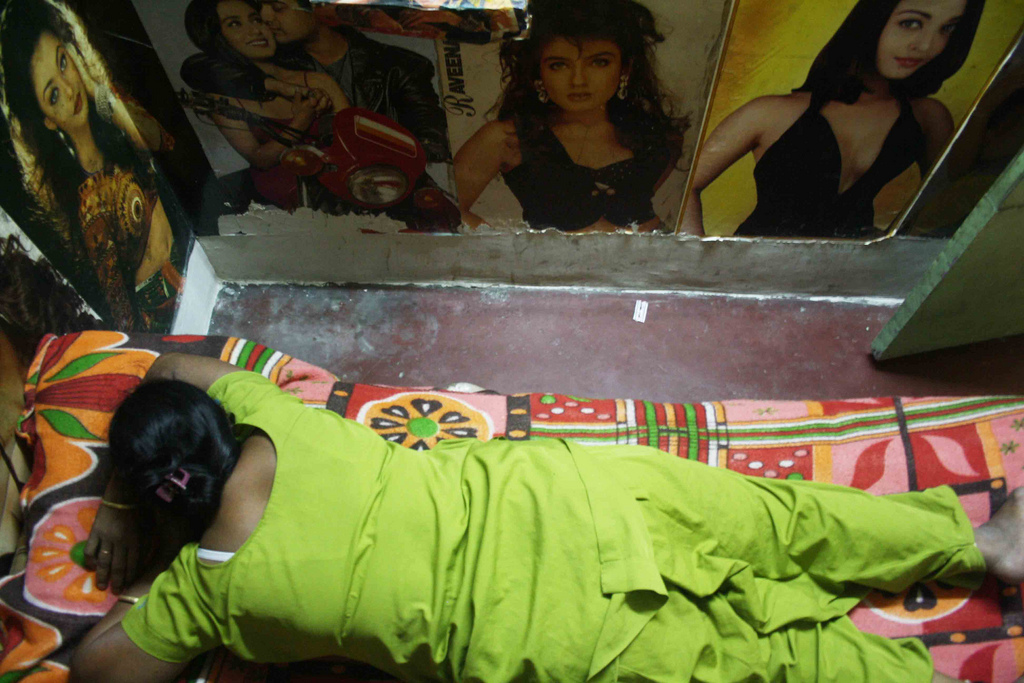 The Reuters Interview – On Nobody Can Love You More Atish Patel of Reuters discussed Nobody Can Love You More: Life in Delhi’s Red Light District, a book by The Delhi Walla. Click here to read it on the agency’s website, or see below.

SUSHMA LOOKS like she is in her late forties; she is not sure about her age. It is not her real name but the one she goes by in New Delhi’s red light district.

Every morning at 2:30 a.m., she wakes up, drinks a cup of tea and paints her face with make-up before stepping out into the street to look for men who will pay her around two dollars to have sex.

Sushma is among the women, men and children living and working in brothel number 300 on Garstin Bastion Road, or G.B. Road as it is more commonly known, in the city’s old quarters and are documented by Mayank Austen Soofi in his new book “Nobody Can Love You More”.

Soofi offers readers a glimpse into how sex workers interact with customers, often aggressively and crassly, and the more regular aspects of their lives, including cooking and praying.

For three years, the author spent time with what he describes as ordinary people living in an extraordinary world.

Soofi, whose blog “The Delhi Walla” showcases the more eccentric things to see and do in the Indian capital, spoke to Reuters about his book and his ‘friends’, the sex workers. He talked on phone.

Q: How did you first meet the people working and living in Delhi’s red light district?

A: “When I first started going to G.B. Road, I had no intention to write a book on the place. A friend told me about the owner of a particular brothel who was looking for somebody to teach English to his children. So, that was how I got an entry into G.B. Road, otherwise it is very difficult to get access to it, unless you are a customer, of course.

“I think the red light district itself is a dying idea. Now you can hook up with people for sex on the Internet. In another 30 years or so, G.B. Road will cease to be what it is now. I thought before this world disappears, I should try to understand it…”

Q: Did you have any misconceptions about people involved in the sex industry that were shattered once you got to know them?

A: “Our ideas of prostitutes and their customers are so much misshaped by popular culture, be it novels or films. But after I made my home in the red light area, I realised that the people there are similar to my own family members. At the same time, I’m aware that the world they are living in is extraordinary because there sex is work, something not considered acceptable in our mainstream society.”

Q: As well as documenting the relationships the sex workers have with their customers, you write about more mundane aspects of their lives. Why did you think that was important to cover?

A: “A prostitute of course is not just a prostitute. Sometimes writers turn people into circus performers to create interest for the reader. I didn’t want to do that. That’s why in the first chapter, Sushma, you know, she is cooking food for me and herself, she is smoking a beedi, she is going out to buy vegetables, and she is telling me about her mother’s favroite colors. These things, to me at least, give a fuller sense of her character. She is not just a commodity. She is a full-fledged human being and, you know, so many things, including mundane aspects, make up a person.”

Q: In your book, the sex workers come across as strong women. Is that a fair description?

A: “Most sex workers I’m close to are very independent in their lives. They don’t depend on men and, I think, some of them feel like they are more free than… so many housewives living in other parts of the city. Sometimes, you know, it is better to be a whore than a wife. But, of course, you cannot draw definite conclusions. This is an extremely complicated world.”

Q: Towards the end of your book, you question whether the people you’ve met have been truthful with you. Do you think you’ve managed to produce an accurate portrait of life inside brothel number 300?

A: “I don’t think you will be able to get a hundred percent accurate portrait in anything. I interacted with so many people and saw so many things and heard so many things and yet… I’m not sure if all stories told to me were factually accurate, but the important thing was that I only wanted to write what the women (and their men and their children) thought was the truth of their lives, and out of that too, I only wrote the parts they were comfortable sharing with the world.”

Q: You met dozens of people while working on this book. Who did you like interacting with the most?

A: “One of the persons I cherish is Roopa. I was so amazed by the progression of her life. Her story began with a cliché — her husband used to be violent with her and then she ran away to Delhi and became a prostitute. Usually, for a sex worker, that’s the end of her old life… but Roopa chose to revive her marriage and re-established contact with her husband. And just when I thought she was back with him, she became close to a pimp from Kashmir.

“Despite severe hardships, to still be able to feel like a complete person, to continue to live with past relationships and yet create new bonds, to never lose hope, love and romance… these are such beautiful things and I saw them embodied in Roopa.”

Q: Do you still visit the brothel?

A: “This book is not a conclusion of a part of my life. The people on G.B. Road and in number 300 are friends and are friends irrespective of my book.”