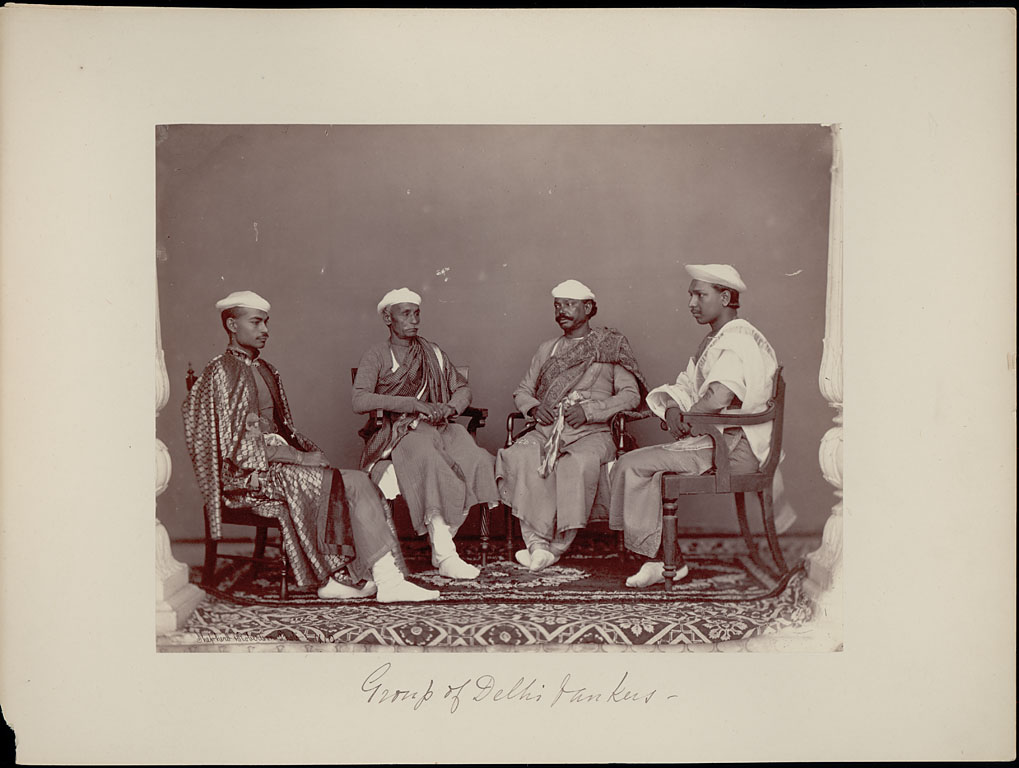 The city in past.

The Union Jack at Red Fort and trams in Chandni Chowk.

After ransacking private albums, antique books, curio stores and the internet, The Delhi Walla has built a collection of images that gives a sense of Delhi in the old days.

The black & white photos showcase periods from the 1850s to the 1960s. Some pictures are disturbingly contemporary.

A rag merchant is selling his wares outside the Jama Masjid; year 1944. I saw such a man in the same area just last week!

A 1948 picture, captioned ‘Families living on Street’, has a woman clothed in a threadbare saree. Two naked children are sitting beside her – she is protectively holding the head of one of them. Behind her is a row of homeless people like her, each with small bundles – perhaps their only material possessions in the capital of a newly independent nation. More than sixty years later if you visit that very place – a red-brick bridge close to New Delhi railway station – you will see the same.

On the other hand, an 1862 portrait of four Delhi bankers encompasses a world of privilege: turbaned, rich, confident, self-absorbed — and their feet resting on an exquisitely embroidered carpet.

One of the more striking photos in the collection shows women operators at the New Delhi Telephone Exchange. A few employees are dressed in salwar suit and others are in saree – each with a headphone. The photo was taken in the 1950s but it could also be a call center in neighboring Gurgaon.

An Associated Press photo, dated 1967, tells us unintentionally that even in the Nehruvian age our policy planners were situated far from the people for whom they supposedly formulated policies. A display board by Municipal Corporation of Delhi stands ignored in a slum. Conveying the family planning message in English, the board is surrounded by slum residents to whom English might be as foreign as Finnish.

Some other photos that evoke the timelessness of our times are borne out of our history’s regrettable milestones. One image is titled: ‘The body of a native killed in rioting between the Hindus and Moslems lies in a deserted street of the Paharganj section of New Delhi – 1947’. This could easily be confused with one of the many photos of November 1984 when thousands of Sikhs were killed in Delhi.

Only a very few photographs encapsulate a way of life that is dead. Take this early 20th century portrait belonging to the family album of an Old Delhi resident. The print has yellowed but the people in it are clearly visible. The bearded man in the center is wearing a striped sherwani and a turki topi. Looking assured about the longevity of his world, his hands are placed on his laps.

In his book In Search of Lost Time, French novelist Marcel Proust said, “The past is hidden somewhere outside the realm, beyond the reach of intellect, in some material object (in the sensation which that material object will give us) which we do not suspect.”

Proust would agree that the likeness of this regal figure does conceal the spirit of Delhi’s sophisticated past.

1. Indian mothers walking past entrance to the Red Fort considered to be a symbol of British rule, in the old section of the city – Delhi 1946 4. A rag merchant displaying his wares outside the Jama Masjid Mosque, Old Delhi – 1944 6. The body of a native killed in rioting between the Hindus and Moslems lies in a deserted street of the Prahagang section of New Delhi – 1947 9. Operators at work in the New Delhi Telephone Exchange – 1950s 10. A man buying fruit from a street stall in front of an advertising hoarding promoting several films in New Delhi, India – 1950s