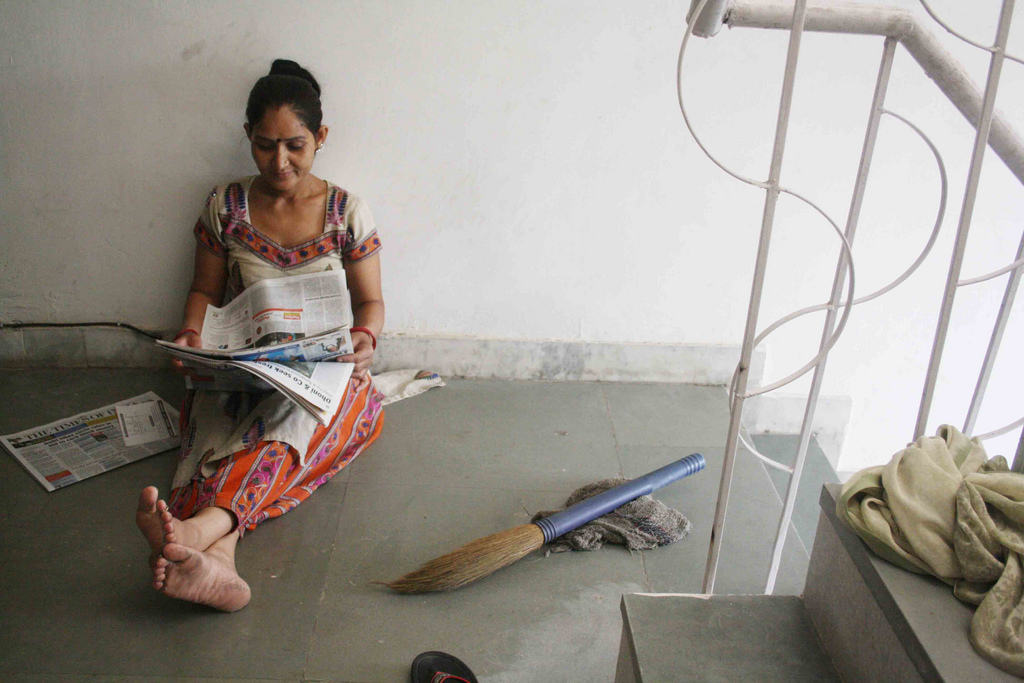 A necessary book for Delhi.

“A really good housemaid should never be able to be alone in a room with a table without giving it a good rub, or, if the room is occupied, without wishing to do so.” This advice in the 1853 manual Common Sense for Housewives sets the tone for a vivid and diverse report on a working class that “squeeze awkwardly into the big narrative of twentieth-century labour history.”

Servants: A Downstairs View of Twentieth-century Britain should be made a compulsory read for every Delhiwalla – Delhi, after all, is a city where the exploitation of domestic staff happens in every privileged home, regardless of its social and educational background. See rules for ayahs at the Delhi Golf Club. (The Delhi Walla wrote a detailed piece on the city’s domestic maids, cooks and drivers here.)

This book is not merely an anthology of petty humiliations inflicted on maids and cooks. It is partially a servant quarters’ portrait of England’s Edwardian age – in the voices of servants. Written by Lucy Lethbridge, a London-based author of several children’s novels, Servants is an historical survey of Britain’s domestic staff – from the country house butlers of the Wodehousian era to the Romanian maids of today.

At the turn of the last century, the single largest occupation in the UK was domestic service – out of four million women in the workforce, a million-and-a-half were maids. “Yet,” Ms Lethbridge says, “despite their constituting the largest working group, the records on servants were simultaneously visible, their presence a sign of status, and invisible, the details of their individual experience subsumed into that of their employers; and it was employers who controlled the historical record.”

The author gathered the previously unheard voices by reading journals, letters and old books on housekeeping tips. She listened to recorded memories and prodded the recollections of those who worked as domestic staff.

The reminiscences of yesteryears especially are “full of the tedium of presentation”, reflecting the eccentricities of the employers: in one family, breakfast eggs were to be continually stirred while boiling so that the yolk was positioned exactly in the middle of the white; in another, the dog was to be fed sponge fingers at 5 pm sharp.

Novelist Thomas Hardy was obsessed with cobwebs. Each night, like a sadistic housewife, he gloomily inspected the galleries of his house, looking for webs his parlourmaid might have missed. “A quiet, shabby little sparrow” – that’s how the maid Ellen Titteringham is quoted describing him in the book The Domestic Life of Thomas Hardy.

Order, cleanliness, nonstop work and discipline defined a servant’s typical day. Elizabeth Banks, an American reporter who posed as a maid in London for a series of undercover pieces in the 1890s, started on the work hoping that “there is nothing incompatible between gentility and domestic work”, but soon discovered “that the employers held on to the gentility and the servants did all the work.”

At one household in Central London’s Portman Square, Ms Banks was required to wake up every morning at six, brush the master’s trousers and the mistress’s dress, get the family’s boots shined by the cook, “sweep and dust four flights of stairs and four halls, clean up and dust the study and drawing rooms, and carry a can of hot water to each person, knocking on the door to wake him or her up.” And only then “she may have her breakfast.”

The mistress wasn’t done yet – “After you have breakfasted Lizzie, you must help Annie with the dishes, then make the beds, clean up the washstands… and you can fill up the time until supper with needlework.”

Touching upon the British experience of servants in India, Ms Lethbridge writes, “An aristocratic household in Delhi was run with the oiled efficiency of the English country house, its retainers the necessary cogs in the vast machinery of the home.” She quotes Indian-American travel writer Santha Rama Rao from her book Home to India, saying, “The servants scurried about on bare feet, the tails of their turbans and the fullness of their white coats waving behind them as they dodged among the people at the table with fresh dishes. They were silent, obsequious and omnipresent.”

Most servants in a typical British household in Colonial India were men. (Ayahs were exceptions.) The cook ran the kitchen. The derzi, or tailor, stitched clothes on the verandah. The dhobi did the family laundry. The chuprassi was the courier. The punkah-walla pulled the rope that moved the punkah, or fan. These men were not to be trusted. Every memsabib knew the story of the cook “straining the soup through the sahib’s dirty socks.” She was warned that it was unwise to have (native) servants “who spoke English too well lest they overhear conversations and report them back to the servants’ hall – thus putting at risk the mystique of the British ruling class.”

On the other hand, in Britain, many large houses had servants’ libraries stocked with “carefully selected uncontroversial, non-political and generally improving reading.”

Too much reading among the servants, however, was not desired. Not many employers were in need of a Jeeves. Lighting engineer Borlase Matthews is quoted from the book Artificial Sunshine: A Social History of Domestic Lighting, saying, “The lighting of servants’ bedrooms is a debatable point, as it encourages reading and consequent long hour-burning… in some houses, the lights in the servants’ bedrooms are so wired that they can be controlled by a switch in the dressing room or similar place, so that the consumer can extinguish their lights when he goes to bed himself.”

By the late 1960s the demand for servants fell sharply in Britain, pressed by economics and ideology, forcing many old servants to work for their own generation of employers who had never brushed their own clothes.

In the last two decades, though, the service economy has “grown beyond expectations”. Quoting social historian Pamela Horn, the author claims that between 100,000 and 200,000 migrants came to Britain between 1996 and 1997 to work as domestics.

In the final chapter, Ms Lethbridge makes the moving observation: “The demand for domestic service has increased not just because people have got richer, but because of the availability of so many poor women who have no option but to take up domestic work.”