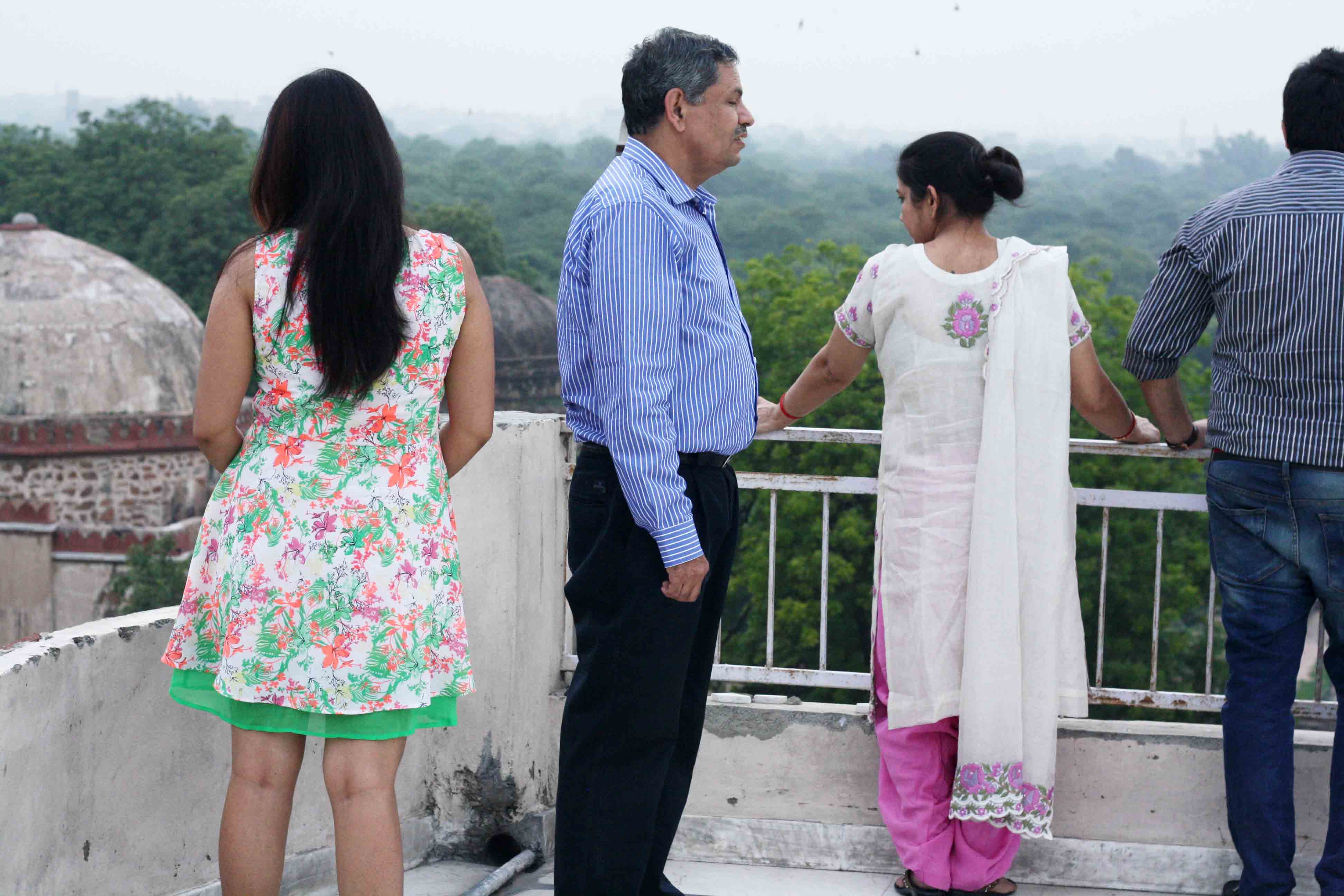 Hauz Khas Series – A House in the Village, Chapter 6 The Delhi Walla has been asked to move out of his rented room in Hauz Khas Village.

Ah, these greedy landlords! The rant of every artist/designer/hipster of Hauz Khas Village. Wasn’t it once just another ugly village in south Delhi, notwithstanding its picturesque ruins? Wasn’t it us the long-haired bohemians who made it oh-so-cool? So cool that rents skyrocketed and landlords kicked us out for those willing to pay more (the prime location on the main street could command Rs.1.5 lakh a month).

Mange Ram Gochhwal, 55, looks puzzled by the first charge. A landlord in the village, he lives in a monument-facing abode with his wife, son, daughter and 17 tenants. Lounging on a soft leather sofa, he says very politely, “Myself greedy? It’s the demand and supply of the market. There are big chains tempting us to lease out our homes to them at such high rates you cannot imagine. A day might come when, like a few other landlords, I will move to Vasant Kunj or Gurgaon, and this whole house will be on rent.”

Mr Gochhwal’s drawing room has a cinematic view of the 14th century tomb of emperor Firoz Shah Tughlaq. The balcony almost juts out on to the monument. “See that imli ka ped,” he says, gently pointing to a tamarind tree near the stone gateway. “On this side lived us Jats, on the other side the Muslims.”

Mr Gochhwal is talking of the time before Partition. Waving his arm towards the Deer Park, he says: “It was agricultural land. The farms stretched as far as (what is now) RK Puram Sector 3. We cultivated wheat and grams in winter and bajra in summer. And the lake… that lake was a pond.”

Cars are the new cows. “My father had two buffaloes,” says Mr Gochhwal. “I have a Volkswagen Polo, Škoda, Alto, Accent and a Toyota Fortuner… it’s an SUV. At least 10 families (here) have SUVs.”

The village has become completely urbane. Concrete blocks have come up everywhere, save for a row of shanties on the southern side, which are home to the area’s street vendors, a no-go area for shoppers. A lovely old-fashioned panchayat building on the main street doubled up as a primary school; it was demolished two years ago. Close by, a temple survives.

The crowd in the village comprises of stylishly-dressed visitors. The sights of some local women — their faces hidden beneath dupattas—could be a culture shock to some. The inside lanes stink of drainage.

Village folklore tells of a Muslim zamindar presiding over it 400 years ago. Since his two sons could not take care of the sprawling estate, they invited a Jat family from Mohammadpur Nangli village in Alwar, Rajasthan, promising them one-third of the land for free.

That family from Alwar has today grown dozens of branches, and Mr Gochhwal’s is one of them. He says: “After Partition, some Muslim families, descendants of the zamindar, left for Pakistan while others stayed back with their Hindu neighbours. A decade later, our farms were acquired by the government.”

Today, every family in the village survives, and thrives, on the rent money. “We have,” says Mr Gochhwal, “40 restaurants and 60 landlords (in the village), of which 15 are those who were not the residents here but purchased the land for commercial interests.”

Some landlords have leased out parts of their houses to restaurants, boutiques, galleries and studios. Some keep lodgers. Mr Gochhwal’s four-storey pink mansion consists of two dozen furnished rooms, the most expensive accommodation being a two-room set at a monthly rent of Rs 25,000.

The house is like a mini United Nations. There are tenants from Brazil, South Africa, France, England, the US, Japan, and India. A Spanish cinema PhD student left two months ago. One room houses a certain Mr George from Georgia. “We prefer firangis,” Mr Gochhwal says, “They are cleaner, politer, and efficient with water management, and they pay the rent on time.”

The lodgers include a fashion designer, an event manager, a real estate entrepreneur, a doctor, an engineer and a magician.

The village’s earliest tenants — in the 1960s — had less imaginative professions. They were postmen, cab drivers and hospital compounders. “Even then, however, the village was a popular place among Delhiites though it did not have restaurants,” says Gochhwal. “In the 1960s, the American embassy regularly hosted candlelight parties in the ruins. On Sundays, families from Old Delhi picnicked.”

From Mr Gochhwal’s balcony, we can see tourists walking around the monument, guidebooks and cameras in hand. One man attempts a yoga asana in the garden. Another, a woman in straw hat and sarong, is painting on an easel-mounted canvas.

“I was born in Out of the Box,” says Mr Gochhwal. He means the building which houses the café of that name. That was his father’s original residence. Later, the family built another house at the site of his present address. “This place, where we are now, was a semi-wilderness of stones and bushes. We first raised a shed for our cattle and farm equipment. Later, we turned it into a seating area for the family’s men. The women continued to live in the old house.”

That house still belongs to Mr Gochhwal’s extended family. In the 1990s, one of his brothers rented out a portion to Village Bistro, perhaps the earliest restaurant in Hauz Khas Village. It was closed during the sealing drive in 2006. Mr Gochhwal never tried its delicacies. He rarely dines out. Living amid some of Delhi’s most loved places to eat, he has only once tasted Yeti’s Tibetan food. He has never been to Gunpowder.

“It’s our children who have stopped eating at home,” he says, referring to the new generation, the future landlords. “They sleep late and wake up late. Actually, our girls are more focused. My daughter Shruti topped in science in her intermediate—she drives alone everyday to her engineering institute in Dwarka. One of the girls here is a national-level swimming champion. But my Siddharth!”

“Every evening, the village’s old men sit on the main lane and watch the girls walk by on their way to restaurants,” says Gochhwal. “The grandfathers stay out till late hours and don’t get up even when their families start calling them on their phones to come home for dinner.”

And what does Mr Gochhwal do in the evening?