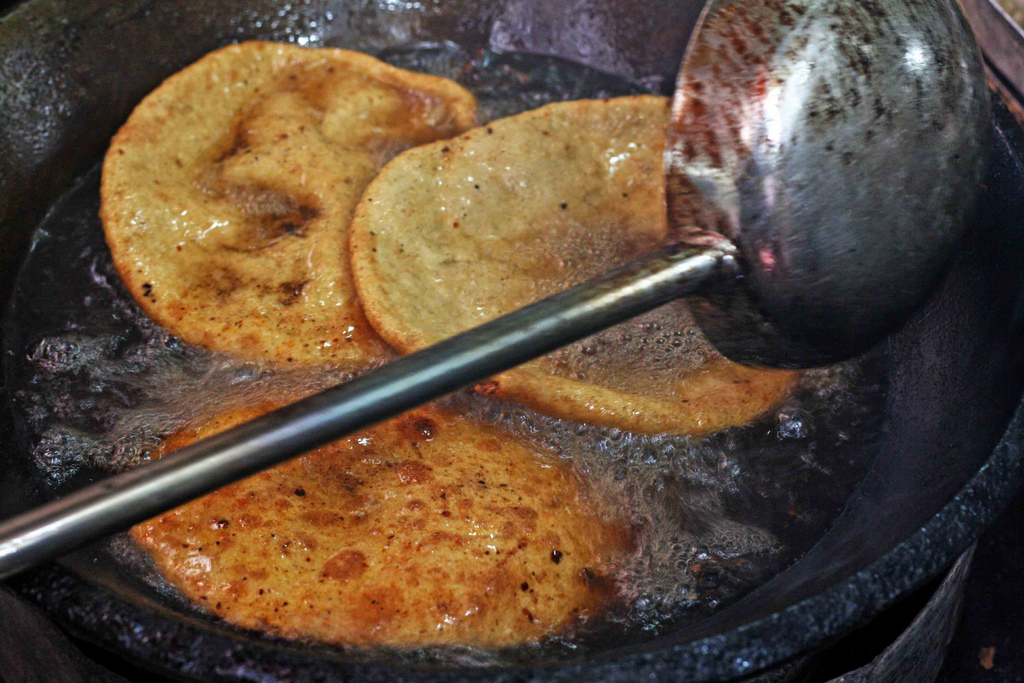 And the best address in town is: Gali Paranthe Wali.

The promotion literature for Mr Gupta’s debut film sells this street as a place whose name makes “you fantasize about plates of steamy, crispy, puffed-up parathas, drowning in lots of gooey, yummy ghee, stuffed with an array of vegetables and meats.” Meat… that’s foreign country here! The parathas here come stuffed with the most unusual and varied ingredients—poppadum, cashew, khurchan (leftover scrapes of sweetened, dried and caramelized milk), lemon, khoya, bitter gourd—but you won’t smell garlic or even onion in the purely vegetarian gali.

The L-shaped lane starts from Chandni Chowk’s main avenue and ends in Kinari Bazaar — you can walk through it in 5 minutes flat. Blame its daytime chaos on the four paratha shacks.

“Once we had a dozen parathe- wallas here,” says the elderly Rajkumar Sharma, the street’s walking-talking Wikipedia whose ancestor Gaya Prasad Donariya established the street’s paratha empire in the second half of the 19th century, moving here from his village near Morena in present-day Madhya Pradesh. The former farmer’s single establishment expanded down the generations; the individually owned eateries we see today trace their links to the same founder — some clan members also trade in mithais (sweets).

Mr Sharma rules Rabri Bhandar, a shop with just enough space to fit in his protruding belly. Sitting behind metal trays filled with milk cake, rabri and other dairy-based desserts, he throws a sympathetic glance at a bunch of wide-eyed customers standing outside a packed paratha shop.

Not everyone comes here a second time — a blogger at www.foodenthusiastsofdelhi.com describes the garbage-strewn Gali Paranthe Wali as a “tourist trap. It’s a black spot on Dilli ke parathe. The parathas that they make are nothing like parathas are supposed to be or are in our homes or anywhere else.”

On being asked about the changes seen in the lane, Mr Sharma says, “The paratha’s size has become smaller.”

It is also less soft. That’s the feeling of Satish Sundra, the owner of Connaught Place’s iconic Ram Chander & Sons toy shop. A connoisseur of Old Delhi’s cuisines, Mr Sundra has been visiting the eateries of Chandni Chowk, including Gali Paranthe Wali, since the 1940s. “You ate there because the paratha was so much like what our mothers made — aromatic and soft,” he says. “The freshly ground masalas obtained from Khari Baoli have been replaced by readymade spice powders. Even the ghee lacks purity. The paratha is now deep-fried instead of being pan-fried on a tawa (griddle). The softness has been sacrificed to fasten the cooking time. Yet I go there because you have no better choice if you want to have parathas in Delhi.”

Chandni Chowk’s incredible filth hasn’t dented its reputation as our city’s heritage gourmet destination. While some celebrated landmarks are said to have seen their best days, others continue to be approved by many of us—of course, there’s no consensus. Mr Sundra, who visits the bazaar at least thrice each month for his business, is a faithful pilgrim to the area’s epicurean shrines. Closing his eyes, he folds his arms on his well-nourished belly and says, “The urad dal bhalle in Natraj ke bhalle used to be as smooth as a girl’s cheeks. But not all is lost. Kanwarji’s dal-moth is still the best, and when you pop in their green piste ki burfi (nowadays available only on order), you sense as if hundreds of pistachio nuts are exploding in your mouth. So sad that the sons lack their father’s warmth… ”

Hearing Mr Sundra talk of Chandni Chowk’s eateries and dishes is like reading that famous chapter in Iliad in which Homer catalogues the ships and warriors of the Achaean army.

“The Ghantewala (confectioners) commanded a following because of the almond-studded sohan halwa. My father-in-law, a barrister in the Allahabad high court, sent a man every fortnight to Delhi just to refill his stock. Sadly, the inheritors couldn’t keep the standards. Meghraj’s Punjabi pinni is still other-worldly, so is Chaina Ram’s Karachi halwa. To this day the unnamed stall (outside Srishti Sarees showroom) in Malliwara, very close to Gali Paranthe Wali, makes such excellent bedmi poori that I often overeat to the point of becoming sick. A further 10 yards from there, as you turn left, stands a lassi stall; they are very generous with malai. Before I was forced to cut down on my sugar, I would have at least 100g of jalebis each time I stopped by Dariba Kalan’s Old Famous Jalebi Wala. Their jalebi is as thick as my finger, and so syrupy and crunchy. You would never carry it home though — it gets soggy very fast. There also used to be a chaatwalla off the Esplanade Road, beside a drain where people urinated. But what golgappas! That man hasn’t been seen since decades. A pavement golgappa stall near Haldiram’s has emerged as a decent substitute.” As soon as Mr Sundra utters the name of the sweets and snacks chain, he makes a sour face, as if he has tasted something mass-produced.

This is not the first time Gali Paranthe Wali is being featured in a film. It was recreated in 2009 for Chandni Chowk to China, a box-office turkey whose lead actor Akshay Kumar had a childhood home here. Indeed, every eatery has its own wall of fame with framed portraits of film stars, ex-maharajas and prime ministers eating parathas.

The Babu Ram Paranthe Wale shop has a photo of the late actor Farooq Shaikh. “He had our gobhi ka paratha three years ago,” says owner H.K. Sharma. As a hurried waiter pushes me on his way to clearing a table, Sharma says, “The table arrived after azadi (freedom). Earlier, people would sit down on a mat and be served. Long before that, we did not even have crockery. Customers were served on pattals (leaf plates), and since we are Brahmins, the customers themselves had to throw out their used pattals. This continued until we started hiring dish-washers.”

Mr Sundra recommends that when you happen to be in Gali Paranthe Wali, you must try his most beloved dish on that street — and it is not a paratha. “Be sure to stop by any of the tiny mithai shops there,” he says. “Ignore the halwas and burfis, and just ask for a plate of rabri. It’s the best in Delhi.”

Is director Gupta aware of the lane’s milky secret? If yes, I might consider parting with my hard-earned cash to watch his magnum opus, money some of us may have gladly traded for that hot, finger-licking khoya paratha.

15a (Jalebis of Old Famous Jalebiwalla)