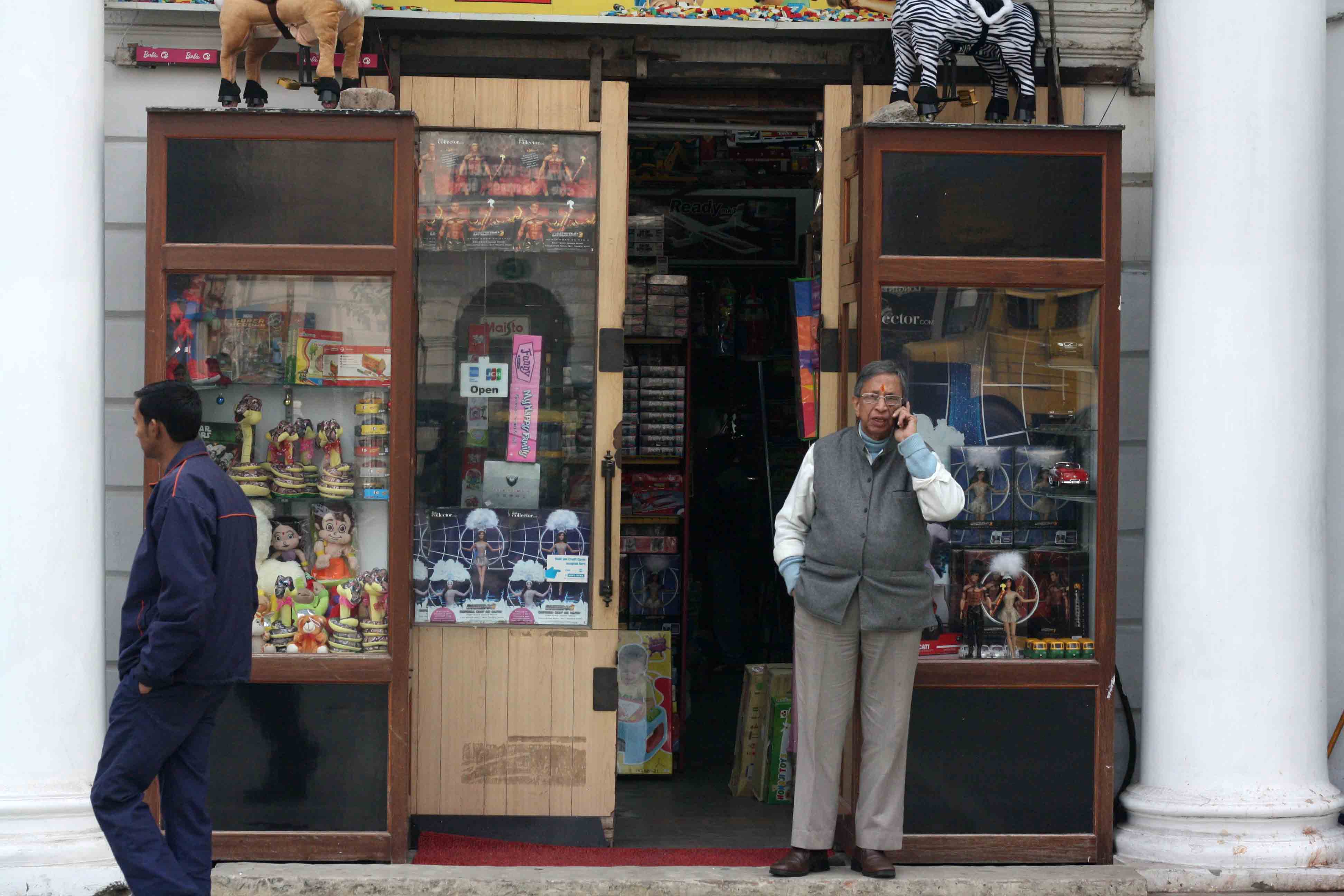 The pillars outside the corridor have been repainted. The adjacent Odeon Cinema has been taken over by a multiplex chain. Elsewhere, most familiar landmarks have given way to junk food outlets and retail chain showrooms. But Ram Chander & Sons, which claims to be India’s oldest toy shop, has survived. Here, Indira Gandhi bought toys for her sons. Sonia Gandhi would come to buy Christmas trees. Atal Bihari Vajpayee was a regular till he became prime minister.

Situated since 1935 in the D-Block of Connaught Place, Delhi’s colonial-era shopping district, Ram Chander has chugged along with the market’s fluctuating fortunes, so far resisting the easy-money temptation of converting into a franchise store.

“As long as my son and I are alive, we are not turning into Café Coffee Day,” says Satish Sundra, 74, the shop’s patriarch. Inside, photographs of Mr Sundra’s parents hang on a wall along with a portrait of Lord Ram, 1935 vintage. “I believe in family traditions,” he says.

Just then a couple in their late 20s enters with a child. The child asks the sari-clad assistant at the counter for a flying helicopter. Price: 4,000 rupees. The husband pays and they walk out. No question is asked, no bargain demanded.

The shop was started by Mr Sundra’s father Raj Sunder, who grew up in Ambala Cantonment where his grandfather Seth Chunnilal — a Marwari migrant from Rajasthan — had set up a toy shop in 1890. Forty years later, the family opened another outlet in Kasauli.

In the mid-1930s, many traders living in small towns were looking for greener pastures in the big cities of Lahore and Delhi. Raj Sunder, Chunnilal’s grandson and a son of Ram Chander, opted for Delhi. Being imperial India’s new capital, it was the city of the future. The construction of New Delhi had started. Bungalows were coming up on Aurangzeb Road and Ashoka Road. Connaught Place (CP) was brand new and dirt cheap. The builders were begging traders to fill up the shops. Raj Sunder, who arrived with his family, was almost broke when he was shown a shop owned by a contractor called Rai Bahadur Tirath Ram. “Take it. Pay the rent when you can,” he was told. He opened the family’s third toy outlet and named it after his father.

Mr Sundra was not more than three at the time but he remembers that for the first two years the family lived in the shop. His mother cooked on a coal-fired angeethi behind a curtained partition. “Father opened early in the morning, closed late in the night, as long as customers would come.” This was true for most shopkeepers in the area. A few years later, the family rented a two-room house on Hanuman Road.

When 17-year-old Mr Sundra — then a student of History (Hons) at St Stephen’s — took over the business after his father’s death in 1954, tin soldiers were the most popular toys, followed by train sets and wooden yachts. Dolls were made of rubber, celluloid and cloth. Toy cars came in models of Triumph, Silver Cloud, Austin and Woolsey (today, the display models are Mercedes, Audi, Ambassador and the green CNG autos). There was greater emphasis on mental and physical activities (jigsaw puzzle kits no longer sell in high numbers and functional gardener and carpentry sets have disappeared).

“Till the early 1950s, the quality of toys coming from Europe and America was superb and the toys were meant to last for generations,” says Mr Sundra, citing an example of a wooden feeding chair that was still being used 40 years later. “Now, there is more artificiality. Purity is lacking… in all walks of life.”

The store now sells Sony PlayStations, video games, radio-controlled racing cars, flying airplanes and telescopes. In 2009, Ram Chander became the sole distributor in India of the US-made Guillow toy planes. Assembled and then flown, the kits come in 30 varieties, with prices ranging from 475 rupees to 5,000 rupees. “Today a good toy is available for as low as 100 rupees,” says Mr Sundra. “A class IV employee can buy a game for his child, which was unheard of 30 years ago.”

For a few years after independence, Connaught Place continued to be a market of the elite. It was the shopping arcade of maharajas, Rai Sahibs, Rai Bahadurs and the remaining British gentry. Odeon Cinema screened only English films. For the evening show, Delhi’s stiff upper lip nobility would arrive in Packards and Austins. They would drink in the cinema’s bar, and after watching the movie would head for dance and dinner to Davico’s in the Regal building or Wenger’s Ballroom in A block.

In the mid-1950s, Odeon switched to Hindi films. “The Indians who came for Bombay films were not that toy-inclined,” says Mr Sundra. After 1960, offices started coming up on the first floors, replacing residential apartments. The bania tradition of neechay dukaan, upar makaan (shop downstairs, home upstairs) died. By then maharajas and the English had been replaced by bureaucrats and politicians.

The economic liberalization of the 1990s brought more money and customers. Parents had more buying power to accommodate the demands of children. After the Rajiv Chowk metro terminus opened in 2006, the number of daily visitors to the shop more than doubled: from 20 to 50. “Thanks to the Internet and cartoon channels, today’s children are six months ahead of me,” says Mr Sundra. A child told him about Beyblade — a made-in-China spinning top toy — two months before it became a rage.

While the shop hasn’t changed its original teakwood shelves and no rack has been added or subtracted, Ram Chander’s carefully cultivated messy look (apparently children relate to messy places) and its adaptability to changing demands have enabled it to survive. If earlier the toy companies were mostly British-owned (Meccano Ltd, Palitoy, JW Spear), now most toys are from unknown Chinese firms. On a good day, sales reach 25,000 rupees.

Ram Chander faced major crisis twice: Immediately after Partition, when refugees from what had become Pakistan took over CP’s streets and — for the sake of survival — aggressively sold everything from pins to pyjamas at cost price or at Rs1 margin per unit. The second blow came in 2009, when CP was dug up for the Commonwealth Games. “Nobody would come. We would sit idle for hours, sometimes daily sales wouldn’t go more than 1,000 rupees,” says Mr Sundra.

Will Ram Chander become a Cafe Coffee Day? “We have laid down a tradition and built goodwill,” Mr Sundra says. “It is good to hear customers saying, “I’m coming here since my grandfather’s time.”