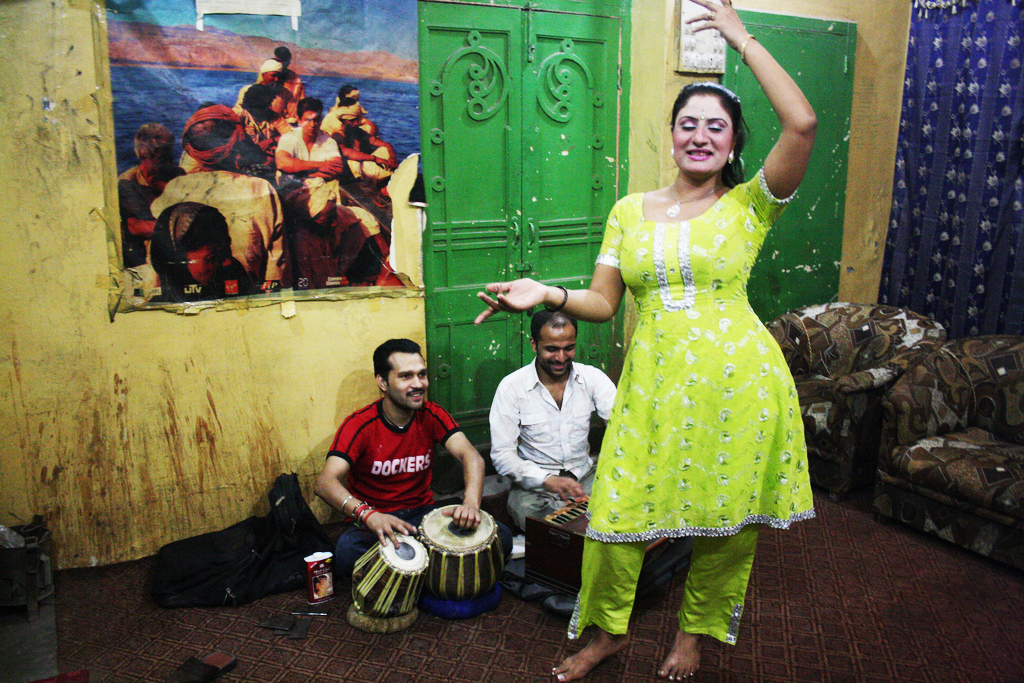 During the reign of Mughal emperor Muhammad Shah, a young man from Hyderabad called Dargah Quli Khan stayed in Delhi from 1739 to 1741. Muraqqa e Dehli, his diary of those years, contains observations on the city’s cultural and religious life, which includes his insights on Delhi’s famous dancing girls and boys. The Delhi Walla cherry-picks a few.

1. Ad Begum
She paints her legs with beautiful designs that look like pajamas, but she doesn’t actually put on one – even when she is dancing in a gathering.

2. Saras Roop
Highly admired for her dancing, her singing is like a breath of fresh air for the weary soul. The aroma of her verses is fast spreading far and wide. The pleasure of her company can be attained only after prior permission, and must be sought with attractive gifts.

3. Nur Bai
She lives in a grand mansion, full of curios usually associated with the houses of the nobles of high rank. Her mode of conveyance is an elephant. Whoever gets enamored of her gets sucked into a whirlpool of her demands and brings ruin to his house. The pleasure of her company can only be had as long as one is in the possession of riches to bestow on her.

4. Behnai-Feel Sawar
She is a well-known dancer and is the head of many other dancing girls. She has mace beares as servants. Her relations with nobles are on a equal footing.

5. Sultana
A 12-year-old, olive-complexioned ‘catamite’, he amazes everyone with his intricate footwork. The thirst for a vision of his beauty is not easily quenched.

6. Kamal Bai
At one time her retinue adorned the gatherings hosted in the Imperial Court. However, since the invasion of Nadir Shah, His Majesty has suspended musical soirees from his court. Consequently, her company, which had previously been forbidden, is now accessible.

7. Chamani
She has access to the Emperor. The lesser men can reach her only by showering her with gifts. Her singing is intoxicating and rekindles the dormant desires. In the singing of tarana her tongue moves sharper than scissor.

8. Allah Bande
He is a young ‘catamite’ with an attractive body. His father was one of the famous qawwals of Delhi. Many people are fond of him and they have consummated their desires with his co-operation.

9. Chak-Mak Dahni
As a young girl, she was the cynosure of all eyes. The emperor, too, was attracted to her. However, she now stands on the threshold of old age, and so there is a marked decline in her fame. Yet, to this day, it is difficult to seek intimacy with her without first lavishing adulations upon her.

10. Asa Pura
Past the bloom of youth, she is sought only by those who have a passion for music.

11. Kali Ganga
Her dark complexion is like the black eyes of a doe. She sings like a connoisseur and her dancing is akin to an elegant walk.

12. Zeenat Behji
Her well-shaped figure and coquetry help increase the lust of her admirers. Her renderings of raags and surs are charming. She has a nomadic temperament, and is not stingy with her favours. Her nights are spent in the company of scheming fellows and her days with local wits. She is passed from one person to another like a goblet of wine, and is carried from shoulder to shoulder like an earthenware pot.

13. Gulab
A singer of merit, she is sagacious in poetry. Her eloquence and understanding of minute subtleties and ready wit make her an admirable company to be with.

14. Ramzani
Her advancing age is an obstacle in attracting more paramours for the nights, but she still attracts people who appreciate her gestures and subtle words.

15. Rehman Bai
Her appearance reminds one of the picturesque evenings of Kashmir. Her black skin refreshes the soul. She is cautious of being embraced in gatherings and steers clear of demonstrative admirers. It is said that she is still a virgin.

16. Panna Bai
Her voice brings the freshness of the garden into the room and soothes the distraught hearts of those separated from their lovers. Her verses can only be followed by the learned and her conversation is more appealing than the coquetry of most women.

17. Mian Hanga
A fair-complexioned young man, he looks like a jasmine flower in white dress. He regularly performs outside the Red Fort. His coquetry compels many people to empty their pockets on him and they return empty-handed having lost both time and money.

6. (This picture was taken by me in Heera Mandi, Lahore)