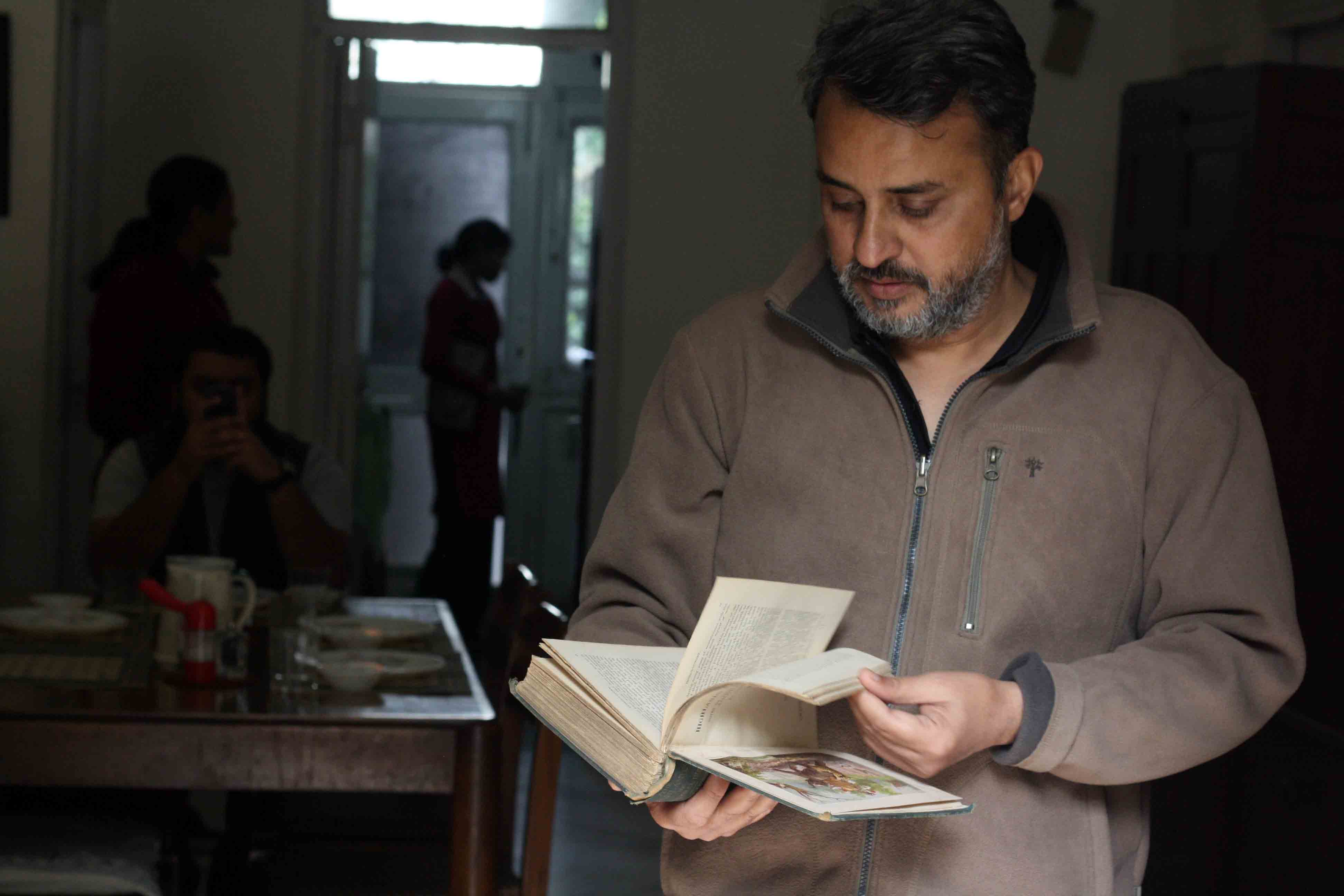 One mildly-warm dusty noon, The Delhi Walla knocks on the door of Jhampan Mookerjee. In his fifties, he lives in an apartment in Gurgaon with his thousand books, three dogs, two children and one wife.

“I have the first edition set of all the 10 volumes of Salim Ali’s Handbook of the Birds of India and Pakistan,” says Mr Mookerjee. “Each of them is inscribed with Salim Ali’s signature.”

A former journalist, Mr Mookerjee has made TV documentaries on environment – one “exciting” project focused on cow dung as an energy resource. He now works as a wildlife conservationist, and naturally, has many books on trees and flowers, and also on wildlife.

“This is a first edition with very few surviving copies,” he says, showing a 1944 copy of Man-Eaters of Kumaon, a classic by legendary hunter-conservationist Jim Corbett.

Holding the slim hardbound of Corbett’s Tree Tops, Mr Mookerjee says, “This book has an interesting anecdote on Queen Elizabeth. She was then still a princess, and was visiting Kenya with her husband. They were being guided by Corbett who was living in retirement in Africa. One night during the royal trip – the night the King died – the couple stayed in a game-viewing lodge built in a thick tree. And here…on this page here…Corbett wrote…” Mr Mookerjee begins reading a passage:

For the first time in the history of the world a young girl climbed into a tree as a Princess, and after having what she described as her most thrilling experience she climbed down from the tree next day a queen – God bless her.

Mr Mookerjee’s collection is built over past 30 years largely from second-hand bookstores, though he makes it a point to regularly patronize the Midland Book Shop in Gurgaon’s DLF City Phase I. Since his constantly expanding library is threatening to colonize his entire apartment, he has packed many books in cardboard cartons. “At least they are safe from Gurgaon’s dust.”

Pointing to the crowded shelves of his drawing room, he says, “The novels there belong to my wife Sheema. Once I too liked fiction but now my life consists of non-fiction.”

Although a Bengali from Calcutta, Mr Mookerjee grew up in small towns of Rajasthan, where his father was posted as a district collector. The young Jhampan spent his childhood years unschooled, hunting birds and reading indecent novels by Karnal Ranjeet, whose detective hero Major Balwant would regularly plot bathing adventures with his secretary, Sonia. “My father’s mother introduced me to Karnal Ranjeet,” says Mr Mookerjee. “We had lots of pets at home…spotted deer, peacock, partridges, black bucks…once somebody gifted two tiger cubs to my father. In trying to feed them the cubs scratched us black and blue, sot we gave them away to a zoo.”

“The India Magazine from the Business India group, surprisingly, published some of the earliest contemporary books on Indian natural history and these included Divyabhanusinh’s biography of the Asiatic cheetah and Zai Whitaker’s amazing autobiographical account of the setting up Madras Snake Park and the Crocodile Bank with her then husband, Romulus. Calcutta had a major flood in 1998. I found this water-soaked Snakeman lying in Business India’s office basement. Funny, Rom’s present wife, Janaki Lenin, has also written a book about her life with him, My Husband and Other Animals.”

Curiously, many books share shelf space with empty liquor bottles – each with a label that shows an animal. “I’ve got books on booze, too,” says Mr Mookerjee. He is writing a book on the indigenous alcohols of India.

Escorting me to another room, he opens an almirah and takes out On Safari: The Story of My Life by a certain Armand Denis. “He was the first guy to start making films on wild life in Africa.” Taking out another hardbound — Michaela Denis’s Leopard in my Lap — Mr Mookerjee says, “Michaela was Armand’s wife. This is her signature. ”

The wild life enthusiast is also a collector of guidebooks. The weather-beaten paperback of Lonely Planet West Asia defies geography by including a long section on India. “I found it lying unclaimed in a shikara on Dal lake in Sri Nagar.”

Last year Mr Mookerjee met the guidebook company founder and the book’s author, Tony Wheeler, who inscribed the following words on his valuable copy:
To Jhampan,
An old book!

“Walking around Asia’s largest animal fair at Sonepur near Patna in 1987 I bumped into an elderly European couple struggling to communicate with an elephant owner. I helped translate and he turned out to be the famous travel writer Eric Newby with his wife Wanda. He was then The Observer’s travel editor and had written books like A Short Walk in the Hindu Kush and the classic Slowly Down the Ganges. It was exciting because I had read almost all his work and I happily spent the day walking with them as their interpreter. He later sent me signed copies of two books I had not read, The Last Grain Race and Something Wholesale, one of the earliest books on the garments business, which he was briefly a part of. He died in 2006.”

As I prepare to leave, Mr Mookerjee looks affectionately at a Bengali-language hardbound novel. “This is one of my most precious books. It was written by my mother’s mother.”