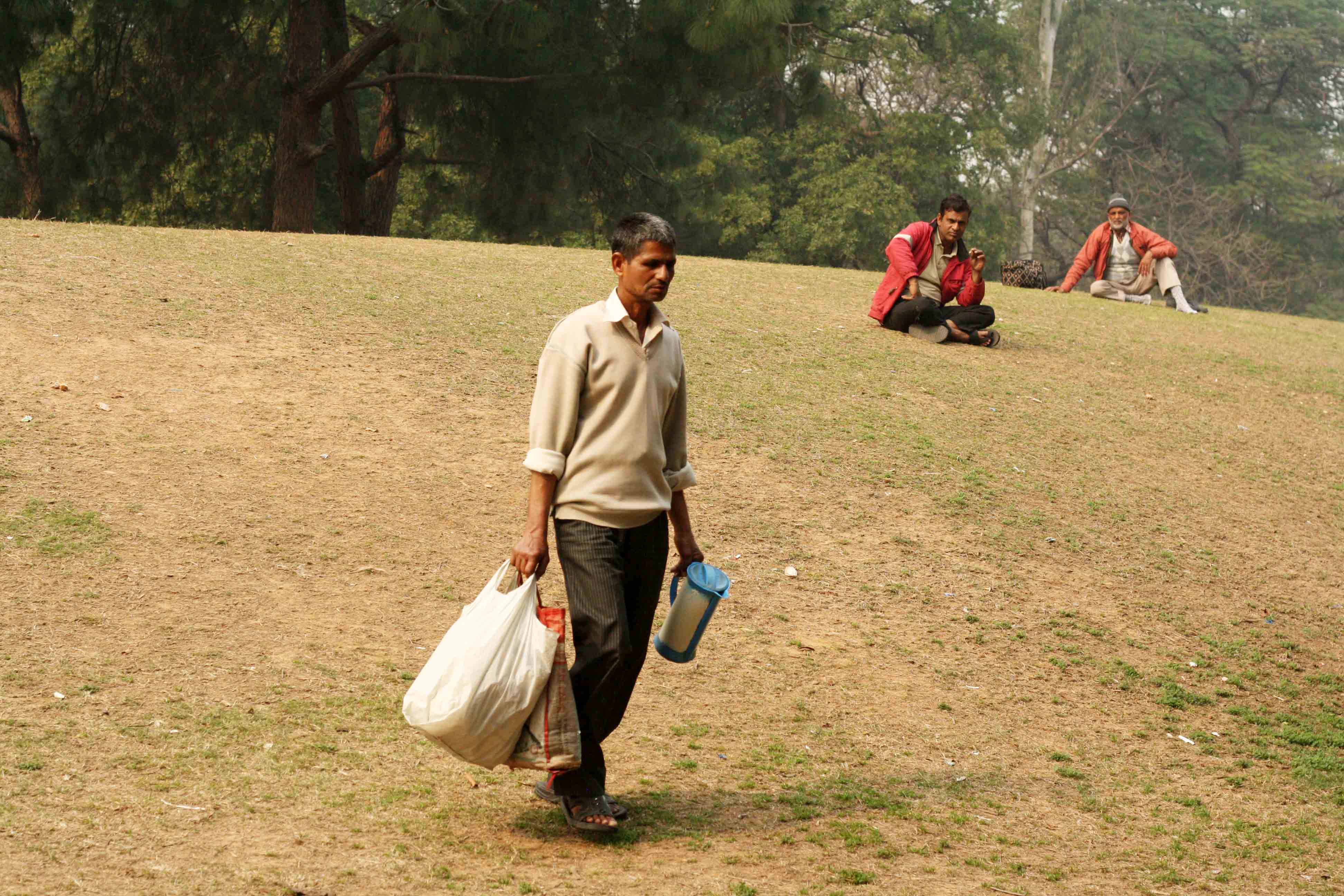 Laxmikant Shukla is as much a Khan Market institution as Dayal Opticals or Chonas restaurant. Since 1972, he has been coming to Delhi’s most posh market to sell dusters and mops. The shopkeepers as well as regulars to the market are familiar with his sight, if not his name. They instinctively make way for him as he walks down the front lane, guided by his walking stick—Shukla cannot see. “The goddess of chechak (small pox) entered my eyes 20 years ago,” he says.

Mr Shukla is one of the millions of street hawkers in India’s cities, towns and villages whose life is set to change. In February 2014 the upper house of Parliament passed the Street Vendors (Protection of livelihood and regulation of street vending) Bill, 2012. It will become an Act as soon as the President gives his assent.

“I think we will no longer be harassed by authorities,” says Shamsuddin Khan, a seller of starfruit and sweet potato. The Delhi Walla meets him as he is walking towards East Kidwai Nagar in south Delhi. With a straw basket on his head, Mr Khan is carrying a wooden tripod, tirona, under his right arm. Stopping to set up his stall, he arranges the tripod on the pavement and rests the basket on it. Mr Khan, who travels to Azadpur vegetable market every morning to buy the fruit, doesn’t have a “certificate” to sell. Although, he says, he has rarely been harassed by the police, he hopes his natural instinct to panic at the sight of a constable will end now.

The Bill, once it becomes an Act, will make street vending an organized trade. Each vendor will receive a licence. “It will enable him to conduct the business whether he happens to be stationed at a fixed place, or go from one weekly market to another throughout the week, or keep hawking across different neighbourhoods daily,” says Arbind Singh, coordinator and founder of the Delhi-based National Association of Street Vendors of India (NASVI), a federation of street vendor organizations, trade unions and non-governmental organizations that played an important role in bringing about the Bill.

Muhammed Shahabuddin hasn’t heard of the Bill. A hawker of brooms and wipers, which he arranges in a mutlicolour pattern on his bicycle, Mr Shahabuddin pedals across localities, stopping wherever he feels there is a possibility of a sale. I saw him outside the Chhoti Gumti monument in Green Park. “I’m coming from Vasant Vihar and Vasant Kunj,” he says. “I will now head to Saket.”

At a traffic light on Aurobindo Marg, a tired-looking Kalu is trying to sell roses to commuters in a rush. His wife is taking a break under a tree, while his 13-year-old daughter Jyoti is spraying water on fast-wilting flowers.

A few miles away in Nehru Park, the elderly Ram Niwas brings his bicycle to a halt. A large aluminium container is fitted on his bicycle’s carrier. Dressed in a red coat, he sells buttermilk. “I come daily from my village near Rohtak in Haryana,” says Mr Niwas, as his trembling hands pour the salted drink into a plastic glass. “I wake up at 3 in the morning when my wife Sheila and I start to prepare the buttermilk.”

Owner of five buffaloes, Mr Niwas travels to Delhi by train — along with his cycle and containers. Every morning he gets off at the Safdarjung railway station from where he pedals through the central districts. He returns home by 10pm. After hearing the implications of the Bill on the lives of vendors like him, he simply says, “Thank you.”

Nodding approvingly on the safe passage of the Bill, Muhammed Kasim, a barber who runs an open-air hair-cutting salon under a peepal tree in east Delhi’s Noida More, says cheerily, “I shave traffic police constables for free and I would continue to do so.”

Meanwhile, in a much quieter side lane in Khan Market, Laxmikant Shukla’s walking stick is making a rhythmic sound. He sits down to rest near the Puma showroom. His wife Indu, lounging at Gopal Mandir, across the road, comes over to give him a glass of chai. “Our children are studying but my husband needs somebody to look after him,” she says, “so I accompany him everyday.”

Commenting on the Street Vendors Bill, Mr Shukla says in English: “But I have never been harassed in Khan Market.”