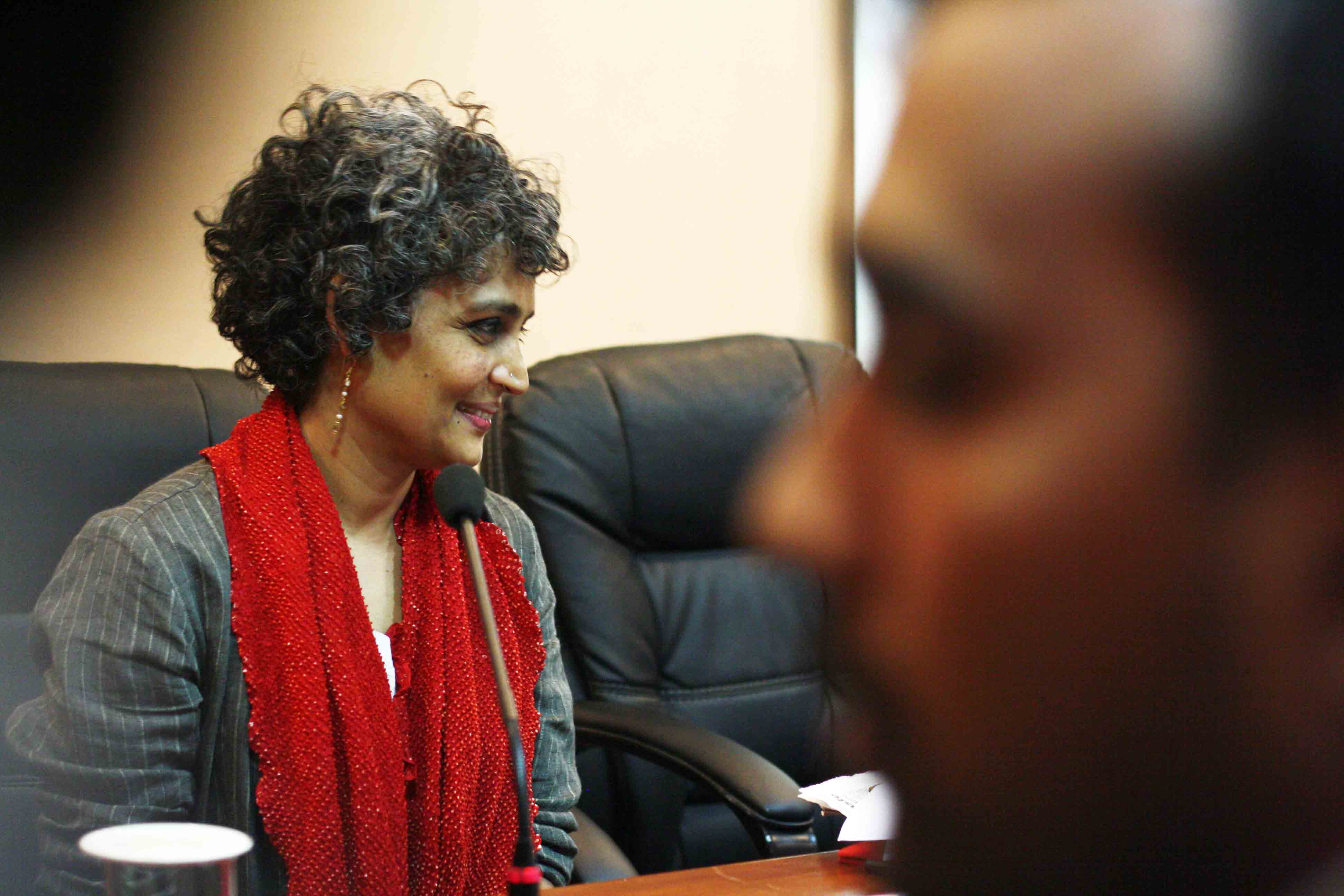 The author of The God of Small Things was talking on The Doctor and the Saint, her book-length introduction to Annihilation of Caste, the annotated edition of a radical speech written by anti-caste Indian statesman Dr B.R. Ambedkar.

A substantial part of Ms Roy’s discussion dealt with Mahatma Gandhiji’s years in South Africa and his attitude towards caste system during the freedom struggle. Though this section constitutes only a part of her essay, it makes for an extremely disturbing reading.

Despite being a privileged-caste Hindu, our understanding of Mahtama Gandhiji is that of a “great soul” who bridged the various divisions of the Indian society through non-violence and truth.

In The Doctor and the Saint, Ms Roy slices into this idea of a man whom we are tutored to consider as the Father of the Nation.

Indeed, Delhi’s biggest mischief-maker messes with quite a few national-level fathers and mothers while tracing the political lives of Gandhiji and Ambedkar. For instance, substantiating her argument about how “elite Indian Muslims, Sikhs and Christians all practices caste discrimination,” Ms Roy wrote in her essay’s footnotes:

“Here, for example, is Ismat Chugtai, a Muslim writer celebrated for her progressive, feminist views, describing an Untouchable sweeper in her short story, “A Pair of Hands”: “Gori was her name, the feckless one, and she was dark, dark like a glistening pan on which a roti had been fried but which a careless cook had forgotten to clean. She had a bulbous nose, a wide jaw, and it seemed she came from a family where brushing one’s teeth was a habit long forgotten. The squint in her left eye was noticeable despite the fact that her eyes were heavily kohled; it was difficult to imagine how, with a squinted eye, she was able to throw darts that never failed to hit their mark. Her waist was not slim; it had thickened, rapidly increasing in diameter from all those handouts she consumed. There was also nothing delicate about her feet which reminded one of a cow’s hoofs, and she left a coarse smell of mustard oil in her wake. Her voice however, was sweet.””

As you may sense, Dr Ambedkar’s Annihilation of Caste and Ms Roy’s The Doctor and the Saint are passionate and necessary documents that will deepen our understanding of India today.

Here are the opening passages of Ms Roy’s essay as excerpted in Caravan magazine.

ANNIHILATION OF CASTE is the nearly eighty-year-old text of a speech that was never delivered. When I first read it I felt as though somebody had walked into a dim room and opened the windows. Reading Dr Bhimrao Ramji Ambedkar bridges the gap between what most Indians are schooled to believe in and the reality we experience every day of our lives.

My father was a Hindu, a Brahmo. I never met him until I was an adult. I grew up with my mother, in a Syrian Christian family in Ayemenem, a small village in communist-ruled Kerala. And yet all around me were the fissures and cracks of caste. Ayemenem had its own separate “Parayan” church where “Parayan” priests preached to an “untouchable” congregation. Caste was implied in peoples’ names, in the way people referred to each other, in the work they did, in the clothes they wore, in the marriages that were arranged, in the language we spoke. Even so, I never encountered the notion of caste in a single school textbook. Reading Ambedkar alerted me to a gaping hole in our pedagogical universe. Reading him also made it clear why that hole exists and why it will continue to exist until Indian society undergoes radical, revolutionary change.

Revolutions can, and often have, begun with reading.

Ambedkar was a prolific writer. Unfortunately his work, unlike the writings of Gandhi, Nehru or Vivekananda, does not shine out at you from the shelves of libraries and bookshops.

Of his many volumes, Annihilation of Caste is his most radical text. It is not an argument directed at Hindu fundamentalists or extremists, but at those who consider themselves moderate, those whom Ambedkar called “the best of Hindus”—and some academics call “left-wing Hindus.” Ambedkar’s point is that to believe in the Hindu shastras and to simultaneously think of oneself as liberal or moderate is a contradiction in terms.

When the text of Annihilation of Caste was published, the man who is often called the “greatest of Hindus”—Mahatma Gandhi—responded to Ambedkar’s provocation. Their debate was not a new one. Both men were their generation’s emissaries of a profound social, political and philosophical conflict that had begun long ago and has still by no means ended.

Ambedkar, the untouchable, was heir to an anticaste intellectual tradition that goes back to 200–100 BCE. The practice of caste, which is believed to have its genesis in the Purusha Sukta hymn in the Rig Veda (1200–900 BCE), faced its first challenge only a thousand years later, when the Buddhists broke with caste by creating sanghas that admitted everybody, regardless of which caste they belonged to. Yet caste endured and evolved. In the mid-twelfth century, the Veerashaivas led by Basava challenged caste in South India, and were crushed. From the fourteenth century onwards, the beloved Bhakti poet-saints—Cokhamela, Ravidas, Kabir, Tukaram, Mira, Janabai—became, and remain, the poets of the anticaste tradition. In the nineteenth and early twentieth centuries came Jotirao Phule and his Satyashodhak Samaj in western India; Pandita Ramabai, perhaps India’s first feminist, a Marathi Brahmin who rejected Hinduism and converted to Christianity (and challenged that, too); Swami Achutanand Harihar, who led the Adi Hindu movement, started the Bharatiya Achhut Mahasabha (Parliament of Indian Untouchables), and edited Achhut, the first Dalit journal; Ayyankali and Sree Narayana Guru, who shook up the old order in Malabar and Travancore; and the iconoclast Iyothee Thass and his Sakya Buddhists, who ridiculed Brahmin supremacy in the Tamil world. Among Ambedkar’s contemporaries in the anticaste tradition were E.V. Ramasamy Naicker, known as “Periyar” in the Madras Presidency; Jogendranath Mandal of Bengal; and Babu Mangoo Ram, who founded the Ad Dharm movement in the Punjab that rejected both Sikhism and Hinduism. These were Ambedkar’s people.

Gandhi, a Vaishya, born into a Gujarati Bania family, was the latest in a long tradition of privileged-caste Hindu reformers and their organisations: Raja Ram Mohan Roy, who founded the Brahmo Samaj in 1828; Swami Dayananda Saraswati, who founded the Arya Samaj in 1875; Swami Vivekananda, who established the Ramakrishna Mission in 1897; and a host of other, more contemporary reformist organisations.3

Putting the Ambedkar–Gandhi debate into context for those unfamiliar with its history and its protagonists will require detours into their very different political trajectories. For this was by no means just a theoretical debate between two men who held different opinions. Each represented very separate interest groups, and their battle unfolded in the heart of India’s national movement. What they said and did continues to have an immense bearing on contemporary politics. Their differences were (and remain) irreconcilable. Both are deeply loved and often deified by their followers. It pleases neither constituency to have the other’s story told, though the two are inextricably linked. Ambedkar was Gandhi’s most formidable adversary. He challenged him not just politically or intellectually, but also morally. To have excised Ambedkar from Gandhi’s story, which is the story we all grew up on, is a travesty. Equally, to ignore Gandhi while writing about Ambedkar is to do Ambedkar a disservice, because Gandhi loomed over Ambedkar’s world in myriad and un-wonderful ways.