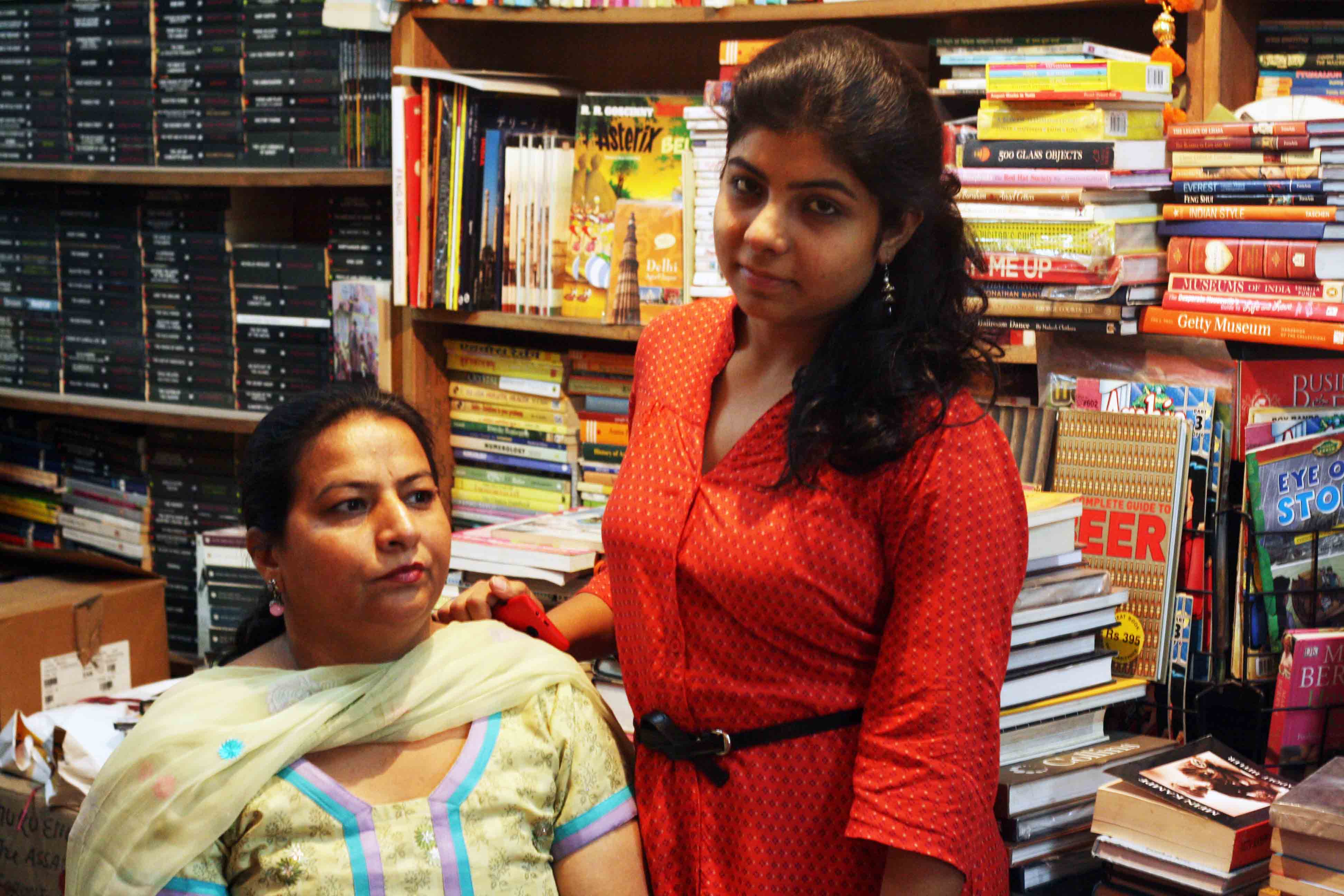 A homely Punjabi girl in west Delhi’s Rajouri Garden is dumped by her fiancé hours before the wedding. The shattered girl flies to Europe, becomes her own woman, and returns to west Delhi.

This was the plot of the Hindi film, the critically acclaimed Queen.

Like most girls of this neighbourhood, the happily married 27-year-old Minakshi Kathait grew up having dahi papdi at Atul Chat Corner and buying bright tops at Incense Apparel & Accessory, both popular landmarks in Rajouri Garden’s Main Market. But unlike Queen’s heroine — a type that has been lovingly nurtured in our films and in everyday banter among Delhiwallas — Ms Kathait doesn’t conform to the truism of a west Delhi girl: a naive woman with a Facebook account who speaks bad English, and aspires only to a mother-in-law and kitty parties.

“That’s not me,” says Ms Kathait, a law firm manager and life-long resident of the sneered-at Rajouri Garden, described by author Ruskin Bond in Tales of the Open Road as a “Punjabi colony” that has “no gardens and hardly any trees”.

“I was a hurdle racer,” says Ms Kathait of her time at St Cecilia’s Public School in neighbouring Vikas Puri. “I played cricket and watched soccer matches. Eight out of my 10 friends were male.”

Ms Kathait, a former journalist, is just an inch shy of being a six-footer and a bad model for any novelist or scriptwriter who aims for verisimilitude by glorifying Delhi stereotypes. Of course, she could be seen as the exception who proves the rule. Just as the European self-discovery of an embarrassingly naïve Rani Mehra in Queen is more fiction than fact. Just as the whisky-drinking mother in the 2012 comedy Vicky Donor does not represent all the middle-class mothers of south Delhi’s Lajpat Nagar.

In search of the perfect mould for Rajouri Garden and Lajpat Nagar women, The Delhi Walla ended up meeting three who have defied generalization. In our anti-women society, their complicated lives give us a glimpse of a churn, albeit slow, in the heart of Delhi.

“The garishly dressed image of a Rajouri Garden girl (though that aspect was not depicted in Queen) has some truth in it,” says Ms Kathait. “Here, in our part of Delhi, you find many of us wearing sunglasses inside the Metro.”

Queen’s costume designers Manoshi Nath, who grew up in west Delhi, and Rushi Sharma, “a very very south Delhi girl”, did their homework by scampering around west Delhi bazaars with cameras, taking photos of girls who seemed to be “not liberated, not free and talked in a restricted manner”. In a conference call, the Bombay-based designers described visits to polytechnics, where women kill time till marriage by pursuing diploma courses in fashion photography and Web animation. Our average, conventional, not brilliant Rani does not epitomize a west Delhi girl, the designers say, but she is a category that can be found anywhere and in all of us.

If you want to spot such a type in Rajouri Garden, just search for a girl dressed like Rani — a boxy kurta, jeans with appliqué designs on the thigh and a handbag hanging from the shoulders like a weapon.

Sitting in the drawing room of her lower income group (LIG), Delhi Development Authority (DDA) flat, Ms Kathait is dressed in blue denim, her long hair streaming down her shoulders. Confessing that she occasionally comes across sightings of behenjis — meaning “women whose work-day accessories consist of jewel-studded sandals, floor-length anarkalis, gaudy handbags and big earrings” — Ms Kathait declares that she too was one such creature. “I wore pink T-shirts and those really shiny jeans. But then I got a boyfriend…he has a great sense of style and he changed the way I look.”

That boy later became Ms Kathait’s husband. Showing me photos of her old days, when there was only one mall in Rajouri Garden, she says: “The new style is only the result of making better choices in clothes. I was still the same me when I dressed like a behenji.”

Ms Kathait grew up in a household of working parents. “My father was an accountant in a government department and my mother, a schoolteacher. A graduate in Sanskrit, she was not the only working woman in our neighbourhood. The perception of Rajouri Garden women as home-bound is only partly true. They also go out in the world. Take my neighbours. Savita has a job at Canara Bank. Mrs Saraswat teaches at a posh school on Lodi Road. Manorama is employed at an event management company. Mrs Goswami, I think, is a clerk at Rail Bhavan. Many, many housewives in Rajouri Garden run boutiques and parlours from home.”

In Vicky Donor, the whisky-drinking mother, Dolly Arora, owned a beauty parlour in her house in Lajpat Nagar, a Punjabi-dominated locality in south Delhi that has lately been portrayed in cinema for its supposedly loud and happy people.

In this neighbourhood, famous for its bridal-dress stores, footwear stalls, henna parlours and Chinese chaat, lives Komal Madaan, a wife and mother of two teenagers. She too works, both at home and outside it, but has never tasted alcohol. In her 40s, she is a much softer, gentler version of the brash Lajpat Nagar Punjabi mother in the 2012 film Cocktail.

Ms Madaan is attending to customers in her shop, Anjali Book, in Lajpat Nagar’s Central Market. As a home-science student in Punjab, her ambitions fit the clichés many Delhiites attach to the Lajpat Nagar woman. “All I dreamed of was cooking, washing and taking care of my husband and children,” she says, sitting amid cardboard cartons filled with books.

Dressed in a lemon green salwar-kameez suit, Ms Madaan talks of a life that should be considered by our experimental film-makers. “I moved to Delhi after my marriage. My husband separated from his family following a dispute. He set up a pavement bookstand here in Lajpat. Since he was alone, he told me to assist him at the stall. I had never, ever talked to men other than my relatives, and there I was, standing on the road and interacting with gents. I was so ashamed that I temporarily broke all contact with relatives. I also had to look after the children and do the household chores. I felt utterly alone and had no one with whom I could share my anguish, not even with my husband. I had no choice but to adapt.”

The shop has moved to a more permanent arrangement. Ms Madaan still spends most of the day at the shop. “I arrive at noon, carrying the lunch that I share with my husband. I return home at 9pm, and then cook the dinner… I hope my daughter enjoys more freedom.”

A first-year political science student at Delhi University’s Gargi College, Janie, Madaan’s 20-year-old daughter, has a preference for “suits with neon borders”. Her best friend is the neighbour’s son. She often travels with him and other friends to north Delhi’s GTB Nagar to drink chocolate milkshakes at her favourite Big Yellow Door restaurant. Janie buys junk jewellery in Sarojini Nagar and kurtis, inspired by Masaba Gupta’s “quirky” designs, in Lajpat Nagar. She discusses theatre on the terrace of the Indian Coffee House in Connaught Place. Every morning, while commuting to college, she is ready to “kick and punch” the men on the always crowded bus, No. 413. She is not sure of what she wants to be in life, but says, “Unlike mummy, I would like to have an equal say.”

Her struggles are just starting.

Janie is not permitted to wear short skirts outside the house. She cannot hang out with boys who are not known to her parents. Unlike her younger brother, she has to be back home by 9pm.

Betraying signs of mutiny, Janie asks, “Why should I take no for an answer when men do not?”

Calming down a minute later, she looks at her mother, saying, “I’m more aware of my options and what I can do with them than mummy was, so I’m determined to have a different life than hers.”

This girl from Lajpat Nagar is already a woman.

In Queen, the heroine discovers herself only after adventures in Paris and Amsterdam. Of the three women I met, none has ever been abroad. If they ever get there, it’s likely to be for leisure. Delhi’s neighbourhoods are enough to prepare them for life.