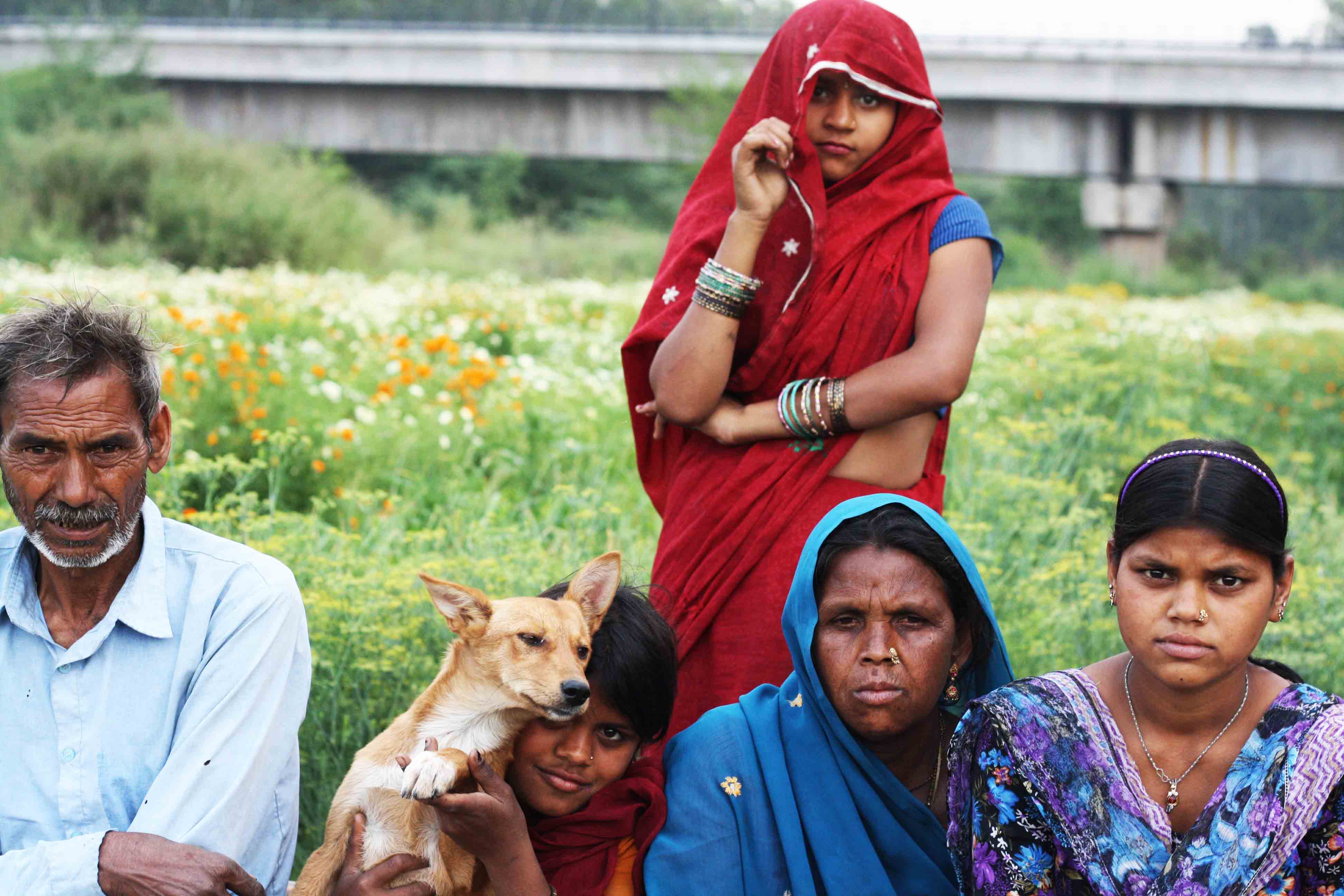 This is beyond belief.

The hut stands under a shade-giving mulberry tree, beside a field of red roses. The walls are thatched and the cow-dung flooring is polished smooth. Mr Dorilal is smoking a beedi. His wife, Ramkali, is patting the buffalo. Bhu Devi, one of their many children, is playing with a plastic doll on the string charpoy. The diesel-fuelled water pump is humming. The rural idyll is shattered by the noise of wind gushing, almost like a tremor. It is a Metro train rushing past just beyond the white daisies.

These fields of wheat, forests of eucalyptus and groves of marigold lie in the heart of smoggy, congested, concrete Delhi. The distant towers of ITO look as outlandish as the caged commuters of the Metro. The real world is made of wildflowers, mud paths, tilled fields and a sacred river. This is how it appears from Mr Dorilal’s home, and perhaps also from hundreds of other secluded huts that dot the eastern banks of the Yamuna in Delhi.

These fertile farmlands span the 22km course of the river as it flows through the city — from Wazirabad in the north to Okhla in the south. Most of the farmers either rent these acres from the owners who live elsewhere, or act as sharecroppers, dividing the earnings with the absentee landlords. Some have been ploughing these fields for more than a generation; others have started more recently.

Mr Dorilal, 65, arrived a decade ago from Etawah, a rural district around 200 miles south-east of Delhi. He says he lives off the 4-bigha land he rents for 8,000 rupees per bigha a year, growing vegetables such as spinach, eggplant and radish, and flowers such as dahlia, rose and marigold. Indeed, this part of the riverbank has scores of picturesque marigold fields, so full of flowers that you half expect a Bollywood couple to emerge lip-syncing a love song.

The gentle-mannered Mr Dorilal does not miss Etawah. “It’s like my village is here,” he says. “There’s jungle all around. You hear the nilgai at night. Kala naag (snake) visits regularly. Deer come in the rainy months. And we have no power and no running water.”

There’s also no cooking gas. Mr Dorilal’s courtyard has two earthen stoves and a grinding stone bound to the mud floor — the way our water purifiers are hitched to kitchen walls. “We use twigs of marigold, rose or eggplant as firewood,” says Ramkali. “Sometimes their scent mixes into the food.”

Of course, the family eats the vegetables it cultivates — that is, whatever is left after selling the produce at the Azadpur subzi mandi, one of the city’s wholesale bazaars for fruits and vegetables.

According to the blog Urban Agriculture in Delhi, started by Denver-based PhD student Jessica Cook, who is leading research on the Capital’s Yamuna-side farm fields, the majority of farmers like Mr Dorilal have less than 10 bighas of land. The blog also says: “Delhi farmers are able to grow nearly year-round. In October and November they plant hardy winter crops, including cauliflower and dark leafy greens. Summer crops, such as gourds, eggplant, okra, and chillies, are planted around March. Some farmers also choose to plant rice in June, right before the monsoon months… Crop productivity is high enough to support most farmers and their families year round, even during the monsoon season, and few farmers look for other means of employment in between growing seasons.”

Mr Dorilal and Ramkali’s hut houses their four daughters, two sons and daughters-in-law. There are also seven goats, one buffalo, and two dogs — Julie is napping under the charpoy, and Sheru is ambling thoughtfully along a flower hedge.

While his sons work the fields, Mr Dorilal’s young daughters, sadly, don’t attend school. “It is across the bridge,” says Ramkali, waving vaguely towards an unseen signpost, as if it marks the end of the planet. “Shall we cut the weeds or spend the day escorting our lalliya (girls) to and from school?” she asks in a bemused tone.

Tucking a rose behind the ear of her doll, little Bhu Devi shyly says, “A madam comes to teach (farmers’) children in a guava orchard — it’s just there — but I don’t like studying.” The girl’s thin arms are decked with gold-coloured bangles; her mother purchased them from a bangle-seller who had passed by some weeks ago.

The guavas grown in the riverside fields dutifully appear on the roadside stalls of Lok Nayak Setu, the bridge nearby that links Laxmi Nagar to ITO. But do the conscientious commuters who check the fruit for their freshness know that it was plucked off a tree that stands too close to the infamously toxic Yamuna?

In its 2012 study Yamuna, The Poisoned River, The Energy and Resources Institute, or Teri, reported: “During the monsoon season, the river water (in Delhi) floods the land and contaminants reach the soil. The vegetables growing in this soil absorb the contaminants. Vegetables grown in the floodplains, namely spinach, cauliflower and radish, were tested for the contaminants. The concentration of heavy metals was found to be the highest in spinach, followed by cauliflower, and the least in radish.”

The Yamuna is a 10-minute walk from Mr Dorilal’s fields. The silver-coloured chimneys of the power plant on the other bank are mirrored in the black waters. A lean young man appears carrying a large sack on his shoulder — it is filled with empty plastic bottles. A garbage collector, Mr Raju has his wet trousers rolled up to his knees. He knows the secrets of the Yamuna.

“They must have opened the gutters at the ITO,” he says. “The current is faster today.” Wading gingerly into the river, he says, “I search for gold and silver coins that people throw from trains (as an offering to the holy river). The extra income comes when the police ask me to dive for dead bodies.” Pointing to a fenced strip of land, Mr Raju says, “I’m stealing a few tomatoes from there.”

Besides vegetable farms, this area has more than a dozen flower nurseries, some of them almost clinging to the Yamuna Bank Metro station, where the Blue Line coming from Connaught Place bifurcates — one going towards Noida, another to Ghaziabad—areas adjoining Delhi.

The day is ending and Mr Dorilal has finished gathering a harvest of marigold. It’s lying in his courtyard. The next morning one of the sons will carry the bundle to Fatehpuri in Chandni Chowk. “These flowers sell the most during navratri,” he says, referring to a nine-day Hindu festival. “The wedding season in winter is another good time.”

The sun is beginning to set. The orange sky is streaked with darkish rain clouds, though the monsoon is months away—that is when these flatlands come under water and Mr Dorilal takes his family to higher ground. They live as temporary refugees by National Highway 24 during this season.

In another hour, it will turn dark, and this peasant family, like millions across the country, will sit down for dinner. Soon afterwards, they will be fast asleep, though the bridges over the Yamuna will still be jammed with rush-hour traffic.