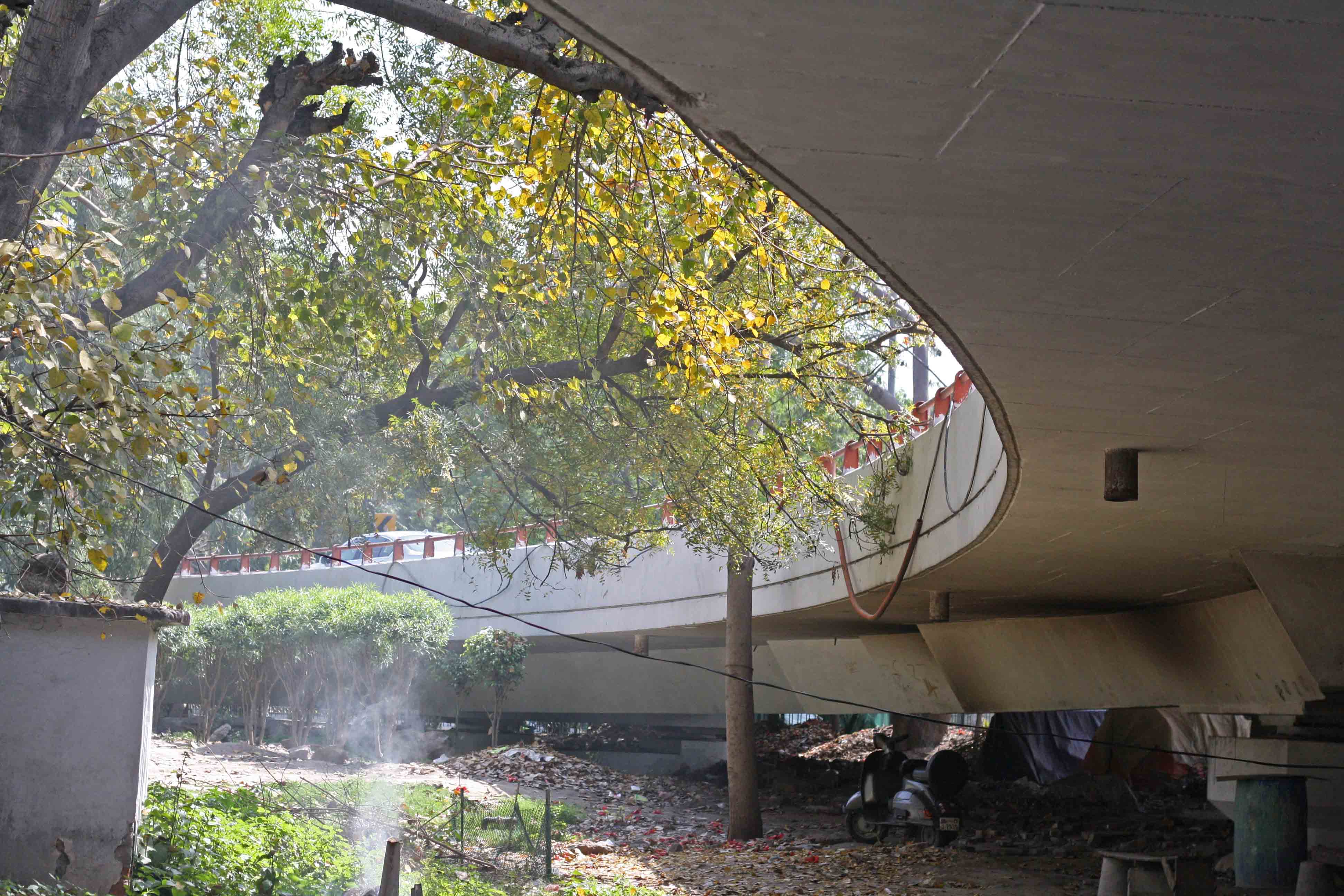 Delhi has 90 flyovers. And some of them play a role beyond ensuring the smooth flow of traffic.

Take the ITO-Ring Road flyover. The IP Estate police station is located underneath it — as is a tea stall, whose grim-faced owner, Shankar Das, makes chai for policemen and visitors whose relatives are locked up in the police station.

The tea stall does not appear to be doing brisk business at the moment; perhaps the crime rate is down. While Mr Das awaits a customer, his three-year-old daughter Aanchal is playing with an empty steel bowl, and wife Seema is staring at an abandoned, dilapidated jeep beside the stall. Damaged possibly in an accident, the vehicle has been dumped there by the police.

It’s eerily silent in this underworld — the sounds of cars and autorickshaws coming from the “roof” feel like signals from another planet.

Or take the flyover near the Sarai Kale Khan Interstate Bus Terminus, used by buses from Madhya Pradesh and Rajasthan. The new arrivals from these states gather under this flyover, along with their babies and bundles. Here they wait to be picked up by building contractors as daily-wage labourers for real estate projects in the Capital and its surroundings.

Two such migrants are absorbed in watching the cars speeding by. An elderly woman is looking intently at The Delhi Walla’s camera. A thin girl is combing her doll’s blonde hair. Puroshuttom Goyal, a contractor from Fatehabad, Haryana, is looking for “strong bodies”, however. “I need 20 people for a week,” he says. “We’ll give each labour (sic) Rs.250 per day.”

Mr Goyal’s mini-truck is parked nearby to transport the “haul”.

The Defence Colony flyover in south Delhi runs above the Defence Colony Flyover Market, which houses banks, wine shops, travel agencies, eateries, boutiques, and the city’s most famous dog clinic-cum-shelter, Friendicoes. “The bridge came up in the 1960s. The market came up in the 1980s,” says Sukhbir Singh, a mechanic at Lifestyle Marketeers, a teeny-weeny shop stocked with grandfather clocks. “The flyover trembles throughout the day (because of the traffic) and so does our roof,” he says.

A dark, dingy, cobwebbed corridor runs through the market; many shops lie permanently closed. In one boxy office, a man is sleeping on his desk.

Miles away in the west of the city is the Shadipur flyover. Under it lives Meena Begum, with her TV, cooler, plastic flowers and a child. Her husband is in Tihar Jail — she says the police arrested him after a drunken brawl. Meena Begum, who works as a maid in a Patel Nagar bungalow, has been living under the flyover for five years. A railway line and a Metro track run on either side of her plywood shack. “This is my house,” she says forcefully, as if by merely uttering these words she’s demarcating her territory.

The long flyover in Palam village, near the airport, shelters a traffic crossing that could well be the setting for an R.K. Narayan story. The area landmark is the statue of a kingly-looking man. On one side of it stands the middle-aged Dandraj, who sells papayas. On the other, the elderly Chhotelal, who sells fruit chaat. Throughout the day shoppers keep coming from across the road — a bazaar lines both sides of the flyover — to gather near the statue and chit-chat.

Pointing to the figure, Mr Dandraj says, “He is Maharaja Agrasen, the lord of the Baniyas.”

A traffic stretch under the Safdarjung Airport flyover too is a shrine— but to an embarrassment. The underpass pillars are plastered with tiles depicting weightlifters, wrestlers, cyclists and footballers. These exhibits were commissioned to beautify New Delhi for the 2010 Commonwealth Games, better remembered today for corruption scandals.

Going down this memory lane is better avoided.

Look before you leap