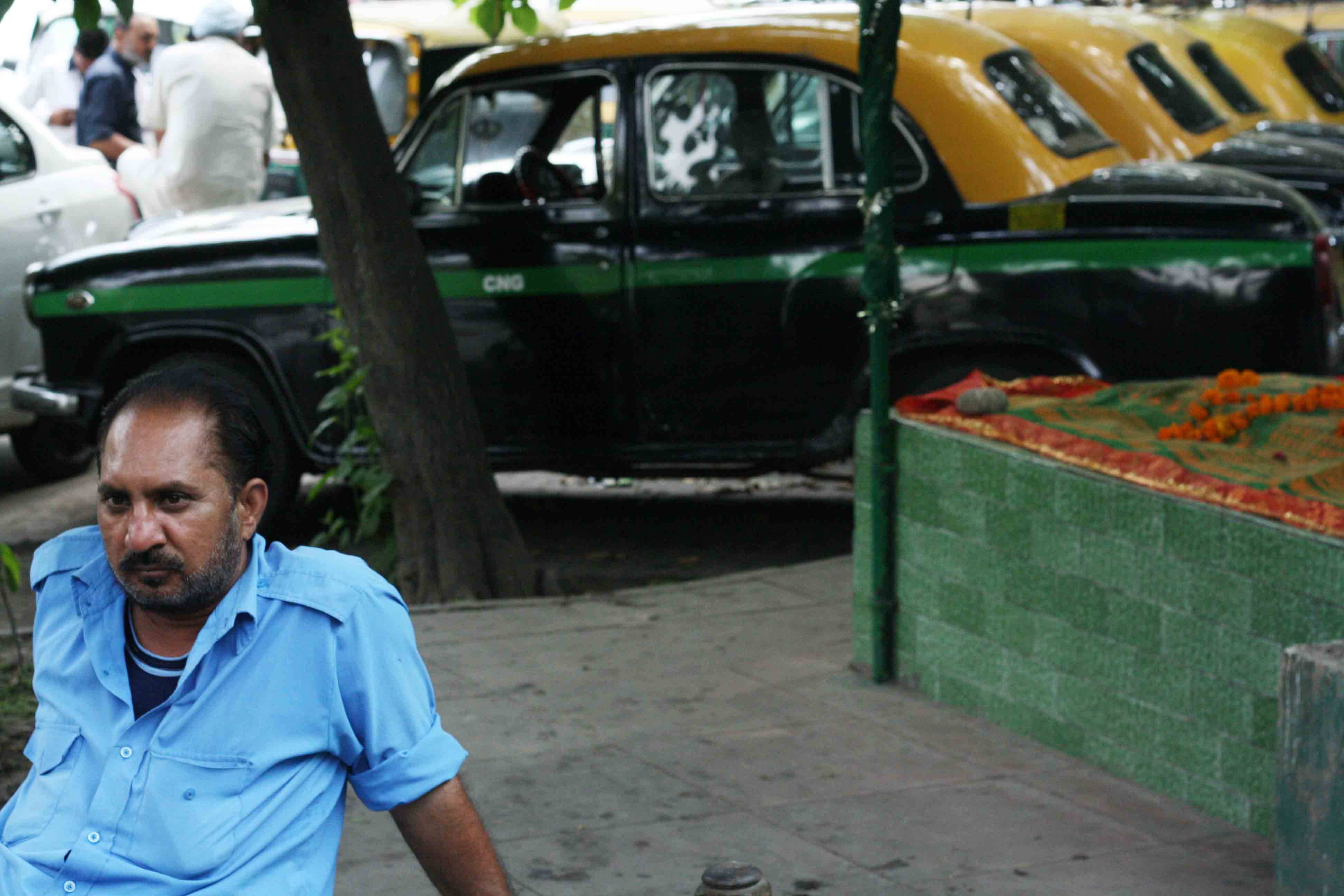 Just the place to while away an evening—string cots under mulberry trees, cold water in earthenware pots, a table fan to keep the flies away, and if it rains, a cabin for shelter.

You need to be a cab driver to lie on an inviting cot. For this is the Anand Taxi Stand on Subramania Bharti Marg in central Delhi. If it were not for the black and yellow Ambassadors, this roadside landmark could have been mistaken for a shrine — with multicoloured cots set out beside the open-air tomb of a Sufi saint.

The 50-year-old taxi stand has 10 kali-peelis, driver-speak for the aforementioned cars, and a few DLYs, the slang for taxis with an all-India tourist permit. The stand owner rents these cabs to his drivers, who share their earnings with him.

“Most have gone here and there to kill time, but no one is out driving,” says Sardar Sukhdev Singh, an elderly driver whose natural dignity is enhanced by his pink turban. “There’s hardly any work. We have been defeated by the (Delhi) Metro, the AC buses and the radio cabs. Our business is only 40% of what it was five years ago.”

This sentiment is shared a few miles away at the taxi stand on Janpath. The scene says it all. While the construction of an underground Metro station is reaching completion, a dozen kali-peelis are lined up beside a rundown cabin. Towels are spread out on the cars’ steering wheels and drivers are sleeping in the rear seats. Waking up from his afternoon slumber, Dalbeer Singh rubs his eyes and says: “Last night, I took a customer to Qutub Enclave. Since then, I’m still waiting for my turn.”

The taxi stand, with 30 cabs, operates on a turn-by-turn basis; sometimes more than a day passes before a driver gets another customer. “People now use Meru,” says Dalbeer, referring to a radio cab service.

Unlike Bombay or Calcutta, where hailing cabs is a daily routine, Delhi doesn’t have an affordable taxi culture. We hail autorickshaws and hire a cab only to go to the railway station, airport, or for some formal occasion. Yet many households used to have a functional relationship with their neighbourhood stands; some had favourite drivers. A few people have even written about them.

UK-based poet Zoë Skoulding composed a poem titled Taxi Driver, Delhi (see at the bottom). Congress party politician Louise Fernandes Khurshid made the cabbie the protagonist of her debut novel Travails With Chachi: Conversations With a DLY Taxi Driver. In fact, several writers have spiced up their prose at the cost of our cabbies.

This is William Dalrymple describing his taxi driver Balvinder Singh in City Of Djinns: “A Punjabi Sikh… he utters incoherent whoops of joy as he drives rickshaws on to the pavement or sends a herd of paper boys flying into a ditch. He leaps out of his taxi to urinate at traffic lights and scratches his groin as he talks. Like Essex Man, he is a lecher.”

Talking of her days in Delhi in the 1980s, author-journalist Madhu Jain says: “Today it’s downmarket to show up at a party or embassy soiree in a black-and-yellow but then they spelt luxury. You called a cab from a known taxi stand and you kept the cab.”

“My first taxi guy was a bit of a loveable rogue,” says Andrew Buncombe, a foreign correspondent who has been living in Delhi for seven years. “D.K. Yadav and his taxi stand occupied a scruffy scrap of land close to my first apartment in Vasant Kunj. There was an office, rarely used, and a tent in which the drivers slept on charpoys. In those first few chaotic months they befriended me, happily roused from their sleep at any time of day or night, readily leaping into various journalistic ‘goose chases’ across the city, and in the evening insisting that no journey should be undertaken before we passengers had taken a shot of Old Monk or McDowell’s No.1.”

Our traditional rapport with the taxi stand was seriously challenged when Delhi got its first private radio cab service in 2006. With its fleet of 250 taxis, EasyCabs gave us a taste of hassle-free commuting—an AC car with a tamper-proof meter, a GPS tracking system and a driver with whom we didn’t have to share a peg or bargain for the fare. Today, the Capital is serviced by half-a-dozen radio cab firms. According to the Delhi government’s transport department, the city has more than 20,000 radio taxis—the kali-peelis number 9,000.

Waving towards Subramania Bharti Marg, Sukhdev, who has been at the Anand Taxi Stand for 30 years, says: “I learnt driving on this road. During the 1980s, we had telephone calls constantly coming from (nearby) Rabindra Nagar, Kaka Nagar, Pandara Road and Golf Links. In those days you only saw bicycles or bikes outside the bungalows. That changed when Maruti (car) arrived. Today, our phones barely ring.”

Sukhdev is joined by his much younger colleague, Gagandeep Singh, who points to an adjacent flower nursery, saying: “I’m doing a diploma in watching the women who go there to shop for plants. I’ve made four categories—good, nice, very nice and very very nice.”

But Gagandeep hasn’t got a girlfriend. He is not even sure he will marry. “No father would give me his daughter,” he says. “Business is so low and what I earn anyway goes to my bedridden papa in Punjab. Before I could settle down, I need a room to keep my wife.”

Why not get a radio cab?

Grinning, Gagandeep says: “The company makes them run like asses from one corner of Delhi to another. That’s no life.”

“In the evening, I think of papa and get stressed,” says Gagandeep. “So I drink until I fall asleep.”

A lot of cabbies in Delhi, Gagandeep says, kill their “tension” each night by resorting to cannabis and opium.

“We drivers are facing such bad times that if we don’t get drunk, we are not able to sleep,” says Sukhdev, who looks so stately that it is hard to imagine him drunk. “I myself need ACP every night,” he adds, referring to Aristocrat Premium Whisky.

Until a few years ago, Delhi’s cab stands were regularly replenished by boys from Punjab and Himachal Pradesh. For some reason, most drivers hailed from these two states, and it was their cousins, sons and nephews who would, in turn, be absorbed into the cycle.

This flow is getting sluggish.

“Fewer boys are coming from Punjab and Himachal,” says Subhash Chandra Thakur, Gagandeep’s friend from Punjab, who has moved up in life with a chauffeur’s job at a five-star hotel. “Better schools are opening up in our villages and parents are becoming aware that it is wiser to persuade sons to get a good education than send them young to Delhi for low-wage drivery (sic).”

By now it is dark. In the past few hours, the silence of the taxi stand’s phones hasn’t once been broken by a customer’s call. Gagandeep leaves for a walk to India Gate. A traffic constable stops by. Sitting on a cot, he starts talking on his mobile — his banter suggests he is chatting with a lover.

After lighting the lamp that hangs on the Sufi saint’s tomb, Sukhdev says, “My son Shinder Pal is studying BSc (sic) at Khalsa College in Tarn Taran (Punjab). As soon as he gets a job, I’ll return home. I’ll also quit ACP.”

He does not drive, but swerves,

every movement an avoidance of truck,

He has learnt how to breathe

in this substance which is not air

but something grey and choking

how, when the owner of a towering four-by-four

shakes his fist and shouts

through the open window,

to raise one hand in blessing, mutter:

[From The Mirror Trade, published in 2004 by Seren Books.]