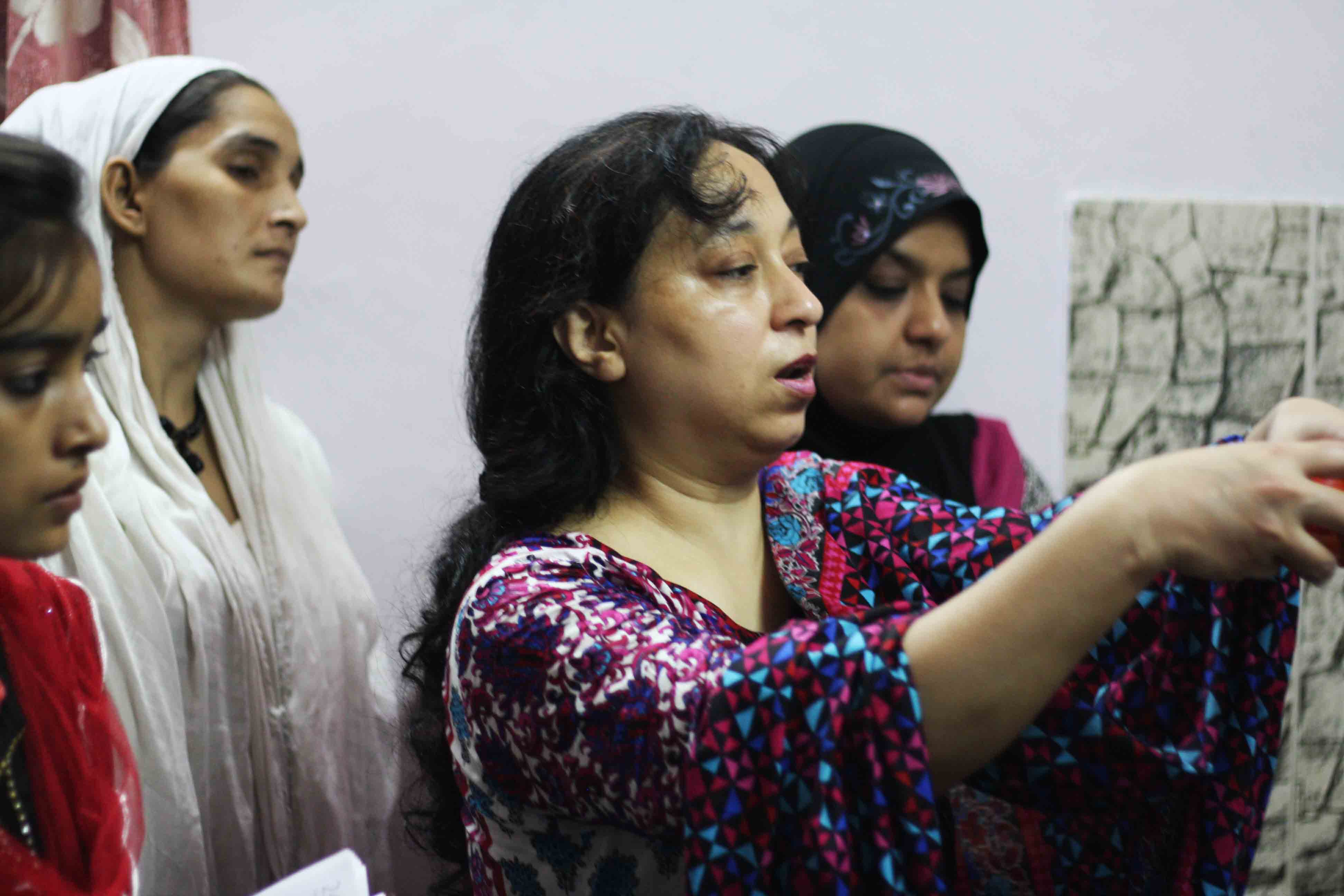 The room is a humble private apartment, with a mattress on the floor, a small, flat-screen TV on the wall, and a refrigerator beside the door. Here the women of Old Delhi learn to prepare “new kinds of dishes that will turn you into your family’s expert chef”.

This is what Tabassum Gazi is promising on banners put up in parts of the historic Shahjahanabad. The 30-year-old single mother’s cooking classes detail the art of Pakistani, Afghani, Saudi, Chinese, Italian and Russian cuisines to locals whose kitchens are more accustomed to Mughlai recipes.

“Each area in Delhi is distinct in food preferences, and so not only does the restaurant market differ, but home cooking too differs from place to place,” says food columnist Anoothi Vishal, who curates community cuisines in the Capital. “Gurgaon is home to young professionals. Making sushi is not out of place, and cuisines such as Thai, Moroccan, using authentic Korean and Italian ingredients in one’s kitchen, all have an aspirational value. South Delhi is also getting adventurous. The experiments in the upper middle-class homes there range from takes on regional Indian cooking styles such as Chettinad or Kashmiri to Mediterranean, etc. The Walled City remains somewhat ghettoized.”

That could be changing, even though Ms Gazi’s two-year-old cooking classes are the only ones of their kind in the area. A handful of housewives intermittently conduct classes in their homes, but they teach local food preparations. Ms Gazi charges 2,000 rupees for a month-long course in which students learn 30 dishes chosen from a list that she provides. A batch of eight women recently completed their lessons, and she is now advertising through banners and word of mouth to enrol a fresh set.

Ms Gazi has, till date, taught six-seven batches of 10 students each. The next group will continue to explore new flavours in this sparsely furnished corner of her home. Part of a dilapidated mansion that she inhabits in Gali Pahari Wali with her elderly parents, six brothers and a young son, the most striking item here is the cutlery set. “My jiju (brother-in-law) sent it from America, he lives with my sister in Dallas,” says the gentle-voiced Gazi, whose every utterance ends with the pious Inshallah (God willing).

The legendary American chef, Julia Child, spent years eating out in Paris before daring to teach boeuf bourguignon to her fellow countrymen. Ms Gazi has spent almost her entire life in Old Delhi, but has not dined even at Karim’s, the world-famous Mughlai eatery that is a 15-minute walk from her home. She grew up in a conservative milieu where women live in purdah and rarely step out unaccompanied. Not surprisingly, Ms Gazi found her calling in a foreign country — much like Ms Child (though the latter’s circumstances were completely different).

After her wedding to a Karachi shopkeeper, Ms Gazi settled in Pakistan. Though the couple separated a few months later, she did learn new twists to familiar dishes there. “Sindhi biryani demands a great amount of green spices such as coriander and mint, and you also have to add plums,” she says. “Pakistanis make coal chicken by roasting the bird on charcoal. Their haleem too is different from ours, so mushy that you wouldn’t know you were eating a chicken or a goat. Kata-kat is made by mixing kaleji (liver) and bheja (brain). Zinger burger has roast chicken between the buns.”

Farah Naz, who lives near Jama Masjid, learnt these Pakistani specialities in Ms Gazi’s classes. “I never knew the existence of these dishes,” says the 24-year-old. “The green chicken tastes so different from all the chicken dishes I make at home. Next month I will be learning Italian khana (food) from Tabassum baji (sister).”

Delhi’s original Julia Child was the iconic Mrs Balbir Singh. One of the earliest cooking teachers to translate Western cuisines — English-style cakes, for instance — for Delhiites, Ms Singh began her home-cooking classes in the 1950s upon her return from London, UK. Baking and cooking classes teaching people Indian-style Chinese and Italian became popular in Indian homes elsewhere during the 1970s-80s, observes Ms Vishal.

The turning point in Ms Gazi’s life was a 2012 trip to Dubai, where her restaurateur uncle educated her on culinary intricacies. “Chacha taught me that Saudis like white gravies and use crushed black pepper instead of red chilli powder,” she says. “Afghanis are the same as Saudis except that they want dry fruits in their food. Russians use lots of mayonnaise…”

Upon returning from Dubai, Ms Gazi decided that her cooking skills (empowered with tips on Italian and West Asian cuisines) could find a market in the Mughal-era quarter. She was dependent on her parents for household expenses, but she believed that her skills could help her become financially self-sufficient.

“Gazi’s classes tell us more than just about the changing taste of Old Delhi,” says Urdu poet Iffat Zarrin, who lives in Gali Hakimwali and often composes feminist poems. “Our women are trying to get out of their enclosures. They are curious about the world and want to experience it, even if through nothing more than by cooking foreign dishes.”

It is tempting to fall for a story of tradition-bound women finding freedom by adapting to new foods, but the reality is more utilitarian. Ms Gazi says most of her students happen to be girls of marriageable age wanting to cook “fancy” dishes to impress their future in-laws. However, her culinary school is one-of-a-kind in Old Delhi — a reflection of the area’s conservatism in matters gourmet.

It needed much legwork for The Delhi Walla to find a housewife as much at ease with penne pasta as with Mughlai paya. Sheeba Khan, a mother of three, is celebrated in all the houses surrounding Kucha Chelan’s Keekar Wali Masjid mosque for her pizza, Chinese fried rice and sandwiches.

Many of us will find these items as uneventful as the yellow dal but cooking them up in a traditional Walled City kitchen is almost revolutionary. “Most Muslims here are still stuck on biryani and korma and don’t want to experiment,” says Ms Khan, who educated herself in “foreign food” during her eight-year stay in Bombay, which was “more open for us women than Purani Dilli can ever be”. She adds, “A few of my friends in the neighbourhood now often ask me for recipes of snacks like non-veg club sandwich.”

Ms Khan’s husband, Arshad, says: “It is still early but people are showing interest in making dishes that they did not grow up with. I will say that serving home-made macaroni at breakfast represents a critical shift.”

Macaroni, of course, is sold in Khari Baoli’s wholesale grocery market, where it fills up gunny sacks, alongside basmati and rajma.

Momentarily charged up by our conversation, Ms Khan’s teenage daughter proclaims with moving earnestness: “The more pasta a woman makes, the more liberated her household becomes.”

In that case, how progressive will she find Ms Gazi’s students, who show more enthusiasm for Pakistani dishes?

“Pakistani food is similar to ours but slightly different, so there is a feeling of both familiarity and newness,” says Ms Gazi.

Expounding on how she adapts Italian recipes to Old Delhi’s halal kitchens, Ms Gazi says, “If the recipe asks for wine, I take out my bottle of sirka (vinegar) or apple juice.”

It is possible that a decade later, Old Delhi’s home kitchens will be like their counterparts in other parts of the city. Hopefully, the gains will be worth the loss. Already, the charming food tales of old times are acquiring mythical proportions. Author Sadia Dehlvi, who conducts informal classes on Mughlai cuisine in her central Delhi apartment, wrote longingly of the food stories of her Walled City family in a 2001 article titled Dilli Ka Dastarkhwan (The Tablecloth Of Delhi), which was published in a Delhi anthology, City Improbable, edited by the late Khushwant Singh: “What we knew as chapatis are now called roomali rotis…because the rotis are as thin as handkerchiefs. Dilliwalas find this name rather obscene as roomali is the term used for the small piece of cloth cut in a diamond shape, used in the crotch area to attach the seams of the two legs of pajamas and shalwars…”.

Mercifully, centuries-old customs do not fade quickly. The fasting month of Ramzan is starting tomorrow. The evenings will be redolent with the scents of typical Old Delhi delicacies such as kebabs, koftas and kheer. Having the instincts of a smart entrepreneur, Gazi also embraces the conventional. “I will soon have a new batch. Some of the girls in it will obviously want to learn Ramzan snacks, Inshallah.”