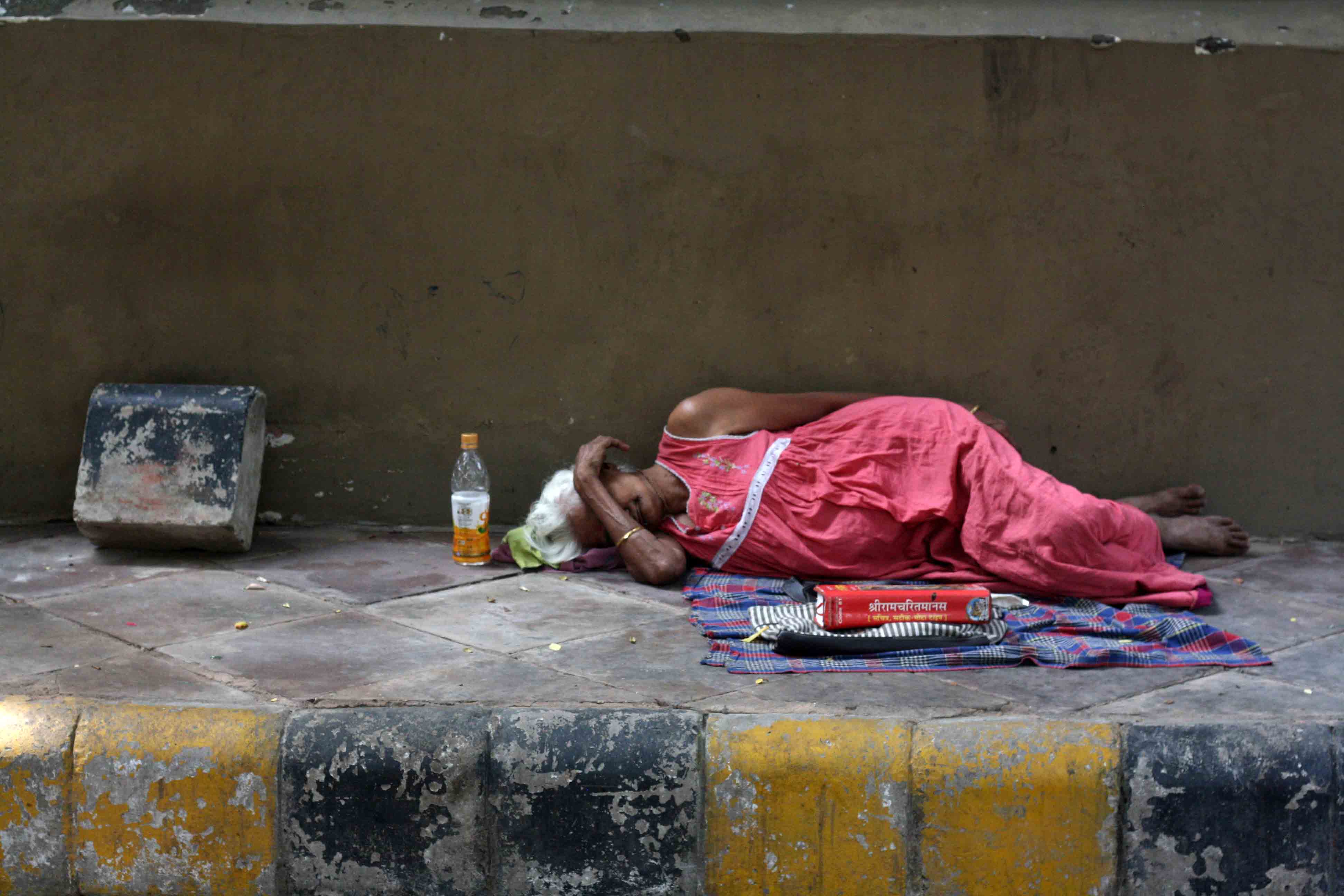 Every morning she reads aloud passages from the sacred Ramcharitmanas; her head rocking back and forth in tune with the cadence of the Awadhi dialect verses.

The white-haired woman is a new addition to the sights and sounds of a side lane that connects Barakhamba Road to Kasturba Gandhi Marg in Delhi’s Connaught Place. Clothed in either a blue sari or a pink gown, she can be seen sitting on the footpath from 9-11am, with the epic poem on her lap.

Office-goers rush past her. A few glance at her, some stop momentarily, charmed by her mellow recital. A very few put a coin or two in front of her. She seems calm, if a little tired.

With her gold-coloured bangles, earrings and a tulsi bead necklace, this elderly woman looks like the neighbourhood grandmother who watches soap operas, makes pickles, and reads the epics. But she is without a home.

The Delhi government’s Homeless Survey 2010 mapped 67,151 homeless people — the real figure, of course, may be much higher. Twenty-five per cent of those surveyed were found in the central district that includes Connaught Place. Women made up 7-10% of the homeless; and of them, 25.4% were literate.

This woman’s lonely subsistence reflects not only the pitilessness of the megalopolis but also its capacity to sustain such fragility. Her experiences, some of them unique to her and some that she shares with many others, reveal a different Delhi, with unconcerned as well as kind citizens.

One morning recently, two passers-by, Priya Arora and Rama Sharma, approached the woman; one gave her a bunch of bananas and the other a glass of sweet lime juice from a stall nearby.

“I have been noticing this aunty since the last two-three weeks,” says Ms Arora, who works as an economic analyst with a firm that has its offices on Janpath. “She reads the Ramayan with so much love. You could not help but smile.” Ms Sharma, a civil services aspirant who was on her way to the American Center library on Kasturba Gandhi Marg at the time, says: “I was walking from the Metro station when I noticed her. She is so decently groomed… she could be my dadi (grandmother). I continued to walk, but then I turned back and saw another girl looking at the old lady. I didn’t know Priya but we both decided to arrange some breakfast for aunty.”

On another morning, a pedestrian stopped to enquire as to why she was on the footpath. The woman said, “Don’t worry, beta (son). I have my Manas. Bhagwan (Lord) Ram is looking after me.”

A few mornings later, the woman could not be seen at her usual spot.

“She left a few minutes ago,” said a fruit seller across the lane. Checking the time on his mobile phone, he said, “She must be on her way to Madras hotel.” That building, home to showrooms and restaurants as well as drug addicts, is towards the Shivaji Stadium bus terminal, in another corner of Connaught Place. “Yes, I often see that budhiya (old woman),” said a parking assistant there. “She must be sitting at the Shivaji Stadium bus stand.” She wasn’t there either. Gesturing towards Hanuman Mandir, a betel-leaf seller said, “She is there, reciting Ramcharitmanas.” Outside the temple, a shoe-keeper said, “She stopped coming here a year back.” Referring to the Capital’s traditional protest square, she added, “Nowadays she sits at Jantar Mantar, next to a dosa stall.” The elderly woman could not be sighted at Jantar Mantar either. A sweeper said, “At night she sleeps outside Madras hotel.”

Finally, The Delhi Walla found her there at 9pm.

Sitting cross-legged on a blue plastic chatai (mat), the elderly woman said, “I was near the Mandi House Metro station during the day. I was resting. It was hot and there was no breeze.”

The neon signage of the adjacent PVR Rivoli theatre was blinking yellow in the night. The woman had unrolled her mat on the pavement beside a drive-in eatery known for its rajma chawal. The mat, which she picked up months ago from Jantar Mantar, where a protester may have left it behind, held all her possessions: a bag containing her single sari, petticoat and blouse; a pillow; a pair of slippers; a black umbrella; three mangoes; and a hard-bound copy of the Ramcharitmanas. “I bought it for 220 rupees,” she said of her book.

Published by the Geeta Press in Gorakhpur, it not only contains the story of the Hindu god Ram, but also a 100 rupees note, an old bank account booklet, and the registration card of an eye hospital.

The first page of the Ramcharitmanas has the owner’s name and address scrawled neatly in Hindi: “Ramrati Singh, village Singhortar, wife of Kallu Singh.”

Over the next hour, the woman, responding to a series of queries, drew a sketch of her life: “I’m from zila (district) Raebareli (Uttar Pradesh). I came to Delhi eight years ago on the Kashi Vishwanath Express. I was a Hindi teacher in my village’s school but my late husband was a drunkard who didn’t let me work, otherwise today I would have been getting pension. My five sons and one daughter are all married. They cannot properly feed even their children, so I left my village. I first lived for a few months at the Sangam in Allahabad. Then I went to see Bhagwan Ram in Ayodhya. From there I went to the temple of Mata Vaishno Devi and to Baba Amarnath. Then I arrived in Delhi. It is the Capital. It has ministers. (Congress president) Sonia Gandhi also lives here. She has again won (as an MP) from my district. I miss my sons but now I have become a sadhu.”

During her early days in New Delhi, the woman said, she tried to get an appointment with the Congress president. “I would daily sit outside Chaubis (24) Akbar Road (the party’s headquarters) but nobody talked to me. All I wanted was one meeting with Sonia Gandhi. She would have immediately recognized me and looked after my needs. Instead I ended up behind Regal building, living among beggars and drug addicts. One of them stole 5,000 rupees from my bag. I was left with nothing except the Manas. By then I had learnt to flow like a river. One day I walked to Hanuman Mandir, sat down in a corner with my Ramcharitmanas and started reading the dohe (verses). It made me feel nice. Now I’m not scared of anybody. Although Connaught Place is filled with bad people, especially at night, I sleep peacefully.”

A row of cars was parked along the pavement. Most were packed with customers who had come to sample the rajma chawal. Gesturing towards the dark shadows inside the cars, the woman said, “They give me dinner.” From behind the windshields people stared back at the woman, who continued with her tale, saying: “In the morning, the police constables give me bread. In the day, people sometimes offer me fruit.”

The pavement is a shelter to many other homeless people too. The woman was being watched, for instance, by three scrawny children, recent arrivals from Aligarh, a town around 150 km away from Delhi. A customer at the food stall bought two samosas and a mineral water bottle for the children.

Showing the registration card stamped with the seal of the Guru Nanak Eye Centre, a government hospital nearby, the woman said, “I was having difficulty with reading so last month I had an eye operation. I had to go to the hospital on my own. The doctors treated me for free. See, my eyes have sarkari (government) lens.”

The card mentions her age as 70.

On why she has started spending the morning hours in the lane near Barakhamba Road, she said, “So many people walk there during that time, and when they hear the name of Ram, they too are blessed for the day.”

A little later, the woman said she wanted to sleep.

The morning after, she was back at her usual place. “I’m in Sunder Kaand,” she said, referring to a chapter in the epic. Wearing a dupatta over her gown, she added, “If you read lines daily from this kaand, then no harm will come to you.” Not even in a place like Delhi.

[This is the 89th portrait of Mission Delhi project]